With a population oscillating at around 20 million, streets jammed with cars, and buildings that range from sublime to ridiculous, it is hard to imagine that Mexico City was, for many years, a model of urban development and civility. The “City of Palaces,” as it was once known, was orderly and planned, with uniform building developments that reflected the leading European design schools of the day.

The Mexico City we know today began as a rough sketch of an urban plan — attributed to Alonso de García Bravo, one of Hernán Cortés’ henchmen — incorporating two main axes at 90 degrees to the central plaza, with streets following a grid formation. The first constructions built on the vestiges of Aztec temples were fortress-like buildings that reflected the Spaniards’ fear of retribution after the massacre of the indigenous population. However, by the end of the 16th century, having established their dominance, the Spaniards began building more elaborate Plateresque constructions, an ornamental style typical of the Spanish Renaissance.

This style was soon to be replaced by the familiar Baroque buildings of the 17th century. Palatial mansions and elaborate churches of this period are scattered all around the city center and Coyoacán. Curiously, the design and structure of these residencies did not change much over the three hundred years following the conquest. The typical houses of the period were built around a central, quadrangular patio, which had access to the street via a large two-paneled door that allowed carriages into the central patio and then into a service patio at the back of the house. The exteriors of these grand residencies, decorated with elaborate stone carvings and gargoyles on the facade or around windows and corners, were an opportunity for the owners to flaunt their wealth and social standing. The windows usually opened onto ornate wrought-iron balconies and the main doors, the most important feature of the facade, were intricately carved and often flanked by pillars. One of the greatest examples of this extraordinarily lavish style is the Casa de los Azulejos (currently a Centro Histórico Sanbourns), built in 1751 for the Count of Orizaba.

The last quarter of the 18th century saw a break from traditional beliefs, a movement inspired by the Enlightenment. This turnabout brought with it the rejection of Baroque in favor of a more classical, rational style aptly named Neoclassical. This popular European trend filtered into Mexican architecture through the state’s first official school of architecture, the Academy of Arts. By far the greatest exponent of Neoclassical architecture in Mexico was Manuel Tolsá, who built the Palacio de Minería, which typifies the style with its Greek columns, pediment and balustrades.

Mexico’s War of Independence in 1810 brought an abrupt end to the short-lived Neoclassical period. Lack of funding marked a stagnation in construction for the first half of the century in general. Not until the period of opulence spurred by Porfirio Díaz’s presidency would Mexico City undergo a complete transformation and become the “City of Palaces.”

Porfirio Díaz oversaw a renaissance in terms of economic stability and prosperity, which was reflected in the proliferation of a large number of new neighborhoods, many developed on lands previously confiscated from the church. These neighborhoods, known as “colonias,” were designed to accommodate different sectors of society: The upper-middle classes moved to the grandiose Juárez, Roma and Condesa, while the lower-middle classes resided in San Rafael and Santa María la Rivera. It was at this time that vecindades, or small apartments built around a central patio, began to flourish – some converted from religious or colonial buildings.

The upsurge in investment during the time of Díaz and the influx of foreigners made for an eclectic architecture, strongly influenced by European art academics, particularly those in Paris and Rome. In his resolve to make Mexico City as grand as Vienna and Paris, Díaz built the Champs Elysees-inspired Paseo de la Reforma, and funded extravagant public building projects such as the Palacio de Bellas Artes and the Correo Mayor post office building. In the meantime, the bourgeoisie struggled to prove their wealth and culture by incorporating a great variety of European architectural styles into their homes, ranging from French and Venetian to Moorish, Greek, and even medieval influences. The Juárez and Roma neighborhoods were the best examples of this opulence, where vast mansions flanked wide, tree-lined avenues. Sadly, few of these monumental buildings remain in the Colonia Juárez, and though several have been renovated to their original glory in the Colonia Roma (the Casa Lamm or the Balmori building, for example), the majority have been severely neglected.

The tables turned once again in 1910 when the Revolution brought the extravagance of Porfirio Diaz’s presidency to an abrupt halt. With it came a tide of nationalism and the desire to recapture the architecture native to the Americas. Ironically, the style chosen to represent this period was a revival of the architecture of the Spanish colony, known as Neocolonialism, examples of which are found in the buildings designed by Juan Segura and Francisco Serrano in the Colonia Condesa. Other examples of this style can be found in the Centro Histórico. This movement, which also incorporated some pre-colonial motifs, sought to combine tradition with new technologies, but quickly succumbed to the radical architectural influences emerging from Europe in the form of Decorative Arts, better known as Art Deco.

In what was then a highly industrialized society, the idea behind the European Art Deco movement was to express modernity through greater purity of forms. The Art Deco trend hit big in New York City and, coinciding with the construction of the first skyscrapers, came to represent progress and optimism, which was quickly assimilated into Mexican culture. The Art Deco style is perfectly represented in the Colonia Hipódromo Condesa, which was urbanized by José de la Lama and Juan Basurto in 1927 on what was once a hippodrome. This became one of the most important urban projects in Mexico City during the first half of the century and included parks as well as an open-air theater. Art Deco houses and buildings integrated intense lineal geometry and massive voluminous walls perforated by small windows, as well as highly abstract ornamental designs that filtered down to the details of the accessories.

Coinciding with the Deco movement in the late 1930s was a curious style known as Californian Colonial. Enormously influential in Mexico City, this eclectic idea came about by mixing the internal spatial distribution typical of Californian mansions, with elements of the Mexican Colonial style of the 17th century. The result was an unlikely combination of large houses with clay tile roofs and extremely elaborate Baroque-type stone work around windows and doors, perfectly exemplified in the Polanco and Las Lomas neighborhoods. The Polanco area, including Parque Lincoln and the Pasaje Polanco shopping mall with its apartments on the upper levels, was entirely developed in this style by Francisco Serrano.

In the 1930s, a new generation of architects emerged from the Academy of Arts, strongly influenced by the Functionalist movement taking place in Central Europe that rebelled against the decorative style of the French Academy. The Functionalists called for a return to sincerity and simplicity in architectural design and implemented the now-clichéd maxims of “form follows function” and “less is more.” Juan O’Gorman and José Villagrán led this radical new school of design in Mexico City. However, given the stark appearance of the buildings — the house and studio of Diego Rivera in San Angel is a prime example — Functionalism was soon assimilated into a new, more esthetic school known as the International style. Influenced by O’Gorman, it remained popular well into the ’70s. Mario Pani was one of the most important exponents of this style, and while he maintained the functionalist ideals of space and structure, Pani focused on combining textures, colors, and materials for their esthetic effects. It was this style, now identifiable as the architecture of the 1950s, that was adopted for the development of the Colonia Anzures.

The legendary Mexican architect Luis Barragán began designing as a Functionalist, but was influenced during the 1950s by calls for an architecture that provoked a more emotional reaction. While essentially remaining a functionalist for the rest of his professional life, Barragán integrated intimate interior spaces into his architecture and sought to draw exterior spaces into the interior of the house. Although no large urban developments were built in Barragán’s style, his design techniques and pioneering use of color had a profound effect on architecture in Mexico and he is generally considered to be the founding father of what is today considered “Mexican architecture.” This all-encompassing term is generally associated with buildings such as the Camino Real Hotel built by Ricardo Legorreta, which involves austere interior spaces, bright patios, simple geometry of forms, and most importantly, dazzling colors.

Sadly for the city and for those who live in it, the predomination of a particular school of architecture in Mexico City came to an end around the middle of the 20th century when urban development regulations slackened and variety in architectural expression became the order of the day. It was this turn of events and a massive population explosion that ushered in the decline of planned urban development and the architectural free-for-all that the city has become. Nevertheless, Mexico City still has a great deal to offer in terms of architectural interest, be it in the vestiges of the grand old styles or in the cutting edge of new design. 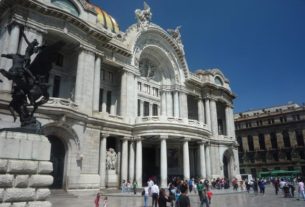 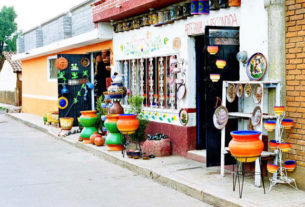