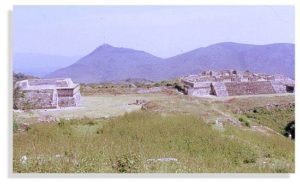 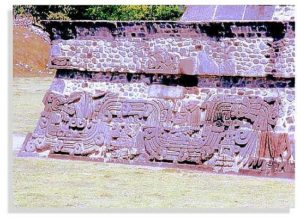 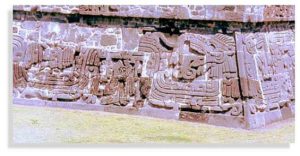 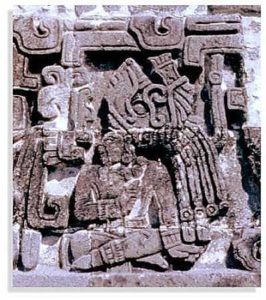 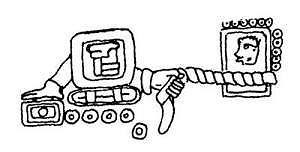 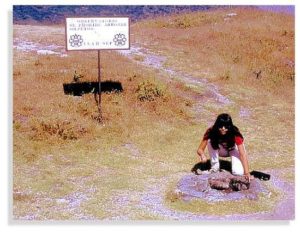 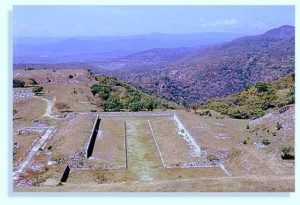 Several ancient civilizations developed astonishingly accurate calendars. Even so, occasional adjustments were needed to bring the calendar back in line with solar events. Archaeologists studying the site of Xochicalco, just outside the city of Cuernavaca in central Mexico, believe that a major conference of astronomers was held there in the eighth century A.D. in order to implement an adjustment of six days. The conference may have been a sequel to an earlier astronomical gathering (700 A.D.) held in Copán, in modern-day Honduras, commemorated at that site by a richly-decorated altar. An altar may have been good enough to commemorate the Copán gathering, but in Xochicalco the organizers went one stage further and built an entire lavishly decorated pyramid as a memorial to the event.

The scenic and imposing ruins visible at Xochicalco today reflect only a small proportion of what was formerly a much more extensive city. The name Xochicalco means “place of the home of the flowers”, and perhaps the city was once flower-bedecked, but nowadays its flattened hilltop platforms are decidedly semi-arid in character. Numerous constructions, linked by cobblestone tracks, rise above the platforms; they include palaces, temples, ball courts and more than one “observatory”.

The central plaza is graced by the amazing Pyramid of the Plumed Serpents. Relatively small (only about 6 meters tall), it has two levels and may have been roofed at one time. Its talud y tablero style (with a gently sloping lower section surmounted by a vertically-sided table) echoes many of the buildings at Teotihuacan. This is probably no accident. Researchers believe that Xochicalco, first settled around 200 A.D., reached its peak only after the decline of the influential city of Teotihuacan, which, at its height in around 750 A.D., was one of the world’s largest cities, with an estimated population of 500,000.

The Pyramid of the Plumed Serpents ( Pirámide de Quetzalcóatl) derives its name from a series of eight plumed stone serpents that wind around its base. Their sinuous bodies frame magnificently adorned seated figures. The serpents appear to be swallowing sun disks, a reference to solar eclipses. Traces of original pigment show that the panels were once colored. The details of jewelry, shields and headdresses suggest the figures represent high-standing officials of some kind, perhaps the astronomers themselves. The second level of the pyramid is decorated with pairs of seated figures.

Close examination reveals that the styles of the figures on each side of the pyramid are very different. The styles reflect four different major regional cultural groups of the time: the Maya (southern Mexico and neighboring countries), the Zapotec (Oaxaca Valley), the Teotihuacanos (central Mexico) and the Totonac (Gulf coast of Mexico). Presumably, astronomers from all four cultures met here (on neutral territory?) and this unusual monument was built to commemorate their success in finding a solution to a calendar that had become out of sync with the natural year.

According to Roberto Salido Beltrán, this calendric fix was to suppress six days of the ancient calendar, between day 1-Casa (One House) and 11-Mono (11 monkey). Salido cites as his main evidence a glyph centered on the sign for a house. Two hands reach out from this glyph. The right hand, fingers outstretched, rests on a block. The left hand holds a cord leading to the glyph for 11-monkey. In terms of our calendar, this event occurred in 765 A.D.

Xochicalco remained prominent until about 1000 A.D., after which it was abandoned. When the Spaniards arrived in the sixteenth century, they learned of the ruins, but had no inkling of their astronomical significance.

In the past twenty years or so, several other major findings have arisen from studies of Xochicalco’s astronomical importance. The site lies at a latitude of 18o47″ North. At this latitude, the sun is at its zenith (highest point, exactly overhead at mid-day) on May 15 and July 28. It is well documented that observing (and celebrating) the solar zenith was very important throughout Mexico at the time the Spaniards arrived, even though modern attempts to revive the ancient practices have not met with much success.

Two of the many natural underground caves at Xochicalco, show clear evidence of architectural modification, including the perforation of an artificial hole or “chimney” from the cave to the ground above. These vertical shafts would have enabled very precise observations and measurements of solar and possibly planetary events. For instance, the vertical north side of the 5-meter-long “chimney” down into one cave would have resulted in a precisely vertical beam of sunlight on the day of the zenith. The south side of the chimney slopes at an angle of 4o23′. Is it simply a coincidence that this is the exact angle for light to be parallel to this side on June 21, the day of the Summer solstice? Archeo-astronomers think not!

The dimensions and geometry of this chimney ensure that some light enters the cave every day from April 30 (15 days before the first of the two annual zeniths) to August 12 (15 days after the second). Put another way, the cave receives light every day from precisely 52 days before the solstice to 52 days after it. The number 52 was of immense significance in the pre-Columbian calendar, since it took exactly 52 (solar) years for both the solar calendar and the ritual calendar (of 260 days each) to return simultaneously to the equivalent of 0-0.

Another fascinating finding, first published in México Desconocido, is that from the “Acropolis” of the site, on zenith days, the sun rises exactly behind Popocatépetl volcano on the eastern horizon. The effect does not occur even one day before or after the zenith. Given the polluted skies over Mexico City, it is difficult to guarantee witnessing this effect nowadays!

The site of Xochicalco is living proof of one of the most important scientific summits ever held in the history of the Americas. The congress of astronomers from all over the zone held to agree the calendric correction was a landmark event in the history of science worldwide.

Xochicalco is a fascinating place to wander around. Let your imagination wander. Imagine the astronomers and their cohorts engaged in deep philosophical discussions. How many days do we need to skip in order to correct the calendar? How are we going to convince the general populace that the fix is needed?

An excellent site museum at the entrance helps visitors appreciate the site’s significance. Around the site, interpretative signs provide basic information in English and Spanish. The site is open 9 a.m. to 5 p.m. daily; a modest entrance fee is payable except on Sundays and public holidays when access is free.

Xochicalco is 38 kilometers south-west of the city of Cuernavaca, 90 kilometers south of Mexico City. From the local bus station in Cuernavaca, a regular inexpensive local service signed “Cuautepec” leaves every 30 minutes and passes the entrance to the site. All times should be checked locally.

This article is the basis for Chapter 2 in the author’s Mexican Kaleidoscope: myths, mysteries and mystique (Sombrero Books, 2016).