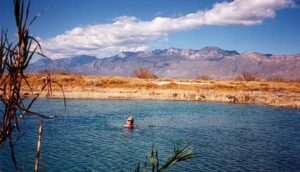 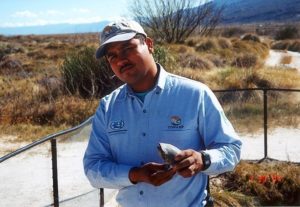 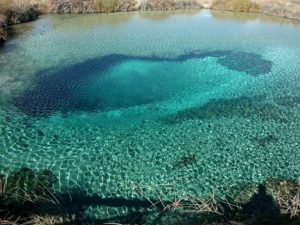 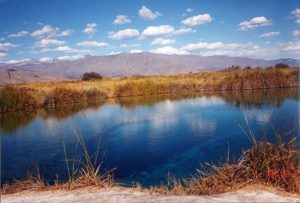 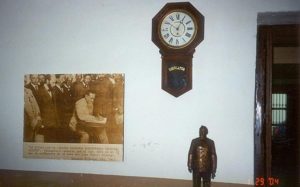 Sitting in bathtub-warm water in the middle of the desert looking at the surrounding mountains under a deep blue sky is a delightful experience. We are in the Cuatro Ciénegas Nature Preserve just outside the town of Cuatro Ciénegas, northwest of Monclova in the state of Coahuila.

This Area of Protection of Flora and Fauna is so designated by the Mexican Federal Environmental Oversight Agency because it has unique plant and animal species. It comprises over 843 square miles and around 200 pozas, or ponds.

The desert setting gives a spacious feel and the ponds seem to welcome you like an old friend. There is a disconcerting feeling of being pampered in the midst of the stark surroundings.

Cuatro Ciénegas means “four marshes” and refers to the topography of this land in the Chihuahuan desert. The source for the marshes and pozas are thermal springs in the nearby Sierra San Marcos mountains.

In the town there is a tourist center in the municipal building on the central plaza. Tour guides in your own car may be arranged or regular tours of the area may be available if there are enough people. If you want to go onto the dirt tracks that cross the desert a guide is recommended The office headquarters for the nature preserve is just up the street from the plaza on Calle Zaragoza. It has minimal information for the casual tourist on the Preserve but does have scientific information on research in the area.

The visitors’ center for the preserve is 7 km. south of town on Highway 30, leading directly south from the main plaza. The helpful attendant at the center showed us unique hinged turtles ( terrapene coahuila) that are native to the area. The lower shell of the turtle is hinged about 1/3 of the way back so that after it has pulled itself into its shell it can close up completely.

Behind the center are several ponds and a self-guided nature walk. Information on small signposts along the path identifies the vegetation there. Lechugilla, creosote bush, saltbush, ocotillo and more can be seen. A hike about 1 km. long leads to a picnic area and another blue, blue pond. No swimming is allowed in this pond because of the fragility of the aquatic ecosystem.

You can swim at Poza La Becerra, a balneario 18 km. south of town on Highway 30, past the visitors’ center. La Becerra has extensive picnic grounds, camping area, changing rooms, showers and toilets. The pond is quite large and is roped off into sections for swimming.. The water is warm and the bottom is firm. The water is so clear that you can see the schools of little fish gathering around your feet.

Behind the La Becerra office there is a path that leads out through the dunes. A big jackrabbit jumped out from the bushes in front of us and hopped away on his important business. It may be possible to see coyotes, road runners and scorpions.

We didn’t have time to visit Rio Mezquites balneario which is 9 km. south of town, on 1.5 km. of unpaved trail off the same Highway 30. It, too, is reported to have nice camping and swimming.

Near Poza La Bacerra at marker 25 km and 4.5 km off the paved road is an area called Laos Arenales where the dunes of fine white gypsum sand are reported to be 6-10 meters high.

The Rio Mezquite, Nature Preserve’s Visitors’ Center, Poza La Becerra and Las Arenales sites are easy to find – on or just off Highway 30 which heads south directly from the main plaza in the center of the town of Cuatro Ciénegas.

The town of Cuatro Ciénegas (pop. about 10,000) is a pleasant, tranquil spot. It is laid out in straight lines around the central plaza and is easy to navigate and small enough so that all points of interest are in easy walking distance from any of the hotels. The central plaza is typical of Mexican small towns being green and with a friendly feel. Government buildings and church are on the west side, shops on the north and south sides and three restaurants on the east side.

Besides the nature preserve, Cuatro Ciénegas’ claim to fame is that it is the birthplace of Venustiano Carranza. One of Mexico’s many presidents, Carranza was born as one of fifteen children to wealthy landowner parents. He served as municipal president, state legislator and state governor under Porfirio Díaz. Later he joined with Francisco Madero to plan a rebellion against Díaz. He initiated the Plan of Guadalupe terminating the dictatorial rule of Victoriano Huerta. In 1917 he was elected president and was killed in 1920 fleeing another rebellion.

The house where Carranza was born is now a museum located on Calle Zaragoza near the plaza. The rooms of the house hold exhibits and pictures about his life. The great-grand daughter of Carranza’s sister is the director of the small museum and was delighted to show us around. We had the feeling that they get few visitors from the U.S. and they went out of the way to answer any questions we had.

The Casa de la Cultura, several blocks from the plaza may be worth a short visit if you have extra time. The building itself was Carranza’s own home but now has one room of early indigenous artifacts and another small office with some photos of the area. The rest of the building surrounds a courtyard and houses classrooms and workshops for art and cultural activities.

We stopped in the morning and the caretaker told us that there would be a sculpture exhibit there that evening. When we arrived at 6 p.m. chairs were set up in front of a podium and the program began with a short lecture on the history of sculpture. There was a greeting by the director giving special mention to foreign visitors! Then there was an original guitar and song composition about Cuatro Ciénegas followed by an impassioned poetry reading promoting the care of the environment and world peace.

At this point we were wondering about the exhibit but then the audience all moved to a large room in the back of the house where some dozen sculptures of Juan José Martínez were set up. Martínez is of local origin and has become quite well known throughout Mexico.

Again, we were made to feel most welcome. A number of different people said ‘bienvenidos’ as we enjoyed the buffet supper provided. The director of the Casa de la Cultura took our picture and obviously, here also, Americans may be an unusual occurrence.

All in all, Cuatro Ciénegas makes a worthwhile stop. We used it to break our journey from the northern U.S. and between the friendly town and the interesting nature preserve it was well worth it. Although we were conversing in Spanish with people, we assume that many have enough English to help visitors.

How to Get There

Cuatro Ciénegas is located approximately in the middle of the state of Coahuila on Highway 30, 80 km. northwest of Monclova. South of San Antonio you can cross the border at Eagle Pass/Piedras Negras and continue on Highway 57 until a marked turn-off 40 km. north of Monclova. From the south access is by way of Monclova/Saltillo or Torreón.

There are four hotels in town and we checked out three of them. Hotel Ibarra where we stayed is one block off the plaza with only a small sign. The entrance is on a side street into a large parking area. The rooms are large and plain holding two double beds, a table and chairs, bathroom (with shower curtain and toilet seat – sometimes missing from cheap hotels) and cost 300 pesos in January 2004. Hotel Santa Fe is some 6-8 blocks east of town on the road coming in from Monclova and is also basic for 295 pesos. Hotel Plaza on Ave. Juárez is slightly more appealing for 450 pesos. We were told that hotel reservations are probably not necessary except for Semana Santa (Holy Week), when everyone in Mexico is traveling, and Feria de la Uva (Grape Festival) which is the last week of July and the first week of August.

There are three restaurants on the east side of the plaza and another connected to Hotel Ibarra. Basic Mexican fare is offered at all three.