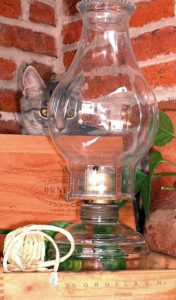 When we moved to Mexico in 1976, I didn’t regret leaving behind the Alpha Beta Supermarket, the 7-11 quick-stop, or Newport Mall. I had no qualms at saying good-by to the traffic on the South Coast highway, or the swiftly disappearing charms of Laguna Beach, California. And I was especially weary of watching the heavy machinery gobbling up trees and slicing off the tops of gentle hills only to make way for more flimsy wooden boxes, destined to topple in a few years. Totally content to turn my back on the sights and sounds of southern California in the final quarter of the last century, I yet sensed I had a great deal to learn about my newly chosen homeland. Where all had been too boringly familiar, now I was a stranger in a fascinating but often incomprehensible new country.

Many of the village stores used to offer what seemed to be only a very few items for sale, and there were often no signs advertising their wares. The villagers simply knew where to go when they needed something. At Navarros Popular Abarrotes, a number of clerks were kept scurrying with the customers orders, from the narrow front counter, to the vast bodegas at the rear, and back again with the requested items. Near the doors, in front of the counters, large barrels cradled the basics of beans, grains, soaps, etc. But I learned I must speak up if I wanted candles, nuts, raisins, matches. Since few things were already packaged, I also learned to ask for purchases by amount or weight. Almost never was I met with that discouraging phrase, No hay.

During the early months, I often was accompanied by our friend John. He had already lived in the village for a number of years, and I couldn’t have wished for a better guide. The day he accompanied me to the Deportista, on the village plaza, I was in search of petroleum lamps. 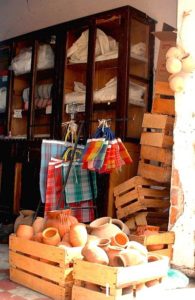 The elderly owner of the Deportista, upon hearing my request for the lamps, creaked to an upright position and rose from his small, hand carved chair in what seemed to me an otherwise empty establishment. Poco a poco, bit by bit, he began to search and then retrieve the various components of a petroleum lamp. The glass base repositories for the fuel were hidden deep under the worn wooden counter. The delicate, curvaceous chimneys were lifted from a dusty shelf far at the back and given a gentle swipe with a cloth. And finally a nearby drawer produced the necessary mechón, or wick, in a roll which I would then cut to the required lengths.

When the shopkeeper was finished, the proper parts for five complete glass petroleum lamps were lined up in a row on the counter in front of me. “Wonderful,” I said, “I’ll take them all!”

At that moment John touched me on the elbow and spoke up. “Uh, Phyllis, have you really thought this through? Are you certain you need, or can use, all five lamps?”

“Well,” I replied, “the ceilings are so high, Id need at least two just for the sala, one to carry to the kitchen or the bathroom, and being glass they’ll probably get broken easily. And besides, they are so inexpensive.” I wasn’t quite sure what John was getting at, so I added, “I’d think, after all the time and effort he went to, finding and assembling the lamps, the owner would be happy if I bought them all.” 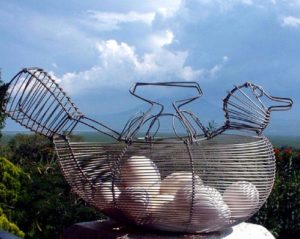 “Yes, perhaps,” John replied, “but there’s a point I believe you haven’t considered. Five minutes after you buy these lamps and we leave, or maybe it will happen tomorrow, a little old lady will break her only lamp and hobble here with her few pesos to get a replacement. But when she arrives, she’ll be out of luck, because you will have taken them all, down to the very last one.”

I wasn’t yet familiar with village laws of supply and demand, with how long it often took the stores to restock even vital medicines. Anything could suddenly become mysteriously escaso and remain scarce for months.

But John’s point wasn’t, I sensed, simply a lesson in village economics. We purchased four of the five lamps and left the Deportista.

These days we are blessed, one might say, with supermarkets, computerized replacement in many establishments, even home delivery of medicines and pizzas. But though the village has trudged forward a century or more in just 28 years, I still find myself incapable of making any purchase without leaving at least one sample behind. I leave it there for that shadowy figure, tiny and hunched, with slippered feet, enveloped in her large black rebozo. I leave just one behind, for that nameless, but needy, little old lady.

Lake Chapala: attractions for all