Some days are better than others. Visa days are hardly ever good, filled as they are with anxiety and uncertainty. All this visa business seems so silly to me, and so costly, and so inconvenient. Why can’t I just live here in peace? It’s enough to drive a person to drink…


Welcome to the ripoff zone: Talisman, Chiapas, Mexico. Across the bridge: Guatemala. Across the street: Oficina de Migracion (Mexican Immigration). Hold tight to your wallet, we are about to be Hoovered for every cent — or centavo — that can be cajoled, threatened and lied out of us.

Foreigners traveling in Mexico on Tourist visas may stay in Mexico for no more than 180 days. Therefore, every five-to-six months, I cross a border (Mexico has three: U.S., Guatemala, Belize) and re-enter, to obtain a new visa. Likewise for a foreign-registered automobile. In August, 1994, I entered through Laredo (Texas) / Nuevo Laredo. Aside from the confusion of having to find the right buildings without benefit of signs, the treatment I received from the eight or so officials, clerks, bureaus and cashiers was courteous, honest, and relatively (2 hours) swift. So far, so good.

In September, a buddy asked me to accompany him on a business trip to Guatemala. We exited Mexico through Ciudad Hidalgo, close to the Pacific coast, and everything went smoothly. We spent a week in Guatemala, and returned through Talisman, on the Pan American Highway. When we got to Mexican Migracion, there were three clerks behind the counter. As soon as we walked in, the Jefe (chief) dismissed the other two and took personal charge of our processing. He took us down to the far end of the counter, away from the ears of his subordinates. He told us that the rules prevented him from giving us the normal 6-month visas. He cited Rule xx.y of the Visa Code (while neglecting to mention that it had been canceled six years ago). This rule allowed six-month visas only to those who entered from their own countries; people who entered from third countries were entitled to only 1 month. However, if we were willing to pay a “tax” of $20 u.s. for each additional month, a six-month visa could be arranged. My pal , who had been living in Mexico as a tourist for five years, said it was a shakedown, and he would not pay. El Jefe was clearly astounded. And personally hurt. We stood our ground. A one month visa was issued. Nobody was happy.

When we got to Oaxaca, we went to the local Migracion office and had our visas extended. The clerk shrugged. Yes, she knew of this official, who was said to be corrupt, and of course something would have to be done about him, but what? He is in Chiapas, far from the seat of government. She is in Oaxaca. Alas.

Now it is February, 1995. My car’s permit is about to expire, although my personal visa has another six weeks to run. I have already gone to the Hacienda (the bureau in charge of car permits) and turned in my old permit. Last stop: Migracion in Talisman, Chiapas. And guess who is behind the counter — and bearing old grudges…

“I remember you. How did you get the visa I gave you extended? Do you work in Oaxaca (a no-no for tourists)?” I point out that this is not information he is entitled to, especially as I am attempting to leave, not to enter his country. “Do you know about Regulation aa.b?” Huh? “It requires that you remain out of our country for 15 days before you can re-enter.” Jeez, what a sorehead. “I will remember you, senor. Enjoy your stay in Guatemala.”

I return to my car, to find a crowd around it. No, they are not admiring it (even though it is a “classic” 1967 Barracuda convertible); in fact they all have their backs to it. There are seven boys under 10 years old, all of whom are demanding a peso for “watching the car”; ten licensed official money changers, eager to sell me inflated Quetzales (Guatemalan pesos); three pairs of licensed “tourist guides”, all promising to make my trip to and through Guatemalan officialdom safe, clean and brief. I choose the oldest pair of guides, and ask them if they can also get rid of all the other people. They pass this on to the others. Nobody moves, except for the kids, who crowd around closer and raise their voices. “Get in the car”, I say to my guides. “I have hired them”, I say to the other guides. “I do not wish to exchange any money”, I tell the moneychangers. I give the biggest kid two pesos, and he tells the others to get out of the way. Ahead: the Guatemalan border. Hang on to your wallet.

First stop: the fumigation station. It wouldn’t do to give a Mexican insect a ride into Guatemala, since they don’t have any money. A little DDT teaches them a lesson: walk or die. “It’s 20 pesos”, says my official, licensed guide. “Give it to me and I’ll pay”. No, that’s o.k., I’ll pay. Eleven pesos, says the official. My guide smiles at me. Next stop: the Guatemalan car-permit station. “Two hundred Quetzales”, says my guide. “One hundred fifty Quetzales” says the clerk. Last stop, for my personal Guatemalan visa, costs fifteen Quetzales instead of my guide’s fifty.

Final negotiation: the fee for my guide (and his non-talking “partner”). Whaddya mean, a hundred Quetzales? When I hired you, you said twenty-five. “But you got extra service, and two people.” Yeah, besides which I didn’t let you skim off extra money. OK, here’s 25 apiece, lemme out of here!

Guatemala turns out to be three days of spectacular mountain scenery, malfunctioning brakes, and hours on end in garages that ALMOST fix the problem. I promise the Powers That Be that I will sell this car the next time I drive back to the States (and in June 1995 I do).

Time to go back home to Oaxaca. I return via the coastal route (Ciudad Hidalgo), hoping my pal the Jefe doesn’t get rotated out of Talisman. Here comes the Mexican border, and Migracion. Sitting behind the counter, a guy in aviator sun glasses, a military brush cut, and uniform creases that could cut wood. “Passport!” in a voice that would do a Gestapo agent proud. A stone face swivels up. “How long you want to stay?” As long as I can. I watch as he writes “180 days” on the visa. Yeah! Next day, I am home again: another six months in Paradise. 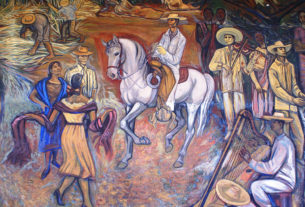