Readers of MexConnect ask exciting questions about Mexico, about sea to shining sea, the mountains and most of the villages in between.

Where to live, where to visit, where to park in Guanajuato? Own or rent and what to eat on the streets? Should I drive or take the bus? How about health care and bandits and topes?

I try to answer all I can and hand off tough ones to experts.

Today is a variety pack:

Question: What in the world is the tuna war?

Answer: In the political arena, far from ocean depths, is an arm-wrestling match between Mexico and the United States over how to net tuna without killing too many dolphins.

As usual, the U.S. has the stronger arm. For 20 years, it has banned the import of tuna caught the Mexico way.

Mexican fishermen claim they changed tactics long ago. The U.S. didn’t notice. Nobody bothers to clarify whether the blockade is to protect dolphins or the U.S. tuna industry.

Mexico, finally fed up with the closed market, turned to the World Trade Organization for a ruling. The WTO said Mexico is clean enough.

The U.S. said so what and did not change the little label on cans. Save the dolphins. No Mexico tuna north of the border. Glad you asked.

Answer: Oh boy, judging by the joy and noise, Mexicans celebrate dozens of giant holidays. Most any excuse is good for a day off from work, a neighborhood fiesta and late-night fireworks.

Among the really big ones, Easter appears to be No. 1. Our community takes it very seriously.

Christmas is more family oriented here than north of the border. I once said it is less commercial but that is changing. The MEGA supermarket in San Miguel de Allende started putting out Christmas merchandise on August 25.

Considering Mexicans start with the posadas and stretch the Christmas spirit into January or February, it is the longest holiday season in the world unless you count football season.

Thanksgiving turkey and cranberry sauce is a gringo thing. If the pilgrims had known about mangoes, they might have landed here.

The Day of the Dead is not a conventional holiday but it is an intriguing cultural event. My Mexican friends describe it as beautiful, magical, mystical, religious and pagan — all at the same time.

Mexicans accept death as part of life. They honor, mourn and celebrate. They mix in respect, humor and mocking bravado.

* * * * *
Question: Sometimes you tell “only in Mexico” stories. Are any available today?

Answer: There is an almost endless supply of believe-it-or-nots.

How about the man who tried to float from Mexico into the U.S. on a duffel bag filled with marijuana? The Border Patrol fished him out of the Pacific near San Diego. He said he was on a special delivery swimming assignment. Pot value was supposedly $23,000.

Another man climbed into a truck and burrowed into the load of red chili peppers with the idea of a free pass across the border. He didn’t think pale-skinned guards would get too close to the hot stuff but electronic inspection spotted him and his bottle of tequila. Customs agents rescued him and it.

Ecatepec police chief Carlos Ortega Carpinteyro has been dealing with accusations of traffic cop corruption. His solution was to hire women as replacements.

The chief said women are more trustworthy, take their oath of office more seriously and don’t hold their hand out for bribes.

He has identified one problem with female applicants: “We get too many short and fat ones. We need tall women that render respect when out in the streets.”

Others have found a problem with Carlos. The mayor is asking questions about sexual harassment and an alleged assassin hired to calm a critic.

Only in Mexico and maybe Chicago.

* * * * *
Question: How did Mexico solve the problem of spelling errors in school textbooks?

Answer: It didn’t but it will do better next time. There were only 117 multiplied by the millions of published books — just enough to trigger an eruption from Public Education Secretary Emilio Chuayffet Chemor.

He is still trying to determine who was responsible.

“I have said it before and I’ll repeat it again, this is an unpardonable error,” Chuayffet Chemor said again. “We can’t have quality education if our textbooks lack precise use of language.”

Spelling is not a new problem. Many of the plaques and collectibles at the colonial-era education building in Mexico City have spelling errors. Oh my.

* * * * *
Question: I saw something on TV about dinosaurs in Mexico. Have you seen any?

Answer: OK, I am old but not that old. There is a story about paleontologists discovering a fossilized tail of a duck-billed dinosaur near the small town of General Cepeda in Coahuila.

Francisco Aguilar of the National Institute for Anthropology and History said the tail is 15 feet long, 50 vertebrae intact. Other bones, including a hip, were nearby.

Aguilar said the remains are 72 million years old. I have trouble counting birthdays. How could he be so precise?

Scientific name for the old duck-bill boy is hadrosaur. Bet you didn’t expect me to know that.

Answer: Careful now, you are getting very close to personal. In fact, I do own a black sombrero. I don’t wear it very often. I’ve been told that the combination of a sombrero and an old gringo with white whiskers and not much hair on top might be mistaken for a total idiot.

Or worse yet, a tourist. 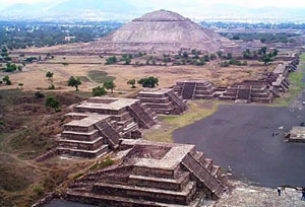