A Mexico book by John Scherber 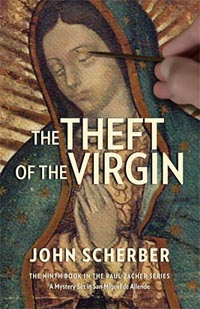 The Theft of the Virgin
By John Scherber
Outskirts Press, Inc., 2012
Available from Amazon Books: Paperback

The Theft of the Virgin is the ninth book in John Scherber’s Murder in Mexico series. Others include titles like Twenty Centavos, The Fifth Codex, Vanishing Act, and Daddy’s Girl. He has also published the first two titles in his The Townshend Vampire Trilogy: And Dark My Desire and And Darker My Wrath. Scherber fell in love with San Miguel de Allende and moved there permanently in 2007, described in San Miguel de Allende: A Place in the Heart… Expatriates Find Themselves Living in Mexico.

Scherber tells a good story. In The Theft of the Virgin, sixty pieces from the popular Vergruen Reference Collection of outstanding masterpieces of art — all forgeries — are on temporary display at the Bellas Artes, a prominent art school in San Miguel de Allende. “A favorite pastime,” of those who see pieces from the collection, “is trying to guess how each faked picture falls short of the original.

Paul Zacher, one of many talented artists in San Miguel de Allende, is our protagonist and for the most part our narrator; and Paul has actually painted some of the old masterpieces, reproduced them, not to create forgeries to foist upon the public, but “just to learn the techniques of the masters.” Paul likes to study forgeries: “When I look at the work of a forger, I love to observe what things he misunderstood about the painting that made his version come up short.” As Paul was about two-thirds of the way through his tour of the collection of forgeries, he “stopped abruptly before one that I knew much more intimately than any of the others. The picture was not a fake. It was the last thing in the world I expected.” The Georges de la Tour picture titled St. Jerome was one he was intimately familiar with since he himself had copied it in his student years; here, Paul knew beyond doubt, was the original, worth millions, and now on display in a collection of forgeries where nothing was valued at more than five-hundred dollars.

After a hostile meeting with Dr. Bernard Glass, the director of The Vergruen Reference Collection, Paul meets with his team that makes up the Zacher Agency, headquartered in San Miguel de Allende, “an occasionally successful detective shop.” He has two employees: Cody, his retired cop friend from Peoria, and Maya, his longtime girlfriend. Maya “had the ability to beckon you with one hand even as she held you at arm’s length with the other.” Although she loves Paul, he realizes that “She felt that disorder, even chaos, hung in wreaths around my head.”

His recognition of the original Georges de la Tour painting is further confirmed when there s a break-in one night of the show clearly titled “Great Fakes and Forgeries.” The stolen picture was reported to be valued at $400, although Zacher knew it was worth between 4 an 7 million dollars. Zacher suspects a scheme that is putting originals into the hands of very amoral and very wealthy collectors.

What virgin does the title — The Theft of the Virgin — refer to? Well, one glance at the cover and it is clear that it is Our Lady of Guadalupe, the figure and image held most sacred throughout Mexico and in fact throughout Latin America. And this famous image of the virgin is soon going to be loaned to the cathedral in Guadalajara.

Most readers of Mexconnect know the story of Juan Diego, who on December 9, 1531, saw a vision of a young woman who instructed him to build a church on that barren hill. To help him convince the bishop, she gave him roses, out of season, to fill his poncho, or tilma. When he opened his poncho, the cloth showed a picture of the lady, now known as Our Lady of Guadalupe, the patron saint of México. That tilma is “the greatest pilgrimage destination in the Americas.” Some consider it to be “the only heavenly relic in existence on earth.”

Paul, with the help of Cody and Maya and a psychic named Sheila, begins to uncover this new scheme, a plot to switch the irreplaceable and priceless Guadalupe with a forgery.

Paul says to Maya, “Would he really have the outrageous guts to do that?”

And with that, I will leave all of you lovers of mysteries hanging….