Nochebuena, the Mexican name of the flower English-speakers call poinsettia, was discovered in Taxco and the valleys surrounding Cuernavaca. Known by the Aztecs in their native Nahuatl language as cuetlaxochitl, it is believed that they brought the plant from the tropical climate of Cuernavaca to their Aztec highlands for cultivation in special nurseries. Prized in the prehispanic era for the curative properties of the milk that dripped from the leaves, stems and flowers when cut, the pigment from the red leaves was also used to dye cotton fibers.

After the Conquest, the Spanish Franciscan priests posted to the Taxco area used the plants to decorate their Christian nativity scenes, creating its first link to the Christmas season. The nochebuena gained further attention when Hernando Ruiz de Alarcon, a resident of Taxco and the brother of a famous Spanish writer, Juan Ruiz de Alarcon, wrote poetically about the flower and later, when it captured the attention of the Spanish botanist Don Juan Balme.

Its greatest promoter, however, was Joel Roberto Poinsett (1770-1851), who served as the U.S.’s ambassador to Mexico following Mexico´s Independence from Spain. Although his record as an ambassador is generally agreed to be mediocre, he cherished Mexico and fell in love with the plant when he first saw it in 1823 adorning the churches of Taxco. He sent plants to decorate his mansion in Charlestonville, South Carolina, one Christmas, and upon his return home several years later he was astonished to find the entire town growing the Christmas flower, or “poinsettia”.

Poinsett began propagating the plant and dedicated the last years of his life to making the “poinsettia” the Mexican symbol of Christmas throughout the world. His dedication earned him a fortune even though the plant´s translated Nahuatl name ( flor que se marchita or the flower that wilts) correctly described one of its drawbacks. (Every Mexican gardener knows that the nochebuena wilts within a few minutes after it is cut, making it unsuitable for bouquets.) The former ambassador gained a greater success, however, when its original Latin name euphorbia pulcherrima was changed to poinsettia pulcherrima. Today, millions of dollars of poinsettias are sold each year throughout the world to herald the Christmas season. 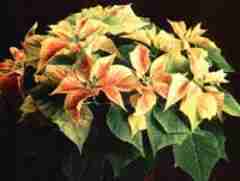 At one time or another, most everyone has either received or given a poinsettia as a gift during the Christmas season. Without question they are very beautiful. OK, it’s mid-January, the once beautiful foliage has dried up and fallen off, the soil around the roots is so dry that it makes the Sahara look like a swamp. Now what?

At this point most people simply throw the plant away, pot and all. In fact, The poinsettia has been described as a ‘disposable plant’.

By ‘disposable plants’ is meant a whole range of plants that will only last for a short time indoors. A good example is the potted chrysanthemum sold by many florists. With assistance from artificial light and darkness, the plants are forced into bloom. They are sprayed with substances to stunt growth. You then buy the plant in a beautiful flowering state. Enjoy it while the flowers last for after they are gone, there is little to do but throw it away. With watering you can prolong the existence of the plant, but nothing will get the plant to bloom again. In the summer you can plant the chrysanthemum out in the garden. The growth inhibitors will be worn off by that time, and it may grow into a rather large plant, that will probably freeze the next winter because it is not hardy. Occasionally somebody succeeds in bringing a poinsettia into bloom a second time, for this is not completely impossible in home conditions. But 95 percent of them end up in the garbage after Christmas.

Having TWO green thumbs, you decide to give it a shot. Here’s how:

Cut back the plant to half its size and keep it cooler, about 54°F (12°C). After some time, new shoots will appear. Then repot and grow warmer. Bring it outside if possible in the summer. Feed once every two weeks with a fertilizer that contains micronutrients. Growth stunting hormones will keep the plants small. To get the plant to bloom a second time, it will need absolute darkness for 14 hours a day, for two months. If you do not provide them with darkness, the plants will bloom later than Christmas, sometime in the spring. 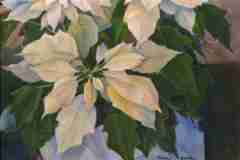 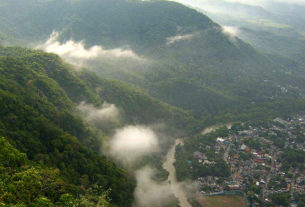