Note: This article is an edited extract from chapter 6 of Geo-Mexico: the geography and dynamics of modern Mexico, by Richard Rhoda and Tony Burton (Sombrero Books, 2010).

Though parts of northern Mexico are arid, the country as a whole receives an average of 760 mm of precipitation a year (slightly over 30 in). This is a considerable amount, more than that received by either Canada or the USA. However, 73% of Mexico’s rainfall either evaporates directly or evapotranspirates through plants. About 25% runs off into rivers and lakes. Only roughly 2% seeps down to recharge subterranean aquifers.

Availability of water per person is a function of population size and the total amount of water available. Though Mexico gets more rain than the USA or Canada, the availability of water per person in Mexico is only one-twelfth that of Canada and about half that of the USA because Mexico’s population density is far higher. In other words, though each square kilometer in Mexico receives more rain on average, that rain must be divided among more people. Of 177 countries analyzed by the FAO, Mexico ranked 90th in terms of water availability per person. However, if Mexico is divided into two zones, the south would rank 51st and the north would rank 131st.

Mexico’s per person consumption of water is about half that of Canada but with proportionately more allocated to agriculture. Nationally, about 75% of water consumption is used in agriculture while settlements and industry use about 17% and 8% respectively.

Mexico’s groundwater aquifers are a very important resource. About 64% of public water supplies come from wells sunk into aquifers. Mexico City and Monterrey and several other metropolitan areas rely heavily on aquifers. Aquifers also provide about a third of all the water for agriculture and livestock. According to the National Water Commission, 104 of the country’s 653 identified aquifers are over-exploited in that more water is withdrawn each year than is naturally replaced. Nearly 60% of the total groundwater extracted is withdrawn from overexploited aquifers. Total water extraction exceeds recharge in Mexico City, Monterrey, and other large northern metropolitan areas as well as irrigated areas of Sonora, the central northern plateau, the Lerma Basin and Baja California.

Mexico City, which 500 years ago was a city of marvelous canals, currently has a serious water problem. More than 60% of its water comes from the exploitation of deep wells sunk into its subterranean aquifers. Rainfall is only able to recharge about 1/3rd of the water extracted each year. Thus, the aquifers are losing water rapidly and receding farther and farther from ground level. This “mining of water” from the aquifer has resulted in severe subsidence problems in Mexico City. The wells must be sunk deeper every year and more energy must be used to pump the needed water to the surface.

For more information about Geo-Mexico: the geography and dynamics of modern Mexico, please visit geo-mexico.com 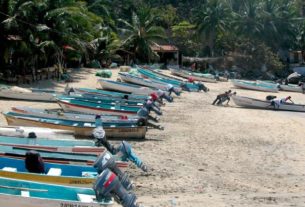 Sotol: another drink from the New World’s oldest wine producing region in Mexico