Marketing to the Hispanic Market (Part 1 of 2)

The U.S. Hispanic population, with its growing purchasing power and impressive growth in media usage, has companies scrambling for ideas and ways to effectively target this barely tapped market. According to TNS Media Intelligence, marketers invested 10.5% more in America’s largest minority in 2005 than they did in 2004. In the U.S. market overall, marketers invested a mere 3.4 percent more from 2004 to 2005.

In 2002, the U.S. Hispanic population officially became the largest minority in the United States, and it will continue in this position through at least 2050. Synovate reported in 2004 that more than 43.5 million U.S. Hispanics make up almost 15 percent of the U.S. population—a percentage growing 5 times faster than the general population, which is more than a 70% increase in the last 10 years. By the year 2020, which is only 14 short years away, 1 out of 5 Americans will be of Hispanic origin. This source also tells us that net natural growth of the Hispanic population (births minus deaths) surpassed immigration as the main source of population growth in 2004. This means that each year over 1 million children will be born to Hispanic mothers. Have you ever wondered where they will go to school and grow up learning? Better yet, how companies are marketing to them?

This report from Marketingprofs.com and iHispanic Marketing Group will present what other professionals are doing effectively to target this market, as well as what limitations should be considered or perhaps what your competitor’s weaknesses may be, in which case you can gain an edge in winning market share if you take appropriate action. You will receive hard-to-find data about trends, targeting segmentation, marketing tactics, and the most common limitations of those who have not yet been able to do any, or have done little, marketing to the Hispanic population.

MarketingProfs.com and iHispanic Marketing Group partnered to research key facts on the Hispanic market via a study conducted with 1026 respondents.

First, it’s important to point out that 59% of all respondents said their organization does or plans to design marketing efforts specifically for Hispanics; that number increases to 64% when considering respondents with headquarters in the United States. That is, the other 41% or 36%, respectively, may reach Hispanics but do not have specific marketing programs designed to attract this market.

We also know we have a very accurate scope of the market because it’s well represented among all sizes of companies:

What size is your organization in annual revenue?

The types of business focus are as follows:

Even though the opportunity is great, not all companies today are doing something to design marketing efforts specifically for Hispanics. Only 36% of respondents said they are already doing something about it, and that proportion reached 40% when segmenting those just in the U.S. At the same time, 23% across the board said they have not done so yet but have plans to. Therefore, we can consider that roughly two of three professionals are aware of its importance and need to do something about it.

Just as with any population that needs to be targeted in more detail, segmenting the Hispanic market is a useful approach. Some 49% of respondents said the market can be divided into various segments, depending on the interests of the marketing professional. However, 33% of respondents said they are likely to use a “One size fits all approach,” and 6% said they would follow the advice of their advertising agency. This study will also cover some of those preferences.

In today’s competitive market, it is not enough to say, “We are going to target the Hispanic market.” A more analytical approach is needed. The Hispanic market includes new immigrants and a sizable number of even third-generation Americans; Spanish-dominant Hispanics and those who speak only English; Mexicans (67%), Puerto Ricans (9%), Cubans (4%) — 22 different countries of origin with different values, customs, behaviors, attitudes, and potentially preconceived notions of various brands.

The reasons that marketers segment consumers may vary, but mostly segmentation helps in identifying who will be a good target for a specific marketing initiative and helps marketers position their product or service in a way that makes sense to the target consumer. These charts show how respondents segment the Hispanic market.

The following chart explains which language is most commonly used by companies for Internet marketing programs targeting Hispanics. It does not demonstrate what should or shouldn’t be done.

The typical bilingual Hispanic’s intentions may be triggered by a word in their thought process that may be either in English or in Spanish. Therefore, these bilingual users will often use both languages to get what they want or need at any place that may be part of the consumer’s daily life, whether that’s at a grocery store, gas station, mall or search engine. Companies will never be able to control that thought process; they can, however, make relevant advertisements in both languages to attract all users and not just a specific segment of the market. The more options that marketers use, the greater the opportunity that they will win over a diverse market. Otherwise, they might be leaving potential transactions to their competitors by taking a single piece of the pie, rather than the entire pie.

Only 17% of all respondents said they have Spanish marketing programs specifically to target Hispanics; that correlates highly with the finding that only 16% have separate Spanish Web sites for Hispanics. These are key figures, because when asked about what they thought were “the biggest barriers to targeting the Hispanic market,” they answered as follows:

There is no doubt that translation is a cost. Perhaps, however, companies would be better served to think of creating a Spanish-language Web site, for example, as an asset rather than an expense. For 20-plus years, the Hispanic market has shown growth in both market size and purchasing power. Companies can no longer ignore the cost of not doing business with 44 million Hispanics.

True, there are many challenges in Hispanic marketing today, and the biggest one, perhaps, is the language barrier — between the various dialects of Spanish. For example, consider the following picture.

When Hispanics look at this object, they could be thinking of any of the following: cómétá, bárrílété, pápálóté, pápágáyó, mílánó. Which one is the correct one to use? It’s each company’s job to figure that out… rather than back off from what is likely a significant opportunity.

Ignacio Hernandez, Jr. – “Nacho” Hernandez – is founder and CEO of the iHispanic Marketing Group ( www.ihispanic.com). he has been involved with international business, e-commerce, and marketing since 1996 and has been targeting the U.S. online Hispanic market since 2000. 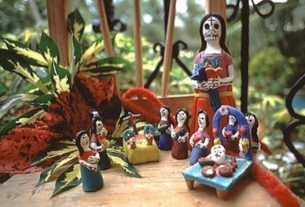 Comparing cultural differences: Mexico with Canada and the United States