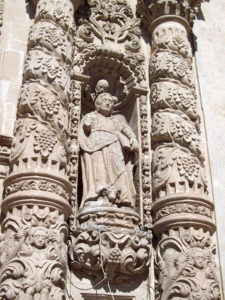 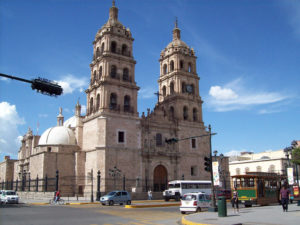 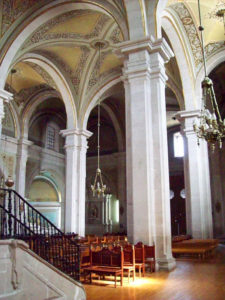 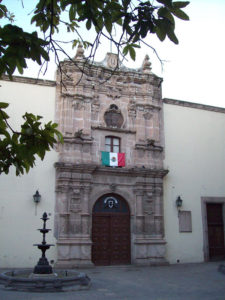 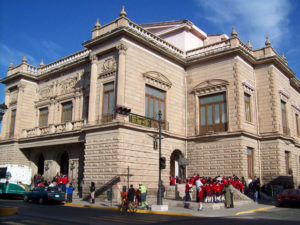 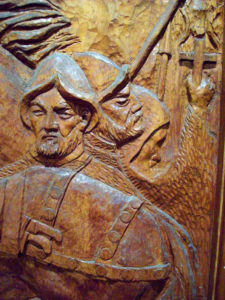 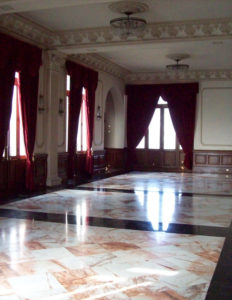 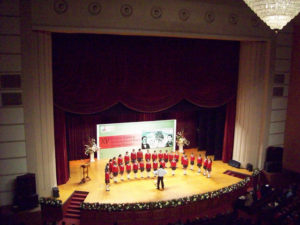 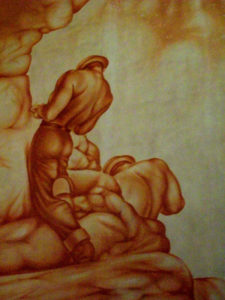 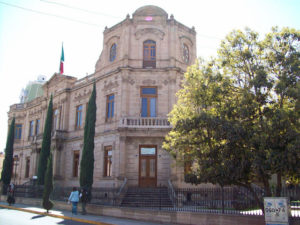 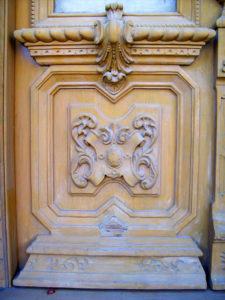 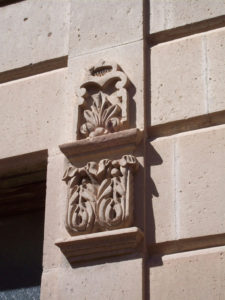 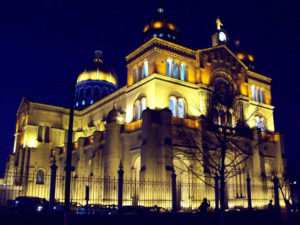 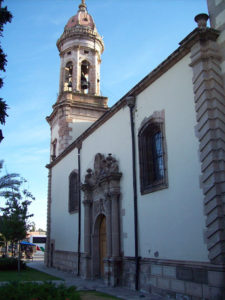 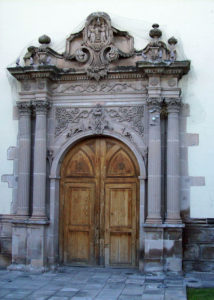 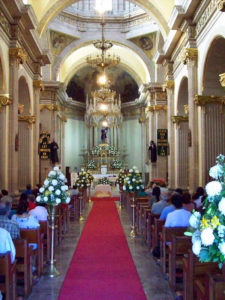 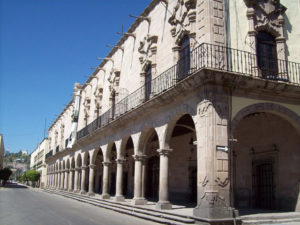 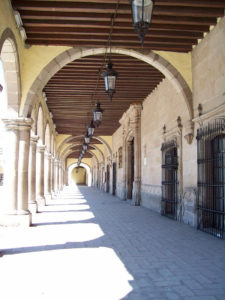 La Catedral Basílica Menor has symbolized colonized Durango longer than any other historic Durangan landmark. The Lesser Basilica Cathedral, better known, simply, as La Catedral is located on Calle 20 de Noviembre in front of the Plaza de Armas (Arms Plaza), between the streets, Juárez and Constitución in the very center of Durango’s historic downtown area. It originally materialized as La Antigua Parroquia de la Asunción —The Ancient Parish of the Assumption — named in honor of the Christian belief that the Virgin Mary was transported to heaven with her body and soul united. The parish earned the title of “cathedral” around 1620, when it quartered the Bishop of Durango, but a fire destroyed it. The church was once again built, and once again destroyed when problems with dampness plagued the building.

In 1695, Bishop García Legazpi ordered the initiation of a new project, designed by Architect, Mateo Nuñez. About a decade and a half later, the principal structure that today towers over of the Plaza de Armas was finished. In 1840, Bishop Zubiría ordered major remodeling of the building but conserved its extreme baroque style.

Visitors can enjoy the Cathedral both at night and during the day. Natural daylight favors observation of the interior’s stained glass windows and painted domes, and the exterior is splendidly illuminated at night. One may also observe the cathedral as a prominent landmark on the Durangan landscape from the Cerro de los Remedios.

In addition, the cathedral hosts the legendary shadow of “the nun” (la monja) who eternally awaits the return of her love. One may see the shadow of the nun from sidewalk on Constitución street.

Many of northern Mexico’s historic intellects, politicians, and clergy were educated within the classrooms of today’s Administration Building of the Juarez University of the State of Durango. During much of the 20th century, it housed one of the most important educational entities in northern New Spain’s New Vizcaya Province, approximately equivalent to what are, today, Chihuahua and Durango.

The building’s main access, located on Calle Constitución between the streets 5 de Febrero and Pino Suárez, is nestled in a quarry stone patio alongside the Temple of Our Lady of San Juan de los Lagos (Templo de Nuestra Señora de San Juan de los Lagos), which shares a long history with the present university building. A sketch of its detailed façade appears to date on university letterheads and logos.

In 1856, Don José de la Bárcena founded the Civil College of the State (Colegio Civil del Estado), which moved into the building in 1860. Following the death of Benito Juárez, the Governor, responding to a request from students and teachers of the college, renamed it Instituto Juárez (Juarez Institute). With its incorporation into the University of Mexico (Universidad de México) in 1938, it adopted the slogan “Por mi raza hablará el espíritu,” a modified version of a phrase authored by Don José Vasconcelos. In the original phrase, Vasconcelos referred to the voice of the spirit that emanates from one’s roots, an important concept in Mexico’s mestizo culture.

Elevated in 1957 to the status of university, he institute received its present name — Universidad Juárez del Estado de Durango, and the building, to date, serves as the university’s principal administrative center. The main structure centers around a palm-shaded garden. Some of the interior spaces such as the President’s conference room and the Laureano Roncal auditorium are furnished with pompous, carved wood furniture.

One of Durango’s most beautifully decorated colonial buildings is the House of the Count of the Suchil Valley, location today’s Banamex Bank, on the corner of Calle 5 de Febrero and Francisco I. Madero. It was originally a home owned by wealthy miner and landowner Joseph del Campo Soberón y Larrea, Count of the Valley of Súchil. In 1763 and 1764, Pedro de Huertas designed its beautifully sculpted baroque fascia and interior. Sculptures include intricate vegetation, shells, ribbons, flowers, fruits, and an image of Saint Joseph and the Christ child. Arches in the interior patio and decorated pillars surround the bank’s main floor, where clients now wait to carry out bank transactions.

At the end of the 19th century, the Compañía Constructora y Explotadora del Teatro de Durango was formed with the objective of constructing a playhouse. The company lived until the beginning of the 20th century, when the first stone was laid and thereafter dissolved, leaving the building in the hands of the state government. The building fell into the private sector and became a movie theater, known as the Cine Principal.

Grandeur marks the neoclassic theater’s entrance, with massive stairs leading up to arched entranceways and, eventually, to crystal-windowed wood doors guarded by iron gargoyles. A statue of the theater’s namesake, Mexican concert pianist and the last romantic composer of the Porfirio Díaz era, stands on the corner of the Avenue 20 de Noviembre and Bruno Martínez Street. Above the entranceway, generously sculptured arches framing wood and crystal doors overlook the avenue.

In 1991, the theater was donated by the President of the Mexican Republic as patrimony of the Durangan people, and has since hosted cultural events for large Durango audiences.

Some may consider the Victoria Theater a bit modest to be considered among Durango’s top architectural gems, but its quaint, simple elegance and relatively small, tiered seating make it a cozy setting for medium-sized theatrical, musical, and other cultural events. It really deserves a visit.

Located next to the Governor’s Palace on Calle Bruno Martínez, the theater was originally called the Zambrano Coliseum and Theater (Coliseo y Teatro de Zambrano). Juan José Zambrano, a wealthy miner, alderman, and mayor in Durango, ordered the construction of the theater as an addition to the Governor’s Palace, for his personal use. The building was inaugurated in 1800 and rebuilt or remodeled between 1909 and 1910 in celebration of the 100th anniversary of national Independence, hence, its new name, Teatro Victoria, to honor Guadalupe Victoria, Mexico’s first president. In 1980, it was again remodeled by order of Dr. Héctor Mayagoitia, the state’s Governor, at the time, with the goal of promoting the development of the arts in the state.

The building’s facade is modestly colonial, as is the tastefully designed reception area. The theater’s attractiveness lies within. A horseshoe of several tears of balconies, each directly above the previous, surrounds main floor seating, and nearly all of the seats provide a right-up-close look at performing artists. Wooden banisters and lots of textiles make the theater acoustically comfortable, and low, but adequate lighting provides a marvelous setting for one to contemplate more than a century of cultural events as one awaits the third call. Visitors to the City of Durango should definitely check the theater’s schedule to see if there’s an interesting event there while in Durango.

Locals know the Regional Museum of Durango on the corner of streets, Victoria and Aquiles Serdán as “El Aguacate,” (The Avocado), in reference to a tree in the museum’s garden. Built during the second half of the 19th century, it was home of Francisco Gómez Palacio, ex-governor of the state. The structure has served as a pay station for revolutionary troops, the civil register court, the municipal president’s office, the headquarters of the Supreme Court of Justice, as a schoolhouse and as a public library. The museum opened as part of the Universidad Juárez del Estado de Durango (see above) in 1989, and it displays important elements of the state’s history.

Stanislao Sloneck designed the building to reflect French influence and constructive style, which were popular at the time of its construction. Like many buildings of the period, it is built principally of quarry stone. However, the interior is pleasantly decorated with wood finish, giving it warmth uncommon in many of the region’s colonial structures.

Born as a simple prayer area, the Saint Augustine Temple, along with its plaza, has grown into one of Durango’s most visually pleasing architectural gems. Its construction began in the beginning of the 17th century with its foundation by Fray Gonzalo de Hermosillo. Its initial construction took nearly a decade and a half, and remodeling and additions were still in process during the 19th century when master mason Benigno Montoya added a Neogothic façade, including simple decorations on the columns and religious figures.

Juan José Zambrano (see above) ordered the construction of the Governor’s Palace at the end of the 18th century. It is located on Calle 5 de Febrero in front of the Plaza Cuarto Centenario, between Bruno Martínez and Zaragosa streets. The building was occupied by the governor once Mexican Independence was established, and it is the site of today’s state governor’s offices.

The two-story structure is of quarry stone and the entrance way and interior are adorned by arches on stone columns. In the building’s interior, one finds mural paintings of historic events in Durango history painted by Francisco Montoya de la Cruz (1950) and Ernesto Flores Esquivel (1981). The upper story features a balcony from which the state governor participates, each year, in the Shout for Independence celebration. President Benito Juárez resided in the Governor’s Palace upon his return from the Paso del Norte (the Northern Pass, which is today’s Ciudad Juárez, Chihuahua). Juárez is commemorated by a sculpture within the building, as well as by a large sculpture in the plaza in front of the palace.

Built in the 19th century and containing remnants of construction dating back to the 18th Century, the Casa de Gobierno currently houses state executive offices. It was home to governors at one time. It is located on Calle Bruno Martínez between Coronado and Aquiles Serdán. The building features attractive quarry stone and abundant hallways among gardens. Aside from its function as an office building, it hosts numerous meetings and events in its conference room.

Located on 20 de Noviembre Avenue and Victoria Street, the Municipal Palace is a neoclassical style building built in 1898 as the private residence of Pedro Escárzaga, a wealthy Durangan miner. Inside, a mural by Francisco Montoya de la Cruz depicts historic moments in Durango’s history, including the conquest of Nueva Vizcaya, discovery of the Market Hill (Cerro del Mercado), the Revolution, and the Independence movement. The building has served as the Durango Town Hall (Ayuntamiento de Durango) since 1930.

On Octubre 16, 1892, the first train arrived at the Durango Train Station, located on Felipe Pescador Avenue at the head of Calle Bruno Martínez. Architect Manuel Ortiz Monasterio built the station in 1920, but one of the structures in the train yard dates back to 1893. Outside the station, Durango’s last steam engine, number 900, has been conserved, and gardens in front of the station make it an attractive site for visitors.

I have mentioned only a portion of Durango’s interesting and important colonial treasures. Architecture fans can see many more colonial gems just by strolling the streets in Durango’s historic downtown area. In addition, many of the downtown buildings have been recently remodeled or restored to colonial style, and much of the downtown area has restored quarry stone sidewalks. The municipality has also invested in ground-level and structural illumination that make many of the landmark buildings outstanding sights in the evening.

More information on colonial buildings in Durango and other tourist attractions is available in Spanish, within web pages from Mexico Desconocido (https://www.mexicodesconocido.com.mx/notas/7908-Durango,-Durango), the Instituto Nacional de Información Estadística y Geográfica (https://mapserver.inegi.gob.mx/geografia/espanol/estados/dgo/dgo-it.cfm?c=590&e=10&CFID=2610500&CFTOKEN=49566404#arqrel), and in the Municipality of Durango’s photo gallery (https://www.unidosporti.gob.mx/galeria).