Two things the three señoras had in common were poverty and pain. Even their names, Dolores, meaning pains, seemed to cast a grim prognostication on their lives. Their informal names of Lola did nothing to lighten their load. Lola #1 was not a local village person. A shabby pickup dumped her and her dissimilar brood of five one day on the outskirts of the village, as if they were unwanted dogs or cats. The driver tossed their cartons and bundles on the ground and took off in a cloud of dust. “Good riddance to that one,” said the driver’s wife, sitting next to him. The driver looked downcast, however, and he didn’t say a word. And so it was that Lola, with her full, pouting mouth and fat, stocky figure, got thrown out of the end-of-the road village that butted right up to the mountain where she was born.

They settled into an eroded adobe ruin that was destined to be knocked down but sheltered them well enough for the time being, since it was the dry season. The oldest boy hired out doing field work, the two older girls went to work as mothers’ helpers, and Lola soon began again practicing the world’s oldest profession, which was the reason for her relocation.

It must be said that she was neat. Faithfully she swept her part of the street. She pummeled their worn and tattered clothes on a volcanic rock in the lake until they were sheer, with no knap. Then she draped them over bushes and rocks to dry in the sun. Her black lacy underpants, spread flat on a stone, brought smiles to rancheros who watered their cattle in the lake.

Local resentment mounted slowly among villagers, mostly women and old men not able to enjoy Lola’s skills. One day, as Lola lay at the edge of a field on a petate mat with a man, someone silently put an irrigation hose through the sheltering wall near them, turned on the water, and stepped back to enjoy the results. Looking like drowning cats, sputtering and fuming, they rose and took off in opposite directions.

There was however, a woman with ten children, who was pleased with Lola’s presence in the village because it allowed her more rest at night.

Lola’s technique to garner clients was to stand motionless, looking like a sullen Olmec statue, near an arroyo highway underpass. There, arrangements between Lola and her client were made and each would temporarily go a separate way. When Lola began having fainting spells, her presence at the underpass was less predictable, and she was missed by the men.

One hot afternoon, Lola was found dead on the earthen floor of her hovel. There were no tears. She had endeared herself to no one, not even the men. Her chubby frame was pressed into a tight pine box. Her daughters begged flowers from neighbors who came later and, by rote, recited the rosary. Her son dug the grave. Lola was gone. The youngest children were taken in by kindly folks. The older of the remaining girls completed the circle and took up her mother’s profession.

Lola #2 was a different sort. Unmarried, she had no help and supported herself by cooking and cleaning for other folks. She always regretted that her only son had no schooling. At age six, she sent him out to work in the fields, to contribute a pittance toward their welfare. Now he was gone to the United States, to seek a better life. With bright, believing eyes, she would tell neighbors of his promise to send for her when he got settled in the land of plenty, that they would have a new and wonderful life. But the people, their hearts long hardened to such claims, just sniffed. Much time passed with no word. Desolation darkened Lola’s dream. The memory of her son hailing a bus to go north began to dim.

One day, at a rodeo, she arrived in the bleachers drinking from a bottle of cheap tequila. The band blared, the sun burned down, youths taunted, people pointed and whispered. She clutched the bottle, her only ally.

But Lola retrieved her reputation by doing a manda, a public penance. When the Virgin of Zapopan came to the village there was a grand procession, with Indians in full, radiant regalia, feathers and standards waving. They danced with clogs and rattles on their feet to the rhythm set by drums and fiddle. And there, in the midst of them, was Lola, looking drab and downcast by comparison, but stamping and whirling up a storm, guided by strong resolution. Perspiration dripped from her brow. Her feet, accustomed to huaraches, were bloody.

That she redeemed herself, there was no doubt, but she also must have received a powerful blessing from the Virgin. A few days later, her son came walking into the village. He had been working in construction in California and came to take his mother to their new and wonderful home.

Lola #3 was a good daughter and followed her mother’s advice. “Bear your cross, my daughter,” the old lady said, when Lola sought her consolation. “Do you remember what a womanizer and abuser your father used to be? All things will change with time. Just be content that he supports you.” She patted Lola’s hand. “Be proud that he is a farrier, at least his father taught him something besides field work.” Childhood memories of hunger and drunken fights made Lola shiver.

For her wifely dedication, Lola received only bruises and hard words. Her joy came from the great circle of love she shared with her eight children. When she lay obediently with her macho husband, she was only there physically. Her mind was on another plane, dreaming of release from his tyranny and a gentle life for her children, who were her only source of comfort.

Outside their adobe home, she held her head high and didn’t attempt to explain her bruises. Her children were especially bright, all of them. Helped by relatives, all the sons, as they grew into their teens, escaped to a better life in the U.S. Frustrated by not having his sons’ strong backs to help him in the fields anymore, her husband one day had a terrible, tragic tantrum. He pulled Lola’s thick braid as she was seated in a straight chair, bent her head back, and something snapped in her neck. The girls ran out calling for help. The Red Cross came. The father was temporarily jailed. Lola’s sons flew immediately to their mother’s side, hastily made arrangements and spirited the whole family to the States, never again to see their father.

The rest is like a fairy tale of success, the children going on to higher education. Lola’s neck pain is gone. She takes night classes in English and is as dedicated as ever to the welfare of her family. 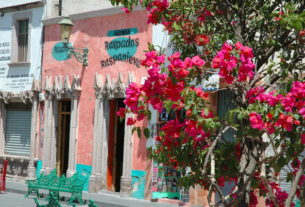