This dish is usually associated with festive occasions in Mexico. I have had it at weddings and New Year’s celebrations, but it would be fine for any special dinner such as a birthday. Most butchers will butterfly a loin for stuffing if requested.

Open the butterflied loin like a book; salt and pepper both sides.

In a small bowl, mix the raisins and sherry and allow the raisins to absorb the sherry while the stuffing is being prepared.

In a medium saucepan, heat the butter and corn oil, add the onion and garlic and sauté until the onion is soft. Add the apricots, prunes and almonds, stirring to combine ingredients. Add the raisin and sherry mixture, the spices and the almonds, stirring again to combine. Add salt and pepper to taste. Remove stuffing mixture from heat.

Spread the stuffing mixture over the inside of the pork loin, roll up like a jelly roll, and tie at intervals with kitchen twine. Preheat the oven to 350º.

In a large, heavy-bottomed skillet heat the oil and brown the roast on all sides. Place it in a roasting pan and roast for 1- 1 ½ hours. (Using an instant-read thermometer to check for doneness is recommended.) Remove from oven; cover the roast with aluminum foil and let sit for 10 minutes before slicing. In Mexico, this dish is generally served with pure de papas, very smooth whipped potatoes. 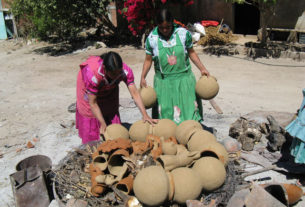 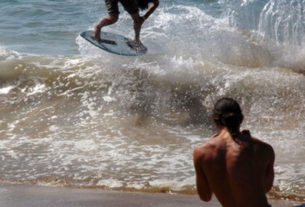