If Diogenes, wielding his famous lamp, ever came into a gallery of Mexican presidents, he wouldn’t come away completely empty-handed. In his quest for an honest man, he would snare at least two for his collection: Benito Juárez and Lázaro Cárdenas. Since Juárez is the subject of another profile in this series, the focus here will be on the president who nationalized Mexico’s oil industry and whose term in office partially paralleled that of Franklin D. Roosevelt.

Cárdenas was known not only for his honesty but for his radicalism as well. Before his death in 1970, his support for Fidel Castro caused him considerable unpopularity not only among conservatives but also among civil libertarians who resented the Cuban dictator’s harsh treatment of political dissenters. Regrettably, this late-life lapse in judgment helped cloud memory of many praiseworthy actions that marked Cárdenas’s early career and years in power.

Lázaro Cárdenas del Rio was born in Jiquilpan, Michoacán, on May 21, 1895. Of lower middle-class background, he became head of the family at sixteen when his father died and he had to support a widowed mother and seven younger siblings. Though he only had six years of formal education, he became a printer’s devil when his father died and all his life had the greatest respect for education and the printed word.

Though Cárdenas disliked militarism and always described himself as a teacher or farmer, he nonetheless had a long and distinguished military career. In 1913, after Victoriano Huerta connived at the deposition and death of Francisco Madero, he joined the staff of General Guillermo García Aragón, one of the military leaders fighting to oust Huerta. García’s forces were defeated in their first engagement and Cárdenas was forced to go into hiding.

But the young revolutionary seemed to have an almost tactile instinct for ending up on the winning side. In 1915, by now a lieutenant colonel, he joined the forces of another future president, General Plutarco Elias Calles. By then Huerta was in exile and Alvaro Obregón and Venustiano Carranza were fighting their former ally Pancho Villa. Carranza became president but set up a corrupt government-by-crony. In 1920 Calles joined Obregón in a successful rising against Carranza. Obregón became president, Calles his heir apparent, and Cárdenas was named a general at the tender age of 25.

It should not be assumed that Cárdenas’s rapid rise in the military was due solely to his being a protégé of Calles. On his rise to the top, he campaigned against Zapata, helped put down the anti-Obregón revolt of Adolfo de la Huerta, and led forces against the Catholic cristero rebels and an anti-Calles military junta led by General José Gonzalo Escobar.

But Cárdenas always preferred to be known for civil rather than military achievements. In 1928 he became governor of Michoacán. Where his military career had been one performed from a sense of duty, his career as civil governor was a labor of love. He built schools and roads, developed irrigation projects, and mustered peasant farmers, laborers and students in a united front group to advance social progress.

A man who could not be bought, Cárdenas was famous for his rigid honesty. In 1920, while serving as a military commander in the oil-rich Huasteca country, Cárdenas contemptuously rejected offers of bribes, including a new car, from representatives of foreign oil companies then operating in the area. These attempts to corrupt him could well have influenced his decision, while serving as president, to nationalize Mexico’s oil deposits.

Cárdenas’s inflexible integrity did much to pave his way to the presidency. His old patron, Calles, though no longer president, continued to rule Mexico through a series of puppets — Emilio Portes Gil, Abelardo Rodríguez, Pascual Ortiz Rubio. But resentment grew so strong that Calles decided to select a president among the honest idealists in the party. The logical choice was Cárdenas, a man Calles severely underestimated. “All he is, he owes to me,” he declared smugly. In 1934, at age 39, Cárdenas became one of Mexico’s youngest presidents.

Calles paid dearly for his overconfidence. When he believed Cárdenas was being too lenient toward striking workers, he began seeking ways to remove him. Cárdenas hit back in dramatic fashion. On April 9, 1936, he ordered that Calles and twenty of his top henchmen be rounded up and deported to the United States. Such was the popularity of this honest president that throughout Mexico — as the saying goes — there wasn’t a wet eye in the house. With public opinion solidly behind him, Cárdenas was now free to make his contribution to history by reclaiming Mexico’s oil.

On March 18, 1938, Mexico expropriated the assets of seventeen foreign oil companies that had been doing business in the country. Though the announcement caused wild cheering from an overflow crowd in the zócalo, economic consequences were severe. Several nations imposed a boycott on Mexican oil and Josephus Daniels, the sympathetic U.S. ambassador, wrote that “out of resentment for the expropriation … markets for Mexican oil in the United States and Britain suddenly dried up. Without markets the Mexicans would be drowned in their own oil, and the expropriation would fail.” It was World War II that saved Mexico’s oil industry. As oil became increasingly scarce, the United States and Britain lifted the boycott and began to greedily consume Mexico’s “black gold.” In 1942 a reparations agreement was reached under which Mexico agreed to a settlement which brought its debt to a staggering (for those days) figure of $130,339,000.00

As noted earlier, Cárdenas was known for radicalism as well as for honesty. In December 1933 Mexico’s ruling party held a convention at Querétaro. (This long-lived entity, today known as PRI, was then called the National Revolutionary Party — PNR.) In addition to naming Cárdenas as its candidate, the PNR announced a Six Year Plan of political and social reform. While some PNR politicians may have thought of the Plan as window dressing, Cárdenas took it seriously and did all he could to implement its provisions during his sexenio — six-year term. The Plan’s principal features called for 1) restoration of the system of ejidos (common lands) through a strong agrarian program to combat the domination of the large haciendas; 2) modern secular schools that would teach rationalist doctrines and combat the “fanaticism” of the Church; 3) workers’ cooperatives to oppose the excesses of industrial capitalism.

The new president’s personal style also reflected his radicalism and honesty. He refused to live in Chapultepec Castle. He cut his salary in half. He was inaugurated in a business suit instead of in a military uniform. When a bust of him and fifty replicas were cast in bronze by a sculptor, Cárdenas made them disappear. At the National Palace, he received barefoot country people while politicos, generals and businessmen were made to cool their heels.

While Cárdenas didn’t exactly die in poverty, he was hardly a poster boy for some “lifestyles of the rich and famous” program. When he began remodeling his modest country house near Lake Pátzcuaro, reporters predicted that he was expanding it into a palace. Cárdenas explained that the enlarged area would be a free clinic for Indians of the region. Later, he donated the house to UNESCO for use as a teacher training center.

If there is an incident that serves as a paradigm for the life and career of Lázaro Cárdenas, it is this one. Ambitious men in Mexico traditionally pursue military a/o political careers as a means of enrichment. In 1932, Cárdenas had been a general, a cabinet minister and a state governor. Appointed to command the military zone of Puebla, he had to borrow money to move his household goods to the area. 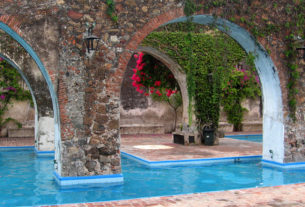 Play to Your Heart’s Content at the Ex-Hacienda de Temixco in Morelos Part Two: A Long and Varied History

The difference between “te amo” and “te quiero”