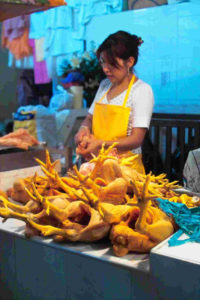 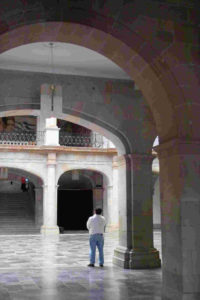 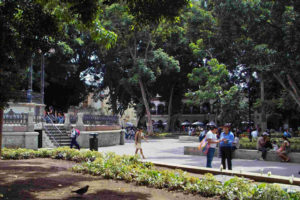 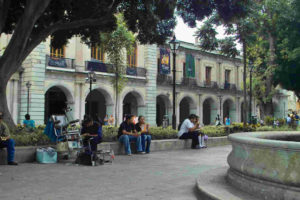 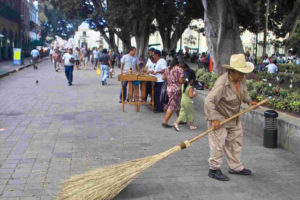 In college I fantasized about a junior year in Paris and, even after having children, I concocted schemes to move us all overseas. Only after the children left home, however, did I finally seize the day and talk my husband and myself into a “senior” year abroad. My husband took early retirement, and I left my teaching job. We sublet our Brooklyn, NY, apartment. Just as we were about to set out for the southern Mexican city of Oaxaca, known for its idyllic climate and rich indigenous culture, unrest broke out. Oaxacan teachers routed the local police who had violently shut down a sit-in. Widespread demonstrations calling for the removal of the governor of Oaxaca state followed. Family and friends urged us to pick another destination. Assured of our safety by local contacts, however, we proceeded as planned.

The rebellion, alternately inspiring and dispiriting, proved to be just the first of many surprises we encountered in Oaxaca. As we studied (Spanish, salsa, guitar), found pursuits (squash for my husband, volunteer tutoring for me) and made great Mexican and expatriate friends, many of our assumptions were challenged. Our year abroad altered our perspective on both Mexican and American lifestyle and priorities.

1. “Mexico is a dangerous place,” Americans and Canadians assume. Certainly some sections are plagued by drug-related crime. Other areas, however, including Oaxaca City, are safe. Even during the six-month attempt to unseat the governor, while all North American mainstream media depicted Oaxaca as wracked by violence, my husband and I found that only those on the barricades were in danger. Indeed, what impressed us – who vividly recalled the NYC blackout of 1977 – was how peaceable and civilized Oaxaca remained without an active police force. Not only was there no looting, but Oaxacan drivers handled months of traffic blockades by turning one-way streets into two, figuring out alternate routes, waiting. After the rebellion ended, people of all ages resumed their practice of strolling through their tranquil city at night to enjoy music, dance, outdoor food, and each other.

2. “Quien apurado vive, apurado muere.” “Live in a hurry, die in a hurry.” I knew, as this Latin saying suggests, that Mexicans were more laid back than their northern neighbors. But how this manifested itself surprised me. With tourism depressed, my husband and I were at times the only students in our Spanish language school. After class we often hung out with our teachers. At first I would stand up after an hour of conversation, feeling guilty, as I would in New York, for imposing. Gradually, though, I realized, that Luz, the school’s elegant, middle-aged director, and modish, twenty-five-year-old Luis could talk on or join us for comida (the big afternoon meal) because they weren’t rushing off somewhere. Unlike New Yorkers, always squeezing in and cutting short social engagements, Oaxacans don’t live by an agenda. Indeed, making a plan with spontaneous Oaxacans has its risks. Not for nothing were we taught the idiom, “No me dejes plantado,” (Don’t leave me high and dry) in our second week of class.

3. “But don’t they need the money?” We were having a drink with Luz and Luis in Oaxaca’s beautiful zócalo, (central plaza) when a wedding procession, preceded by dancing monos (oversized papier-mâché figures with people inside), passed by. Scattered applause broke out. My husband and I followed suit, but our friends held back. “Extranjeros,” (foreigners) said Luz, shaking her chandelier earrings, disapprovingly. “Del D.F. (from Mexico City),” seconded Luis, nodding without loosening a hair in his spiky coif. Looking closer I could see that the wedding party was too tall and pale to be Oaxacan. Luz and Luis went on to explain how demeaning, even violating, it felt to have their gorgeous presidential palace, where the party was headed for the reception, rented out to the highest bidder. The palace had been the active seat of state government until the current hated governor moved out of citizens’ reach. “But don’t they need the money?” New York friends responded to this tale. Indeed, especially with tourism depressed, Oaxacans desperately needed income. Yet, contrary to what Americans might expect, many placed a higher value on preserving their patrimony.

4.“La refrigeración echa a perder el sabor.” Convinced that refrigeration ruins flavor, Oaxacans urged us to spurn packaged supermarket chickens in favor of those in local markets. Once we learned to slow cook these leaner birds, we were hooked and never suffered ill effects. This was just one example of Oaxacan disregard for the U.S. value, “Safety first.” Leo, our homestay hostess, clutched her chest as she described how pained she’d felt when her Americanized son and daughter-in-law placed their newborn in a car seat on the way home from the hospital. Depriving a crying infant of a reassuring embrace even for an hour seemed like needless cruelty to Leo. In Oaxaca, quality of life of life seems to trump safety.

5. “I need some space.” That this American credo violates core Mexican values is captured in the  movie Spanglish when the immigrant mother chastises her Americanized daughter, “No espace between us.” Mexicans put less emphasis on independence. Our hosts Hector and Leo communicate with their adult children daily. Women selling handicrafts in markets keep their children safe and content by wearing them tied in rebozos all day as they work. My husband and I had our own experience of Mexican togetherness. In the six months of our homestay, we were together virtually every minute – in our room, at family meals, walking to and from school. Surprising this proved quite romantic. Our confined quarters made our moods more harmonious and heightened passion. When we rented a two-story house, though, we slid back into doing our own thing for much of the day.

6.“Sin tradiciones, ¿qué tenemos?” “Without our traditions, what do we have?” was not a question I expected from a young person. But it was put to me by Fermin, an earnest campesino who was in the capital to study political science. He had decided to miss an exam to return to his pueblo for its Saint’s Day celebration, more important in pueblos than birthdays. Like other Oaxacan festivities, such celebrations fuse Catholic and pre-Hispanic customs. They require elaborate preparations and take place over three or more days. After participating in one segment, the calenda, I was even more surprised. How many young Americans would bother with a slow all-night procession with stops every few yards for repetitive music and refreshments? Other conversations underlined the dominance of tradition, notably hearing from Luis that “good” Oaxacan girls (including his chic girlfriend up on the latest American movie) still don’t have sex before marriage. Gradually I came to appreciate that even for Oaxaca’s youth, festivities are not so much about fun, nor marriage about sexual compatibility. Rather they are about preserving meaning, continuity and community through traditions practiced as they have always been.

7. Por todo mal mezcal. Por todo bien tambien. “For anything bad, have a mezcal, [a distilled spirit, produced in Oaxaca from agave plants], and for everything good, do the same.” In the balmy Oaxacan climate, expatriates (mostly Americans and Canadians), too, grew more available and spontaneous. They invited us over on first meeting and let conversations extend for hours. Sometimes alcohol fueled the talk. At other get-togethers, a board or bridge game anchored it. Freed of time constraints, we were more inclined to reveal ourselves and tackle substantive issues – including why such gratifying social connections, which we had all longed for at home, happened more readily in Mexico. Perhaps it was just that so many of us were retired or self-employed, but it felt as though something in the ambience opened us up to the moment and to each other.

8. “Mas vale tarde que nunca” “Better late than never” is an idiom in both Spanish and English. Extended time abroad is life-altering at any age. With language schools and expatriate associations (like Oaxaca’s lending library) to help locate lodging, volunteer work, and friends, it can also prove easier than you might expect. And more economical, especially if you choose a second or third world country. As you come to see that culture and your own newly, how you define and value basic concepts like violence/safety, poverty/richness, tradition/innovation may become more nuanced. Change can also open up new sides of relationships and yourself. You will form bonds to a place where you might eventually want to retire. Ironically, the hardest part can be returning home and figuring out what to do next. 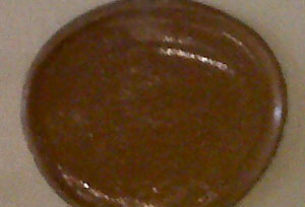 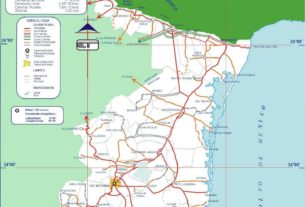