Possibly no other country in the world has as many festivals, fairs and feast days as Mexico. National holidays, religious holidays and people’s santos (saints’ days) are all celebrated with gusto, as are the observances of the patron saints of virtually every city, town and pueblito. The santoral, or calendar of saints’ days, is so crowded with names that nearly every day brings a reason for a fiesta in any given neighborhood, and one of the most essential elements of these festivities is food. So important is the cultivation, preparation and consumption of nature’s bounties that there are ferias (fairs) dedicated solely to the local harvest.

The feria is a regional celebration, usually of a particular town or village. Fireworks, games, rides and food stalls offering local specialties are all featured at a feria. There is music and folk dancing, as well as verbenas – the night time dances that are held in the town plaza.

The following is a list of festivals throughout Mexico which feature culinary creations made with the food being honored, as well as other traditional dishes. This calendar is by no means a list of all ferias, but rather a month-by-month rundown of those devoted to particular foods.

If you happen to be visiting the area while a fair is going on, by all means participate. Taste the food, enjoy the music and dancing, and check out the artesania – every region has its special handcrafts. If it is not on this list, let us know about it! Karen’s E-mail.

The traditional Rosca de Reyes, in some of the most elaborate forms seen in the country, is the highlight of this celebration in the town which contains the remarkable Pre-Hispanic Malinalco ruins. A fantastic temple cut into the side of a mountain has 430 steps leading up to the inner sanctum of eagle and jaguar effigies. Malinalco is 25 miles south of Toluca on Hwy. 55.

In this southernmost part of the Federal District, known for its ancient floating gardens, which the visitor may see from colorful punt boats, a festival dedicated to the pre-hispanic grain features amaranth in its many forms, some of which are moles, hot drinks, the sweet snack bars called alegrías, and many cereals and noodles. A large crafts market is a permanent feature.

An internationally known Championship with entries from many countries. Exhibits, entertainment and superb chili.

Enjoy the tasty specialties of the Maya of the Yucatan peninsula in an indigenous village that was chosen for inclusion in the Mexican Photo Archives of the Beatrice Trueblood Studio in Mexico City. Dzula is 30 miles west on Hwy. 184 from Felipe Carillo Puerto (54 miles south of Tulúm on Hwy. 307.)

Dedicated to San Marcos, this fair in the state capital features local food and beverages, as well as cockfights, bullfights, and a lavishly decorated plaza. Said to be the largest fair in Mexico, there is a constant schedule of dances, processions, and exhibits. Bring your camera to this one.

This town, which produces some of the best hot sauces in Mexico, celebrates its bounty with a fair displaying the wide variety of produce grown in the area, as well as several regional food stalls and many locally produced salsas.
If it’s warm, cool off with a dip in the ocean; the beach is only 12 miles away, and the resort town of Mazatlan 39 miles away.

Located in an area of lush tropical vegetation 20 miles from Cosamaloapan, Veracruz, in the fertile agricultural region of the Playa San Vicente River, this town is known for its very sweet and juicy pineapples, and is a center for processing the fruit for worldwide exportation, as well as distribution all over the Mexican republic. The fair has large commercial, industrial and agricultural exhibits, and is a good place to buy a wide variety of artesanias from Oaxaca and Veracruz.

This is the gateway to the Maya Route, and where authentic Yucatecan food really begins. A little over 40 miles along Hwy 261 from the shrimping port of Champoton, Escárcega has no shortage of seafood, which is featured in a number of the rice dishes served at the fair.

Taste Mexico’s best wines and cheeses, and try some delicious local dishes, in this charming little town, 12 miles from San Juan del Rio and easily accessible from the Mexico-Queretaro toll highway. Cheese making, an honored tradition here, has expanded in recent years to include some gourmet varieties. The increasing popularity of this fair has generated appreciation for the lovely small hotels and inns in the area.

This pueblito is just a few miles from downtown Puebla, but looks like a painting from an antique Mexican calendar. Set against a backdrop of snow-covered volcanoes, amidst fields of nopal cactus, this town celebrates its spiney harvest with a food fair featuring nopal salads, stews, stuffed nopales and even nopal ice cream, as well as other delicious regional specialties, grilled meats and barbeque. Listen to one of the largest pipe organs in Mexico in the town’s 16th century church.

Built on a hill overlooking the bright green plains of northern Veracruz, Papantla is the center of the Totonac culture and one of the world’s largest vanilla producing zones.
The festival hosts indigenous dancers from all over the area performing the dances of the Quetzales, Negritos, and Voladores, the last one being done from a 50-foot pole in the church atrium. There are booths with regional food and beverages, small animal figures and baskets woven from vanilla bean pods, sachets and vanilla essence.
Only 6 miles from the prehispanic ruin site of El Tajin, with its famous pyramid of 365 windows, Papantla is an ideal place to stay if visiting the site and museum. 01 800 8316120

Attractive wooden cabins are constructed near the Zocalo – main plaza – for the purpose of displaying the best of Oaxacan mescal, currently a popular, upscale beverage in both foreign and domestic markets. In addition to marvelous Oaxacan culinary specialties and music, a wide variety of artesania is featured.

Taste wine from Mexico’s largest and most famous vinyards of the Santo Tomas Valley in this delightful coastal city on the Bahia de Todos Santos. The festival also offers a variety of comida corridas, traditional Mexican main meals.
A great time of year to enjoy the Pacific coast side of the Baja peninsula.

This event features the wide variety of Mexican antojitos – appetizers and snacks – based on the corn tortilla. There are bullfights, cockfights, games and processions. Tala is easily accessible from the main highway that connects Tepic and Guadalajara. (311) 214-8071 to 73

Located in the highly productive La Laguna farming district, just on the other side of the Nazas River from Torreón, Coahuila, Gomez Palacio pays tribute to its two most important crops with commercial and agricultural displays, food stalls, entertainment and beauty contests.

The delicious and versatile peach is a natural for preserves and baked goods, and they are available in abundance to be sampled at this fair. Regional dancing and a traditional verbena – town dance – are highlights of the feria.
Sirutato is located in the part of Sinaloa called Badiraguato, cahita-tarascan for “the place of rivers among mountains”, and is on the Humaya River, north of Culiacan. (668) 812-1336 / 815-1090

Cuetzalan is located on the western slopes of the Sierra Madre Oriental, where some of the best coffee beans in Mexico are grown. The aroma of the freshly roasted beans beckons aficionados from other parts of Mexico and the world to come to the feria and taste the coffee, local fruit liquers, and antojitos in abundance. This fair also highlights local artesanía, especially the embroidered huipiles of the region. Nearby is the 35-meter waterfall La Gloria, and the niched pyramids of Yohualichan. Cuetzalan is a day trip from Puebla, via highway 129, and from Mexico City via 190 and 129.

Literally thousands of mounds of mole paste of every type fill the stalls set up for the preparation, tasting and sales of this quintessentially Mexican dish. Eat your fill at the many impromptu restaurants, and by all means take some home; mole paste keeps for several months in the freezer. San Pedro Actópan is located just outside the Milpa Alta section of southern Mexico City. 55 5844 9022 / 5844- 2893

A huge brick oven is constructed in the main plaza and bakers from Cholula and neighboring towns give demonstrations of traditional Mexican breadmaking. There is plenty for tasting, and over 150 different kinds of bread for sale, fancifully displayed in various forms, including those for the upcoming Days of the Dead. Located 4 miles from Puebla on the Recta highway, Cholula is also the home of the Pyramid of Quetzalcoatl, as well as several 16th century churches and convents. A 15-minute bus ride or drive from town is Tonanzintla, where the fantastic Indian church attracts world travelers. (222) 261 2393

Beautifully shaped loaves, including the famous pan de hilo, which is made into little animal forms to decorate the statues of the Virgin on Candlemas, are for tasting and for sale at the fair. Also featured are the meat stews for which the town is well-known, and a variety of handmade Christmas ornaments. Pottery made from the red clay of the area is a cottage industry, and country roads are lined with a variety for sale. Chignahuapan, which has hot springs and a mineral bath spa, is a three-hour drive or bus ride from Mexico City. (797) 971-0077/ 0019 / 0485

This month-long fair highlights corn in many forms: soups, stews, pozoles, and the multitude of enchiladas and antojitos based on the corn tortilla. This town is an important center for the observation and study of several species of tropical birds which reach the northern limit of their range in the tropical vegetation formations of this area. An easy one-mile walk from the center of town provides an excellent view of bird habitats. The turnoff to Gomez Farías is 40 miles south of Ciudad Victoria on Hwy. 85.01 834 315 6249

Huge radishes are carved into grotesque shapes and fanciful forms, including entire nativity Buñuelos are traditionally sold and eaten and the plates smashed afterward. The next night there is a parade of floats through the center of town. 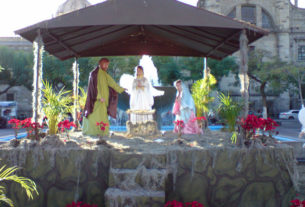 Racism And Business In Mexico 2