Mexicans are world-class protesters. They bring it on with enthusiasm, deep determination, raw emotion.

Generally speaking, Mexicans I know are a patient lot, willing to wait in long lines for routine services, tolerant of government ineptness, power outages or no beer today at the neighborhood market. That they sometimes boil over in public protest is intriguing.

I have read that the people, outwardly genial, are increasingly exasperated. They supposedly see a system that rewards the rich for greed and punishes the poor for hard work. Pay goes up a few pesos but the real value of wages goes down. The drug war is more than an aggravation. There is growing fear and maybe real danger.

Most protests seek some kind of reform. Some are purely political. Each summer, the teachers’ union in Oaxaca seems very serious.

Mexicans are not completely confident in their democracy. I do believe they still think in terms of individual rights, of me and my instead of us and ours.

A noisy minority, even a few, can inconvenience the multitudes. This is how it has been for a long, long time.

Mexicans are still pondering the viability of the voting booth. Lacking faith that right will eventually prevail, they sometimes go beyond noise and resort to force. Protesters justify lawlessness by claiming official corruptness. Could be they are sometimes correct.

I first noticed Mexico protests in 1968. The crushing defeat of the student protest just before the Olympics left deep scars. The 1987-88 political protest created new layers of activists. The 1994 Zapatista uprising caused some to believe anything is possible. The 2006 post-electoral mass mobilizations about suspected fraud made black headlines. The current protest against blood violence is big but offers no solution.

Mexico City is the world headquarters for protests, in part because of the diversity of opinions and in part because government does little or nothing to discourage it. From a safe distance, I monitored a three-month segment of last year. The average was 8.8 protests per day.

Some protests are mostly fun, just an excuse to wave arms. Some are a walk in the park. Some are violent, destructive, dangerous, even deadly.History has it that section 22 of the Oaxaca teachers union conducts an annual strike, usually for more pay or less work or both. The 2006 protest, encouraged by professional radicals with additional agendas, got a bit out of hand when government had the audacity to deny demands.

What happened was all hell broke loose. Militants pitched tents and hung plastic tarps across what was the charming central plaza and all around and in between colonial buildings. For some reason, they put up pictures of Stalin and Lenin and Marx. They built barricades. With spray paint, they put up declarations of rebellion. One said “Long live the popular struggle!”

Teachers, associates and imported foreigners took over downtown Oaxaca city. They imposed blockades on thoroughfares, stretched barbed wire here and there, burned buses, broke windows and made a mess of the beautiful historic district.

Police did not intervene.

Teachers and others demanded the resignation of Gov. Ulises Ruiz. His response wasn’t particularly diplomatic. He actually gave the teachers an ultimatum, a deadline for going back to work or losing pay. That’s right, teachers were on salary while on strike.

Protesting teachers countered with a mega-march. Some said it was more creative than their classrooms. In addition to the usual hand-held signs with slogans, there were witty banners and funny puppets and a mock funeral for the governor, complete with black casket.

After the death of eight ordinary people and New York photojournalist Brad Will, president Vincente Fox noticed the crisis. The protest was finally put down or just ran out of steam. It lasted only six months.

There was a dandy in Boca del Rio, Veracruz in 2007. Protesters threw eggs at a new bronze statue of Fox. They fastened a rope around the neck and toppled it, breaking an arm and an ear. Mayor Francisco Gutierrez de Velasco condemned the acts as impolite but said municipal police did not get involved because the statue was state property.

Many protests are about money. Farmers and friends held protests all across Mexico as tariffs on sugar, corn, milk and beans were lifted. Miners, metalworkers, union sympathizers or hired cheerleaders marched on Mexico City to demand that companies give in to strikers. There was a spirited outburst about the “creeping privatization” of the oil industry.

Now and then the environment becomes a cause. Affluent mothers in cashmere sweaters and lawyers in sharp suits sang a hymn to nature and stood in front of heavy machinery to stop tree chopping in upper-crust boroughs in Mexico City.

Alas, some didn’t even notice when hundreds of cyclists, about half without clothes, pedaled city streets to promote eco-friendly transportation. The theme? “Save your planet, ride a bicycle!”

One grandmother who saw too much responded: “You should shave under your arms.”

The most recent nude ride was in favor of more bike space and against so many cars. The protest after that was women standing up against macho mistreatment.

The drug war is a very hot topic. A lot of people express disapproval of military involvement. They plead for an end to conflict and crime. How to do it?

Kidnapping is a very sensitive subject. There are sad cries by relatives carrying photos of missing loved ones.

There was one heck of a storm about the high cost of admission to a Maya archaeological site (30 pesos) in Chiapas. Six were killed. Protesters fought police with sticks, rocks and machetes because gate receipts were not being used to improve the infrastructure.

Hundreds of doctors and medical professionals staged a protest in Ciudad Juarez, denouncing months of robberies, extortions and kidnappings. They said they were tired of risking their lives to save other lives.

The very thought of building a new dam and flooding a field will trigger a protest. Gay rights is a colorful cause. Animal rights inspire an occasional protest.

A move toward educational reform led to the loss of 70 school days in Morelos. Teachers did not want to be told they should be qualified to teach.

Sanitation workers stopped picking up trash and took over a thoroughfare in Villahermosa after hearing that the city planned to privatize their gig. Music students marched and played off key in Tuxtla Guti Acrrez to protest a lack of security at Chiapas University of Sciences and Arts.

Protesters in Veracruz staged a public cutting and burning of credit cards in disapproval of rising interest rates. Leaders of the “Death Saint” church protested official destruction of 30 shrines in northern Mexico. Greenpeace activists inspired a protest over the government decision to allow genetically modified corn. They said it could ruin the nation’s native crop.

Inconvenience was the cause of a 2009 protest outside a Mexico prison. Mel Gibson was going to shoot a movie at Ignacio Allende in Veracruz. Hundreds of inmates were to be transferred to clear the way. Relatives yelled and screamed and won.

Some protests are spectator sports. I once walked right into the middle of one at the central plaza in my town of Jocotepec. I first thought it might be a mango sale but a big crowd was delivering a loud complaint about something el presidente had done or not done. One matron was leading the charge, vigorously trying to push past two husky guards.

When I got close, perimeter protesters, to my amazement, parted as did the Red Sea. Others stepped back. I strolled through the throng to the very gates of government. The guards nodded and let me pass. Inside, I asked for information about something very important, perhaps the increase in water costs. The answer was typical: Come back on Thursday.

My departure was uneventful. The guards acknowledged me and the people again created a path. I wondered how could this be.

Later, my neighbor, who had seen it all, explained. It was not a miracle. I was wearing an old cap from the Tennessee prison system. It had a very official looking badge printed on the front. Fussing folks were completely fooled. They had heard that Jocotepec had called Guadalajara for security reinforcements.

They thought the old gringo was the new captain. 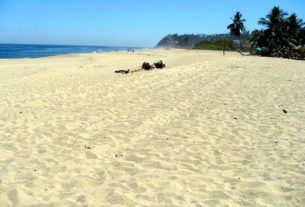