It is customary for Mexican cooks to save the seeds they remove from dried chiles and store them, mixing several varieties in the same jar. This traditional recipe from El Bajio restaurant in Mexico City may be made with either boneless pork leg or beef shanks.

For the meat and broth:

Place the meat in a stockpot with the water to cover, onion, garlic and salt to taste. Bring to a boil, lower heat and simmer until tender. Remove from heat, strain and reserve broth.

In a dry skillet or comal, toast the sesame seeds, chile seeds, cloves, allspice and cinnamon just to the point of fragrance, being careful not to burn them. Remove from the heat, place seeds and spices in a small bowl and cover with hot water to soak. (Using some of the broth instead of water is a tasty option.) When the seeds and spices have softened (use the cinnamon to judge this), drain off the liquid and grind them together in a blender, food processor or molcajete. Set aside.

Heat 1 tablespoon of the oil, add the tomatoes, onion and garlic and sauté until soft. Place this mixture in a blender with the ground seeds and spices and enough broth to allow free movement of the blades, and puree.

Heat the remaining oil, add the puree and cook it, adding a little broth at a time and stirring constantly, to make the pipian sauce. (It should be about the consistency of heavy cream.) Add salt to taste.

Place the pieces of meat in the sauce and heat through. Serve immediately, with Mexican red rice if desired. 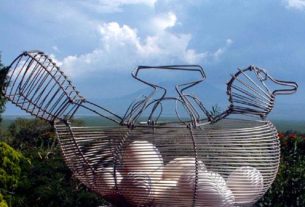 Learning to shop in the village