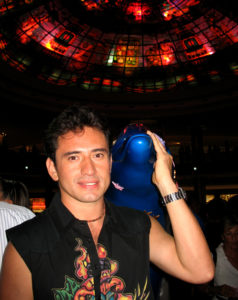 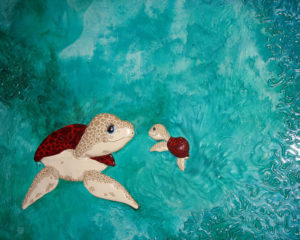 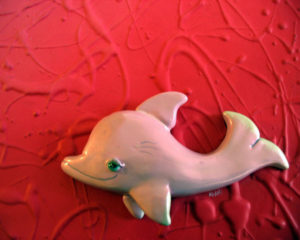 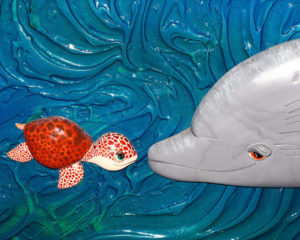 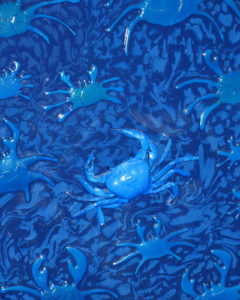 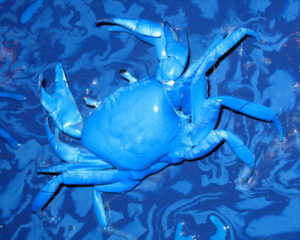 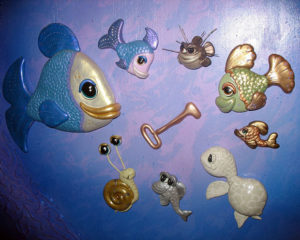 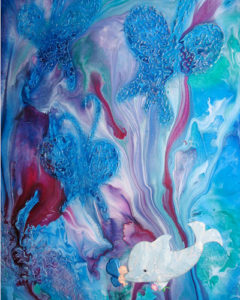 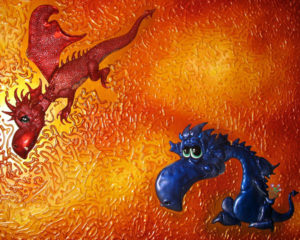 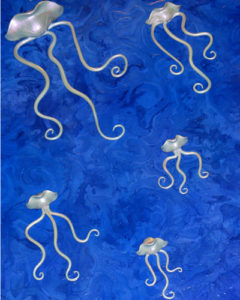 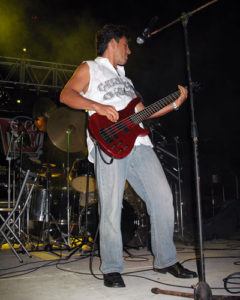 “Nature is art,” says 30-year-old artist Alan Vázquez. “You can find colors in the flowers and the reef fish that we humans can not equal, even with the most sophisticated technology. (And) the roar of thunder, like the fierceness of the sea that we feel in our chest, is a vague musical note through time.”

The natural world serves as a major catalyst for Vázquez’s pieces, which are often filled with images of marine life. His own encounters in the outdoors have given him a vast appreciation for wildlife and he frequently draws on these experiences when creating his work. For example, he recounts how a diving trip off the island of Cozumel resulted in the creation of a new piece of art.

“I got to see carey (hawksbill) turtles against a turquoise background and thus, I was inspired to make the painting Paternidad (Paternity),” Vázquez says. The mixed-media piece features the face-to-face profiles of a small sea turtle and a benevolent-looking dolphin set against sparkling waves of green-tinged blue. The painting has a sweet simplicity to it but, like all of Vázquez’s artwork, it carries a profound reminder for all who view it.

“At first glance, my pieces seem to be only aimed at children, but they actually have a very serious message,” Vázquez explains. “The topics that I address in my artwork are an SOS to protect our scarce natural resources of today, this state’s marvelous archeological places of interest that are world heritage sites, as well as the immense biodiversity that surrounds us.”

Vázquez has a particular fascination with species that are endemic to the Mexican state of Quintana Roo, such as whale sharks, blue crabs, coral reefs and manatees, as well as the hawksbill, leatherback, loggerhead and green sea turtles. A native of Mexico City, he has had the opportunity to witness some of these creatures up close during the past 18 months that he has spent living in Cancún.

“I have decided to put down roots in Cancún, where I have spent a beneficial and radical year and a half,” Vázquez says, recalling his adventures on the Yucatán Peninsula that evoke examples of nature’s immense beauty. His time here has included such wondrous moments as swimming alongside a whale shark, watching green sea turtles lay eggs, taking in a meteor shower in Tulum and observing the Spring Equinox at the majestic Mayan ruins of Chichén Itzá.

Vázquez also experienced nature’s fury firsthand when Hurricanes Emily and Wilma swept through Cancún in 2005 and wreaked havoc on the city and surrounding areas. However, even amid the destruction and despair surrounding him in Hurricane Wilma’s brutal aftermath, the artist still found a way to turn the experience into something positive. Vázquez began collecting discarded items and organic waste to use in his artwork and turned it into an activity for the restless children in his neighborhood, whom he then paid for their efforts. Between the artist and his helpers, they amassed a vast amount of materials, including sheets of plywood that people had used to cover windows and wooden beams that had been utilized to secure doors, as well as organic waste like tree trunks, branches, roots and even some dead animals. This recycling of materials is a technique that Vázquez has always employed in his work.

“No painting is alike,” the artist notes. “For example, I used real crabs that were run over on Kukulcán Boulevard for the piece Seducidas por la luna (Seduced by the moon), just as I used sand, roots and resins in Místico Tulum (Mystic Tulum).”

The aforementioned recycled materials lend a unique aspect to the artist’s pieces, which are primarily composed of resin on wood. As far back as the age of eight, Vázquez was already familiar with resin and other elements that he uses in his artwork today, since his father ran a business selling materials for industrial, decorative and auto paint jobs. “My greatest teacher has been my father and without knowing anything about art,” Vázquez says. “He taught me how to combine colors, how to use resins, how to treat wood, etc.”

Because of his exposure to and interest in these less conventional types of artistic materials, Vázquez did not want to study traditional techniques like oil, watercolor and acrylic. Thus, after graduating from high school, he set out for Madrid, Spain. “There was where I started the great adventure of my artistic training,” Vázquez says of his time in Europe. “I met street artists in Paris, Amsterdam, Barcelona, Toledo, Segovia (and) Madrid. They were my ‘accomplices’ who would get me involved in the most sophisticated, homegrown, autodidactic, chemical and organic techniques.” At the age of 20, Vázquez returned to his home country of Mexico, where he has continued to hone his craft.

For this artist, the creative process is one of delight and discovery. Once he has amassed his materials, Vázquez begins looking for the theme that he will focus on in his new creations.

“In this way, the adventure begins – playing with materials, uncovering new colors and characters, but above all, discovering new sides of myself,” says Vázquez.

The artist prefers to work from midnight until 6 a.m., when distractions are less likely to occur, and has set up his studio in such a way as to best stoke his creativity. The fundamentals of Vázquez’s work space include good lighting, music and materials that are within easy reach. Inspiration is always close at hand, as there are various fish tanks in the workshop that are filled with creatures like tarantulas and snakes that Vázquez rescued from people who were about to kill them.

This creative sanctuary, known as Fábrica de los Sueños (Dream Factory), does not serve just Vázquez alone, as he has opened it up to artists who are perhaps most in need of assistance – those with physical handicaps.

“I christened my workshop with the name Fábrica de los Sueños based on the metaphor that from a small dream, a great life is born. And so with that impetus, disabled artists can stand out, become known and sell their work, and in that way, be self-sufficient,” Vázquez explains.

The seeds of this idea germinated back in April 2005 when Vázquez saw work by photographer Hernán Cáceres at the Cancún festival Las Bellas Artes del Caribe (Fine Arts of the Caribbean). When Vázquez asked the event organizers about Cáceres, they told him that the photographer was unable to attend the event because he is a paraplegic who had shot those pictures before the accident that left him paralyzed had occurred. Vázquez eventually visited the photographer at his house and the two struck up a friendship.

“Only one of Hernán’s hands is functional and he has designed everything on his computer,” Vázquez notes. “Honestly, at the beginning of my relationship with him, I only thought about helping him, but now I understand that he has helped me more through his admirable example and his desire to live and forge ahead. God chooses people who have the ability and the will to remind us that we have the most beautiful things in life within reach and in our own body.”

Vázquez has invited Cáceres to participate in various projects, including the contest Arte en Delfines (Art in Dolphins) that was organized by the local city council. Cáceres won first place in the competition.

Aside from Cáceres, Vázquez has also shared his studio and resources with 79-year-old artist Adolfo Díaz, who has vision problems and suffers from vertigo. The three artists exhibited together in the show Las Bellas Artes del Caribe II that was held this past November.

And with each painting that Vázquez sells, his vision to help disabled artists is further realized. “I set aside 40% of each sale to enhance my workshop, whether it is with wheelchair ramps, materials (pencils, paint, etc.) or putting on expositions for my artists.” It seems that giving back to other artists is a natural reaction for Vázquez, as he is incredibly grateful to be blessed with the ability to create.

“Art is my life: painting is my purest essence, music is the battle dragon that roars in my voice and my heart, poetry is the executioner of broken dreams, photography is my third eye and sculpture is my three-dimensional sense of touch,” Vázquez says. “The world is art and it is the greatest expression of any living being.” 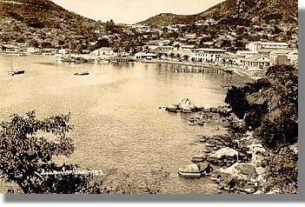