Secreted behind a thick adobe wall that runs along Calle Ocampo, Ajijic’s main thoroughfare, lies doña Carlota’s patio. I cherish this tiny, private paradise for to me its warmth and simplicity represent the heart of authentic Mexico.

At first glance this seems a strictly utilitarian space. The furnishings are spare–a couple of rickety chairs and an old table stacked with an odd assortment of cooking utensils. One corner is occupied by the fogón, a simply structured soot-blackened brick hearth. Heaped next to it is an untidy stack of slender oak and mesquite branches, the leña–firewood–responsible for the patio’s distinctive smoky redolence. On the opposite wall stands the lavadero, a cement scrub board and open water tank where mounds of laundry are washed each day by hand.

Though high walls enclose the patio, and I know cobblestone streets lie behind them, I always have a sense of being close to nature when I’m here. To begin with, the space is completely open to the sky above. A single scraggly tree protrudes from a small square of earth left open near the middle of the cement floor. Its branches, loaded with small juicy limes, provide a shady canopy from the brilliant midday sun. Cheerful geranium blossoms spill out of coffee cans nailed helter-skelter all around the walls. Intermingled among them are a half dozen tiny cages housing a variety of doves and canaries. Their songs and fluttering wings interrupt the slumber of a fat calico cat who, with twitching tail, hungrily gazes upward before dozing off again in a tiny puddle of sunshine.

In truth, the patio is the hub of activity for a large and loving family.

Doña Carlota, recently widowed, shares her living quarters with two maiden daughters. Her married daughter, Alicia, lives with her husband and child in a small apartment they built on the second story. A small wooden gate next to the lavadero leads to the adjacent home of her son Narciso and his familiy. Behind that is an unfinished apartment being built in slow stages by another son who works fishing boats in Alaska for most of the year.

It’s been quite a few years since the family built and equipped a kitchen for doña Carlota, but she eschews such “modern” conveniences as the gas stove and the electric blender, preferring to prepare food by the traditional methods she learned as a girl. She does most of her cooking at the fogón out in the patio, claiming that food just doesn’t taste right unless it is prepared in clay cazuelas over a wood fire. Her tasty sauces are created by grinding chilis and spices together in a molcajete, the same type of stone mortar and pestle used in pre-columbian cultures.

While doña Carlota dedicates most of each morning to time-consuming cooking tasks, her daughters and granddaughters help out with the other daily household chores: shopping for comida ingredients, sweeping, mopping and tidying the house, washing laundry and dishes, ironing, caring for the youngest children.

As soon as the main midday meal has been served, doña Carlota begins preparing nixtamal for the next day’s supply of tortillas. Making use of the embers remaining in the hearth, she sets a bucket of dried corn, slake lime and water onto the fogón.

Her first task each day is an early morning trek to the molino where she has the soaked corn ground into masa. Then its home again to begin patting out the dough into perfect rounds, toasting them on the blazing hot griddle called el comal, and wrapping the stacks of steaming tortillas in a large hand-embroidered napkin.

Many years ago I asked doña Carlota to teach me the fine art of tortilla making. She patiently showed me how to roll the masa into a ball and with twisting wrists gently slap the dough between my palms. The results were appalling fat blobs in hideous asymetrical shapes. To this day she recalls with great amusement my abject failure to master this basic womanly skill.

Family life in the village includes an endless string of rites of passage: weddings, baptisms, birthdays, funerals. Doña Carlota generally takes charge of the feasting that accompanies such events. A huge vat of pozole was dished out to friends and relatives who accompanied the family through the nine days of mourning and prayers following the death of her husband last year. For her grandaughter Luz Dolores’ 15th birthday fete some months before, a dozen chickens raised by the family were slaughtered and stewed in pipián sauce, to be served to party-goers along with massive quantities of rice and refried beans.

Undaunted by my disastrous attempt at tortilla-making I recently asked if I might assist in the preparation of pork in sweet mole sauce planned for a special family comida. on Narcisco’s birthday. I thought hands-on experience would be the ideal way to procure the recipe for one of my favorite dishes. Determined to meticulously record the required ingredients and methods, I set off on the appointed day, notebook and pencil in hand.

The first step was cooking the meat. That part was easy enough, but I was astounded to discover we would prepare an entire leg of pork, large enough, by my calculation, to feed at least 30 people. Right away I realized that to cut the proportions to reasonable amounts–for my family anyway–would require math skills that are out my league.

Then came the sauce. This was real hands-on stuff, so much so that there was no opportunity to stop to write things down. I’ll just pay close attention and make notes later, I thought foolishly. First doña Carlota tossed two types of dried chilis onto the comal, tossing them deftly as they toasted. My eyes began to water as my nostrils filled with pungent smells.

The toasted chilis went onto the grinding stone along with an amazing assortment of nuts, seeds and spices. Measurements were non-existent: a pinch of this, a sprig of that, a handful of the other. All of it got mashed together until it formed a thick paste. A couple of globs of lard went into a large clay casserole resting above the fire. Into the hot, smoking fat went the paste, making a frightening fizzle as it released more exotic fumes. With the addition of stock from the meat, dark chunks of sweetened chocolate and heaps of brown sugar cones, the sauce began to thicken and take form.

Doña Carlota stirred the sauce, spooned out small dabs into the palm of her hand, took tiny tastes, adjusted the seasoning accordingly– a pinch of salt, more sugar–then stirred some more. When the sauce finally met up to her discerning standards it was time to add the meat and let the whole concotion stew for a while. By then I had totally lost track of the what, how much and when. Didn’t care either. I knew that I would never be able to reproduce this culinary masterpiece. And at that point I was overwhelmed by gustatory anticipation, knowing that in short order I’d be diving into a stack of fresh tortillas and happily lapping up a messy plateful of sweet, rich mole.

These days I’m more inclined to visit with doña Carlota in the quiet hours of the late afternoon. It is then that she will put aside her carefully stitched embrodiery or book of scriptures to share stories of her youth, of a time when groves of coffee trees flourished along the Lake Chapala shoreline and there were no foreigners, no tour buses, no phones or fax machines. Resigned to having flunked out at cooking, I am more content in my role as student of local custom and history. But the greatest success I could hope for would be to emulate doña Carlota’s delicious recipe for life: Hard work and simple pleasures generously seasoned with love and laughter. 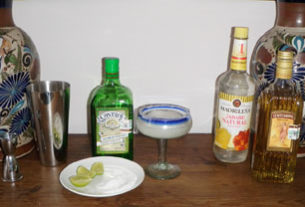