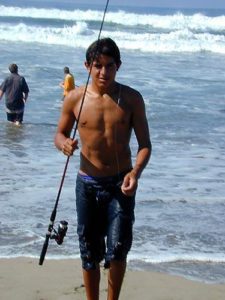 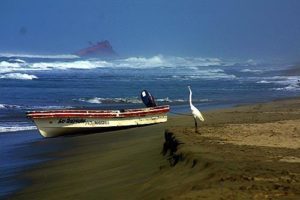 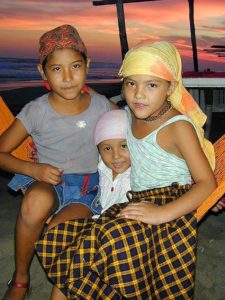 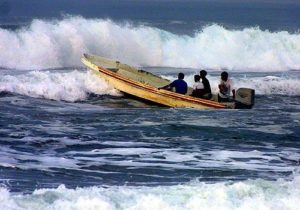 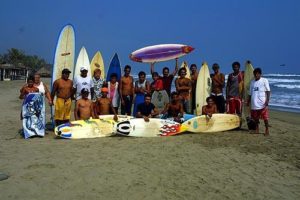 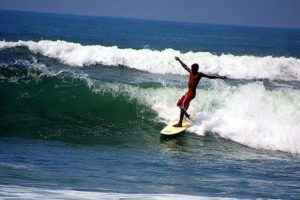 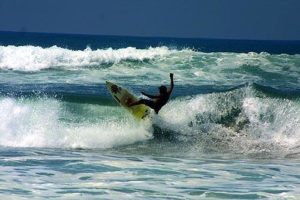 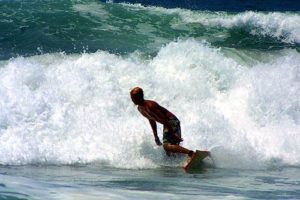 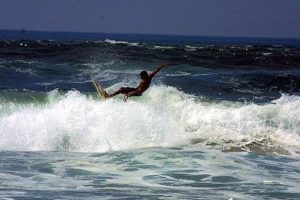 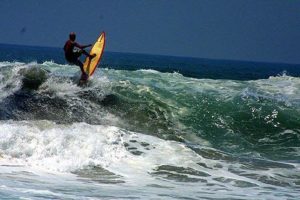 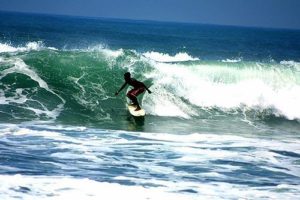 Adriano is a sixteen-year-old surfer who helps his mother run one of the many small beachside palapas in the resort community of Playa Azul, north of Ixtapa. You won’t read about Playa Azul in most guidebooks as it is a resort that for the most part has yet to be “discovered” by anyone other than the thousands of Mexicans who cannot afford or desire the trappings of Ixtapa, Acapulco or Cancun.

Here it is “rustic.” The beaches are inviting and the sunsets beyond description. The people, those who are on holiday and those who work in the restaurants or small market shops selling beach wear and toys, are friendly, almost too friendly for those of us who are used to keeping a certain distance between strangers.

I met Adriano while early morning surf fishing. Miles of isolated beach and yet he ends up fishing right beside me. I am politely shown that the bait and tackle that I was using was not up to snuff. Who was I to question the local expert as he started to pull in fish after fish?

For over two hours we fish side-by-side exchanging small pleasantries. He continues to catch fish and I don’t, but that does not stop him from making constant changes to my gear and providing suggestions on improving the way I am casting or holding my fishing rod. I eventually give up and retire to Adriano mother’s palapa “The Pirate” where Dorothy and Adam were watching us fish.

Adam, 13 years old, is an excellent swimmer, having gone through every Red Cross swimmer’s training program available for his age group. I feel confidant in letting him swim with me as he now takes pride in beating his mother, a former lifeguard in poolside races. Even in the massive surfer waves off Puerto Escondido he had no trouble negotiating the boogie board through the water.

Swimming out to the waves, I encounter something a little different – the pull of the currents is much stronger than I am used to. Not to mind, we will just catch a wave back to shore with our boogie boards. The waves, too, are different, one after another, none big enough to surf, but very rough. One moment, Adam is beside me, the next time I look he is a hundred yards away.

The waves! These are not surfing waves; they break and churn in different directions, leaving you bobbing up and down, the shore getting farther and farther away. I notice that Adriano is swimming next to me. “First he out fishes me, now he wants to show me how to surf,” I think to myself.

Although getting further from shore, concern still does not cross my mind. I notice Adam in the distance shouting. I can make out a look of panic on his face and hear the words: ” Dad, help me I’m scared!” coming across the water.

I swim as hard as I can in his direction. It is useless; I’m not getting any closer.

He is now thrashing and being thrown around by what seem to be even bigger waves. Looking toward shore I can’t believe the distance we have been dragged out from land.

“The goddam guide books – they always warn you about the undertow!” I say out loud, knowing that I had gotten cocky and careless with not only my life but also the life of my son.

Adam is drowning or at least he is heading that way. He’s in full panic mode, a good quarter mile from shore and in treacherous water being pulled further away from me by a vicious undertow. I am just about to abandon my board to try and swim to him when Adriano makes a gesture for me to remain calm and stay with my board. He has a poise about him that gives me hope that he knows what he is doing.

That hope turns to confidence as I watch him with astonishment swim towards Adam. Like a dolphin, he cuts through the waves in a direct line. Within a minute he is along side my son, first calming him down and then getting him on the board and pushing him towards shore.

Relief comes over me, but it, too, is short lived as, no matter what I do, I still cannot catch any of the waves. I am even farther out. The shoreline is now disappearing behind the rolls of the waves. “Don’t panic.” Adriano pops up next to me, grinning with a warm reassuring smile. Like a child, I follow his instructions, getting up on my board and lying as flat as I can as he easily pushes me toward shore, something that only moments before was impossible for me to do myself.

The touch of sand beneath my feet is a welcome relief. Playa Azul. Blue Beach.

Adriano is the youngest of four brothers; his father is serving time in a Mexican prison. He has lived and worked at the beachside palapa all of his life. Adriano says he will be entering a surfing contest next May where he dreams of winning enough money to pay for the first year of college. He has one more year to graduate from high school. Unlike his brothers, he wants to go on to college. His mother, Dahlia, says she cannot afford to send him.

“How much does it cost?” “About 700 pesos, plus the cost of a uniform, stationary and books per year.”

Why can’t they afford what amounts to less than $200 Canadian dollars?

Life always gets complicated but sometimes if you are lucky it can get fulfilled, even for only a moment.

There is very little we can do for Adriano, though Dorothy and I will try and assist him over the next year to achieve his dream of going to college. We’ve made that commitment to his mother and have asked for assurances that the money we give them will be used for his education. Adriano is a wonderful young man who made sure that Adam and I were not in danger from a very wicked undertow.

Adriano didn’t ask for any money, but what he did hint for was that I use my photographic equipment to help his club…the Agua Azul Surf Club. They needed pictures to get sponsorships for events. I had the photo equipment and offered to take pictures and then send the club president a cd of the pictures I took.

The club is made up of approximately 50 Mexican boys and young men of various ages and backgrounds. Some use the club as a means of staying out of trouble. I was fortunate enough to get to know them and the president of the club. All of them were grateful for the following surf pictures I took. Gathered around a table I was able to show them some of the photos on the computer. They look forward to the prints I have made.

Most of the money earned from the palapa restaurant must be divided up between lease rates to the municipality for use of the palapa, their own cost of living and also for her husband’s expenses at the prison – where there is no free ride. The prisoner must pay food, clothing and sundry costs.

A day at a Mexican beach, it gives our middle class Canadian family a great deal to think about and be thankful for.

Located on the Pacific Coast in the State of Michoacan: South of Puerto Vallarta and Manzanillo and North of Ixtapa and Acapulco. It boasts a lush tropical environment with palm lined beaches and blue waves crashing against the beach.

Playa Azul is a small beachside town with a few hotels and an abundance of seaside palapa restaurants. It has a few dirt roads – usually unnamed- and a small malecon running parallel to the restaurants and coastline on the beach.

There are no Golden Arches or any other traces of fast food popular cultures to the North. Small booths sell beachwear and sandals. Jewelry and T-shirts. There is one disco, open on Friday and Saturday nights.

The Playa Azul Surf Club can be found kitty corner to “The Pirate” palapa restaurant.

Playa Azul is known for its unbelievably beautiful sunsets. Tourists and locals crowd the palapa bars and restaurants nightly for one last drink and to watch the sun make its fire-clad exit for the night

.Playa Azul is not listed in Frommers Guide to Mexico but should be.

Personal Views of Easter in Mexico

Cozumel – Island Of Many Faces