The other side of the coin

I went to look at Butterflies last week and I hit the mother load of Monarchs; one of the ten sites in central Mexico where something like 150 million Monarch Butterflies spend the winter.

The conditions were not nearly as bad as mentioned in the daily press. The death rate of 80% due to a hail storm in January was probably exaggerated to attract attention but it only affected one of the ten reserves. Another reserve was said to lose 40% but that number, too, was probably inflated. All I know is that I saw plenty of Monarchs.

Ever since I first heard of the migration of the Monarch and saw the very first pictures of their winter home in the National Geographic back in the mid 70’s, I wanted to go and see them for myself.

Along the way, I learned more about the Monarch than I was ever taught in school. Of course, when I was in school, while it was known that they and some other butterflies migrated like birds, nothing was known, until 1975, of where the southern end of the migration was. People in the US and Canada saw them leave, many saw them gather in great clusters, often in the same place and about the same date each year on their way south. But their path was lost in the mountainous volcanic terrain of Central Mexico.

Then in the mid 1970s, scientists finally found the monarchs’ winter home, actually homes; comparatively small areas in Pine Fir forests at an elevation of about 10,000 feet above sea level.

None of the sites were easily accessible by road and none were truly near any major towns. Scientists studying the Monarchs tried to keep the locations secret in order to preserve them, but the word spread and for the next few years unwanted and uncontrolled visitors from loggers to tourists plagued the scientific research.

Fortunately, the Mexican government stepped in and established the “reserves” of the present day. Access into these reserves is tightly controlled, a small fee ($2 US or 15 Mexican Pesos) is charged, and people from the nearest village act as guides.

Of course, the butterflies cluster where they want, not where paths make it easy to see them. That’s one reason why the guides are needed. They keep track of movement within the reserve and know where the vast majority of butterflies are at any given time.

The Monarch cluster on just a few trees at a time. Many cling to the trunks, so many that they form a second bark with very few open spaces. But most hang from limbs and from each other in giant pendants as much as four feet long and two feet across. A mass of Monarchs that can run to several thousand. So many have been known to cluster on one limb as to cause it to snap.

The first butterflies arrive at the reserves in late November, having left their summer areas in September or October. They fly up to 120 miles a day, never at night. They are slowed by cold, rain and adverse winds.

Since Monarch caterpillars feed only on milkweed leaves, the wintering butterflies cannot leave until the first milkweed plants come up in the southern US, usually in late March or early April. Then the Monarchs that have lived since the previous September start back north, mate, the female lays here 200 eggs, one to a milkweed leaf, and dies (The male dies soon after mating). Each succeeding generation lives less than 2 months as the Monarch works its way back north – some arriving in the northern US and Canada by late May or early June.

There are several ways to get to one of the accessible reserves. There are many organized tours that include the Monarch reserve as a key port.

That is, in fact, how I saw the Monarch. I flew to the city of Guadalajara where I joined a four- day, three-night tour led by world famous naturalist and expert on Western Mexico, Tony Burton. 16 of us from all over the US and Canada climbed on a 39-passenger private bus. (The tour was limited to 26, but events everyone knows about reduced what usually is a sold out tour.)

The first two days were spent sightseeing (churches, markets, archeological sites, etc.) Sadly, the weather did not cooperate. Although the average February rainfall is less than 0.2 inches, the area got more than a five-year supply those first two days, and the temperature never got much above 50 degrees. We were also traveling at an altitude that put us in the middle of cloud banks. Much of western central Mexico is well over a mile above sea level.

For the mile (uphill) from the parking lot to the entrance to the reserve, there were souvenir stands, tamale stands and “sanitary facilities” (1, 2 and 3-holers… 20 cents). The parking lot was at an elevation of 9600 feet; the butterflies at 10,000 feet. The walk took over an hour, all uphill.

By this time of year many of the butterflies have begun to get active, flying away from the trunks or clusters to find food or water, weather permitting. The day we were there the weather did not permit. Too cold. Jacket, toque and glove weather. So we saw the Monarch in their clusters.

Our guide, Tony Burton, was a wonder. Knowledgeable about all sorts of things; flora, fauna, geography, scenery, sights, and Monarchs. He is personable, friendly, adaptable, and accommodating beyond limit.

I don’t see how I could have had a better guide. The cost of the four-day, three-night tour was $360 that covered everything except souvenirs and the 3-holer.

In spite of the weather related problems mentioned above, I’m very glad I went. That two-mile hike at an altitude approaching two miles above sea level is something I wouldn’t want to do every day but the reward of seeing all those Monarchs at the top made it worthwhile, at least once. 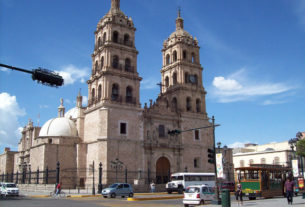 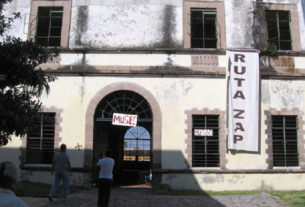