Organic farming has helped some indigenous peoples in Mexico to reinvent themselves.

How many people are there?

How many indigenous towns or villages exist?

INEGI figures show that, in over 13,000 localities, more than 70% of the population speaks an indigenous language. Most of these localities are small rural settlements with fewer than 500 inhabitants. These settlements are often highly marginalized, with high levels of poverty.

Speaking an Indian language is usually a disadvantage.

Speakers of indigenous languages fall way below the Mexican average on almost any socio-economic indicator. For instance, almost 33% of indigenous-speakers are illiterate, compared to a national rate of 9.5%. Females are particularly disadvantaged – indigenous females stay in school a full year less than their male counterparts, and for only half the time that the average non-indigenous female does. Even today, almost 5% of indigenous infants die before reaching their first birthday. A third of indigenous houses lack electricity; more than half do not have piped water.

Where do the indigenous people live?

More than 92% of the indigenous population lives in central and southern Mexico. With the notable exception of the 100,000+ Tarahumara Indians who live in the remote Copper Canyon region of Chihuahua, other indigenous groups in northern Mexico have relatively small populations.

The reason is largely historical. The major pre-Columbian civilizations in Mexico – Maya, Aztec, Zapotec, etc – developed in central or southern Mexico. The north always had fewer indigenous people. The disparity in numbers between north and south was heightened in early colonial times, as Spain expanded its territorial interests in New Spain along two major axes of economic development – the Mexico City-Veracruz corridor (the major trade route linking the capital to the port and Europe) and the Mexico City-Zacatecas corridor (the major route linking the capital to valuable agricultural and mining areas). It is no coincidence that indigenous languages and customs first died out along these corridors, as the indigenous people were forced to become assimilated into the developing dominant culture.

Indigenous peoples and languages did much better in the south. At last count, Oaxaca has over one million indigenous speakers representing more than a third of the state’s population. The state’s largest indigenous linguistic groups are the Zapotec, Mixtec, Mazatec, Chinantec, and Mixe. Oaxaca’s ethnic diversity is celebrated in the annual Guelaguetza festival, normally held in July.

Chiapas has almost as many indigenous speakers as Oaxaca. The largest indigenous groups in Chiapas are the Tzotzil, Tzeltal and Chol. One numerically-small Chiapas group is the Mam. Its recent history is an interesting study in how an indigenous group can re-invent itself in order to survive in the modern world.

The Mam of Chiapas: Organic farming and regaining a cultural identity 1

The Mexican Mam (there are also Guatemalan Mam) first settled in Chiapas in the late nineteenth century, mainly in the deforested mountains of the eastern part of the state. They had virtually disappeared from view as a cultural group by 1970, having lost most of their traditional customs. Today, the 8,000 or so Mam, living close to the Guatemala border, have shown that it is possible for some indigenous groups to re-invent themselves, to secure a stronger foothold in the modern world.

Mexican policies from 1935-1950 towards Indian groups were focused on achieving acculturation, so that the groups would gradually assume a mestizo identity. It was widely held at the time that otherwise such isolated groups would inevitably be condemned to perpetual extreme poverty. To the Mam, this period is known as the “burning of the clothes”. Almost all of them lost their language, traditional dress, and methods of subsistence, and even their religion, in the process. Indeed, for a time, the term Mam never appeared in any government documents.

From 1950-1970, the Mexican government opted for a modernization approach, building roads (including the Pan-American highway) and attempting to upgrade agricultural techniques. The mainstay of the regional economy is coffee. During this period, most Mam were peasant farmers, subsisting on corn and potatoes, gaining a meager income by working, at least seasonally, on coffee plantations. Working conditions were deplorable, likened in one report to “concentration camps”. Plantation owners forced many into indebtedness. The Mam refer to this period as the time of the “purple disease”: onchocercosis, spread by the so-called coffee mosquito. Untreated, it leads to depigmentation, turning the skin purple, skin lesions and blindness. Reaching epidemic proportions, it devastated the Mam peasants who had no access to adequate medical services.

After 1970, the Mam gradually re-found themselves, as official policy was to foment a multicultural nation. Some, especially many who had become Jehovah’s Witnesses, migrated northwards forming several small colonies, promoted by the government, in the Lacandon tropical rainforest on the border with Guatemala. Others, spurred on by Catholic clergy influenced by liberation theology, began agro-ecological initiatives.

For instance, one 1900-member cooperative, ISMAM (Indigenous People of the Motozintla Sierra Madre), specialized in the production of organic coffee. ISMAM’s agro-ecological initiatives benefited from the advice of the community’s elders and rescued many former sound agricultural practices, such as planting corn and beans alongside the coffee bushes to avoid the degradation that can result from monoculture. It halted the application of agrochemicals, and studied methods of organic agriculture and land restoration. Its coffee, adroitly marketed, commands premium prices, double those of regular coffee sold on the New York market. The Mam have effectively taken advantage of modern technology, from phones to e-mail, to overcome their isolation, and compete on their own terms, developing export markets in many European nations, as well as the U.S. and Japan.

At the same time, the Mam have re-invented their cultural identity and helped revive the language and traditional forms of dance. They have also rewritten their past. The revisionist version is that they always had the utmost respect for nature and had always lived in harmony with the environment. In reality, as historical geographers have demonstrated, this was not always the case. Whatever the historical reality, the defense of the earth, nature and their culture is now central to the Mam.

1 Based on R. Aída Hernández Castillo. Histories and Stories from Chiapas. Border Identities in Southern Mexico. University of Texas Press. 2001. 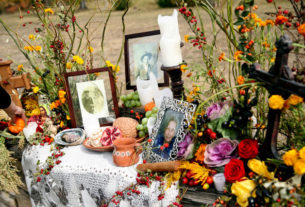