Tijuana is the pits. Mexico’s border towns are all the pits. Normally, I just grab the bus from the airport, and go directly to Los Angeles (also, some would say, the pits), but in May of this year there we were in a night club called Perro Azul (the blue dog), a high-tech bistro in a funky fake-adobe entertainment-plex called Pueblo Amigo (friendship village) very near the border, enduring a lot of smoke and an audience noise level approaching deafening, waiting for the (very late) featured entertainment to show. Not my favorite thing to do, in not my favorite atmosphere, in not my favorite town. Aside from maybe Muddy Waters, Willy Murphy or Prudence Johnson, I’d only do it for Lila Downs.

Being from Minneapolis, and living in Oaxaca city, Lila Downs is a home-town gal to me. Her father, Allen Downs (I knew him slightly), used to teach at the U of MN and met Lila’s mom, Anita, when he came to Mexico to do a film project. He stayed. When she was 18, her mother sent her to Minneapolis to take advantage of a survivor’s scholarship (her father had died two years earlier), and she studied opera and anthropology, and hung around the West Bank student quarter and entertainment district. Even though we were there at the same time, we never met, but her roots in Minneapolis are deep and lasting, as are mine. Having grown up using both languages, her accent and her cultural understanding are totally bilingual.

When she returned to her native village of Tlaxiaco (actually a regional market town of some importance, though not large like Oaxaca city) in the northwest of Oaxaca state, Lila went to work on a “dig”, getting into anthropology, her second love. During the process, she began to put music to an ancient Mixtec codice that was discovered during that period. Some of the songs she wrote appear on her latest album, of which more later.

I first met Lila shortly after I moved to Oaxaca, in 1994. She and her new beau, Paul Cohen, who was to become her co-arranger, keyboard player and saxophonist (when they met, she had her own folk group, and he played in a salsa band), had formed a group which played at a local nightclub, and soon released a cassette tape called Ofrendas (offerings), a rough but pleasant compendium of Mexican and Latin songs which didn’t do enough to showcase the incredibly vibrant and sophisticated treatment of which she was capable; and which didn’t include any of the U.S.-jazz content of their later shows. Diana had known Paul for a couple of years, having been neighbors in the same apartment building.

Oaxaca city is in many ways like Minneapolis: a place with a surprising breadth and depth of fine performing and composing artists which offers little opportunity for fame or fortune. For that,they must travel to Los Angeles, New York and other commercial centers. In Mexico, you go to Mexico City, the center of the Mexican universe. In exchange for enduring dangerous pollution levels, runaway crime, bad water and incredible traffic jams, it is possible to make a good living and get major recognition, in Mexico City. After a few years of building a rep here in Oaxaca, and developing a world class musical sophistication and a voice of infinite expression, Lila and Paul moved their act to the Capital, recorded a CD, “La Sandunga” (the Sandunga is both a song and a form of song, originating in Oaxaca’s southern Isthmus of Tehuantepéc), started gigging in the fashionable Coyoacan district, and set to work recording a second CD, “Yutu Tata” (“tree of life” in Mixtec).

We (Diana has a summer place in California) were on our annual pilgrimage north, and we had not heard Lila for a few months, since her last visit to Oaxaca, a sold-out concert at the turn-of-the-century Macedonio Alcala Opera House, to benefit the local Casa de Mujer (Women’s House). We weren’t about to miss the chance to see Lila and Paul, and to pick up a copy of “Yutu Tata”, which had just come off the presses. What we heard – and what you will hear when you buy it – was a singer who at 31 rivals the best in the world, backed by a band of fine musicians using arrangements that will knock your socks off. Newly added, is a concert harp played in fine jazz fashion, which brings another voice to each cut on which it appears.

Anyway, there we were, drinking vino tinto to cut the smoke we were swallowing, and waiting for the star to appear. We had been seated with another couple at a table the size of a postage stamp. They were transplants from Veracruz, come north for the work. They had been listening to “Sandunga” for months, and were beside themselves at the opportunity to hear Lila live. When we explained to them how and why we happened to be there, we absolutely could not buy another drink. It turned out that she had lived for several years in Oaxaca, and so another commonality was reached. When the show was over, we exchanged business cards, abrazos, and went our separate ways, they to their condo and we to our hotel.

Months later, Lila came back to Oaxaca on a tour sponsored by the state and national Casa de Cultura (cultural ministry), and gave a fine performance at the much larger Alvaro Carillo auditorium. As a salute to all her old fans from the jazz singing days, she added a rendition of “Smoke Gets In Your Eyes” to her otherwise all Spanish / Mixtec / Zapotec program. My eyes started to water, just like they did in TJ, but there is no smoking in the Alvaro Carillo. Must have been a Pavlovian response, huh? 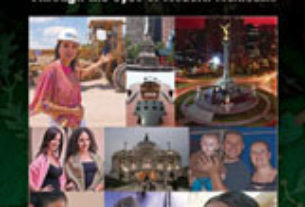