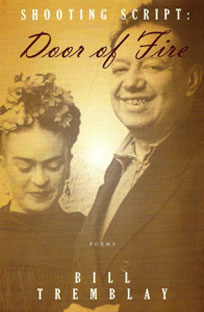 Decades after their deaths, Frida Kahlo and Diego Rivera continue to fascinate us, compelling us to still pay attention to them, through works like Frida: A Biography, by Hayden Herrera (1983); or, derived from Herrera’s book, Frida (2002) — starring look-a-like Salma Hayek — a movie that should have won a few Academy Awards; or Frida (2002) by Barbara Mujica… which presents Frida through the eyes of her jealous sister Christina; or very recently The Lacuna, by Barbara Kingsolver, about a writer who spends much of his younger life as part of the household of Diego Rivera and Frida Kahlo, during tumultuous times.

Bill Tremblay is the author of several collections of poems, including a favorite of mine, Duhamel (1986), which is a sequence of poems about a hero Tremblay created.

It is evening when the camera first pans down a “sky/the color of hammered copper” to the terrace where sit “Diego, in 20 gallon/white Stetson, Frida in denim workshirt….” Around them “workers brick up holes,/turn the hacienda to a fortress to give their guest/the exile from the assassins everyone knows are coming.” The workers are “beating the Blue House to death.

“Frida “raises her head to ask: — Why clean house for a dead man?”

The “dead man” that is coming is Leon Trotsky, the rightful heir to Lenin’s Russia, now usurped by the more savvy and much stronger Stalin (a name he adopted from the Russian word for steel).

The camera shifts, to the porthole of a Norwegian steamer, where “Leon watches morning fog rise above Tampico.” Leon expects Stalin’s assassins will “finish us on the docks.” Instead “a native queen,” Frida, “…steps forward/in her blue Tehuana dress” to welcome Leon and his wife Natalia, “still buttoning,” to the New World. Leon is not prepared for Frida. “Her youthful eyes gleam obsidian, their depths/rock him like a tugboat bumping the ship.”

Diego, back in his studio, offers champagne to the striking Paulette Goddard (a major star in the ’30s and ’40s). Let’s listen in on some of the dialogue: Diego asks:

—How is Mexico treating you?
—At the bullfights this matador dedicated his victory to me.
Then some jerk said the bull-fighter was an amateur.
I said, ‘Maybe, but the bull’s a professional.’
He settles Paulette down on pillows.
She looks, from that height, at his zipper: — Now what?

Shortly after Trotsky and Natalia settle into the household of Diego and Frida, the intellectual (and inexperienced) Leon, initially titillated, now becomes obsessed with the fascinating and bold (and much more experienced) Frida: “His eyes/focus on Frida holding a Taoist cue-ball,/staring out to a future Leon imagines as/him….”

Together, Diego and Frida and Trotsky and Natalia climb the Pyramid of the Sun. At the top, they gaze down in awe, except for Natalia who “sneers with the blasé of a tired/Parisian cab-driver.” Diego tells Trotsky he sees him as the Sphinx. Trotsky smiles, “I am a riddle.” “Frida leans into him,/he suns himself in her gaze,/her warmth melting his Ukrainian ice.”

Frida, who is eager to feel fully confirmed as a revolutionist, is ardent to consummate her relationship with the man who, but for a political injustice, would be the leader of contemporary Russia and of world communism.

Let’s look at the following scene in detail. In the studio of the Blue House, the camera first moves to Leon, looking at “a painting of a woman lying on a brass bed” and then to Frida who “picks up a rose made from a tin can with shears….” Frida leans on Leon who is anxious to help her down the stairs and to her bed, “the four-poster with its white canopy/on which a doll resembling her sleeping self is perched.”

Frida sits on the chenille bedspread as Leon studies a painting on the arched ceiling… of “Moses holding a staff over the waters, with his third eye open.” Frida, intent on re-directing his attention, compliments him. Look at the mastery with which Tremblay now develops the latent eroticism between Frida and Leon that up to this point has left us longing for something more. Let’s move in close with the camera:

—You are a flame that gives hope to the poor.
He laughs: — ah, so that’s how you see me.
Leon takes a red papier maché goat mask from the wall.
—Careful. He who dons the mask becomes the god.
—I know, and then is killed, a human sacrifice…
—If he who wears the mask is the god, there is no human sacrifice…
Through the mask he sees Frida unbuttoning her blouse,
unfastening her body-cast with its painted
Corinthian column, cracked in six places.

It’s amazing you can walk at all…

—Please, no pity. I’m not sick, I’m broken.
but I’m happy to be alive as long as I can paint.
She holds up, examines, her hands: Can you know my longings,
you, who’ve already made history?
—Are you going to take a siesta?
—Not alone.

* * * * *
Frida loosens his tie, unbuttons his collar, and peels off his coat:
—What do you need from me?
Frida lies back on her pillows, softly:
—I need a new fire, a vortex, a… Leon kisses her throat:
&mdashI need someone to love me, not this name I stole from a Siberian prison warden…
With you, I could be a man like other men…
—I hope you won’t be. With Diego, making love is like
being rolled over by the entire Gulf of Mexico…

As they make love for the first time,

She kisses, bites, his lower lip. Leon winces, his blood
stains his tongue… How do gods make love,
except with a wounding kiss? In every love
there’s a victim, Leon… I am Diego’s… Natalia is yours…
You are mine…

But others are preparing to make Leon a victim as well. The Russian propaganda machine has successfully vilified him to much of the world, has re-cast him as evil. Even as he left the ship to set foot on Mexican soil for the first time, he saw, in the crowd of supporters, a placard raised high: “Go Home Traitor.” The relentless Russian police already have rooted out his comrades and killed them and soon will find his son.

But Leon is tired. He tells Diego he would like to have a dozen white rabbits to care for. Now he thinks less about revolutionary ideals and he thinks more about Frida, almost thirty years younger. He writes her a love letter:

“Before me lies the bright green strip of grass beneath your wall, the clear blue sky above, and sunlight everywhere. Life is beautiful. Let the next generation cleanse it of evil.”

Of course we know this particular story, told to us now in Shooting Script: Door of Fire, must move toward its inexorable and tragic conclusion, one that causes Diego to reflect, “Whatever history says will be a shallow lie.”

Shooting Script: Door of Fire, is one of those (many) fine books that most reviewers passed by. I found the book last September in a little store in Colorado, where I suspect it had been sitting on a dusty shelf far too long. But suddenly, as I also almost passed it by, it leaped off the shelf and insisted I take it to lunch. Two fascinating hours later I decided to take it back with me to Mexico, where it somehow belongs.