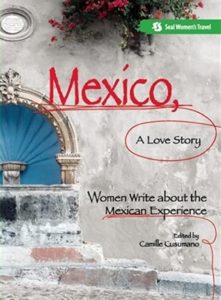 Mexico is a country infused with goddess energy. When you’re in her arms, you want to stay there, cradled in her warm, moist smells, re-charged by her underbelly of pulsating earth energy, and sustained by a wisdom born of a history filled with extraordinary achievements and major defeats.

When I first went down in 1967, it was just a trip – a little time spent in a different culture with the vague idea of bringing back some creative ideas for my art students in New York City, many of them of Hispanic background. I sublet my apartment and headed south, sure of my return to a fairly interesting job that coming September.

But I couldn’t leave. I remained in Mexico for seven years and returned many years later with the idea of never leaving.

Reading Mexico, A Love Story, an anthology of short stories written by women, I was reminded of how many subtle and different ways Mexico can enter your soul, satisfy your longings, and fill your humanity. Some of the writers never left. Others left only to return at least one more time. Others never returned but never let go either. Each of their stories brought a particular sensibility to knowing Mexico, as each and every one had been touched by her goddess energy in different and subtle ways. With each story, there is an under story, a story that can’t be expressed but must be picked up between the lines.

The collection of twenty-two stories is edited by Camille Cusumano who also has a story in the book, one with an undercurrent of danger, an element of Mexican life that is always present.

Her selection is excellent for its diversity and yet cohesiveness. It’s more than the theme that holds the stories together. There’s a unifying field created by the underlying wholeness of the culture. The “elephant” is always there. Each writer touches another aspect of the whole – a leg, a tail, a trunk. Each tells the story from her perspective. They’re all different, but it’s still the elephant.

I started the book with my own stories and memories about Mexico. I had resistance. I read the first few stories and felt I just couldn’t get into it. But as I continued to read, I gradually, almost imperceptibly became immersed in each and every story. Though each story was different, each one was my story.

The stories are honest and raw. They hide nothing. They talk of the beauty, the machismo, the poverty, the humanity, the richness, and the intense spiritual nature of a people, the origin of which is rooted into the soil beneath their feet.

The ages of the women who tell the stories run from teenager to senior. They cover the country from the Yucatan to Tijuana. They talk of birth and death, and love and loss. As individual stories, they are fragments. As a group of stories, they make a very fine tapestry.

Two quotes brought Mexico home to me. One was from Sondra Ross’s “One More Baby.” At one point she writes, “Mexicans live with an intimate knowledge of spirituality.” This defines the Mexican people. I believe this knowledge comes from their very connectedness with the earth which goes beyond the dictates of the church and is big enough to encompass it and strong enough to make it serve their bidding. There is an enjoyable story by Katherine Hatch who gives voice to this aspect of the culture in “Los Padres of Paraiso.”

A second quote that went straight to my heart was from Mary Ellen Sanger’s “A Grammar of Place.” “I got over leaving Mexico,” she writes, “but I may not get over living without her.” Yes, I know.

Mexico, A Love Story is a good read for anyone who knows Mexico, anyone who’d like to know it, and anyone planning to come. The stories are light, but the total weight of what they convey has a surprising cumulative depth.

The book was published this year by Seal Press. It’s a nice piece of travel literature, good plane reading if you’re planning on flying down. The cost is US $15.95, but the insights are priceless.

Published or Updated on: May 2, 2008 by Rita Pomade © 2008
Share This:
Tagged book-reviews culture-customs Rita Pomade

Poking around the pueblos of Oaxaca: Vista Hermosa