We, who grew up in big families, fought and played together, blamed the other when caught in mischievous acts by our parents, even sometimes took the blame. We shared chores, rooms, clothes, food, happy times, sad times, parents and each other. We grew older and some of us sisters shared recipes, baby clothes, baby-sitting, car-pooling, family outings; just about every thing.

Some of us scattered around the globe to live, but we never lost touch with each other. I know sisters who call each other every day from New York to Seattle, from Vancouver to Montreal or from the next town over. Conversations range from health, welfare, mood swings and family matters, down to, “What are you fixing for dinner?”

Today I was reminded that these relationships exist all over the world, and they’re just as important to others as they are to me. Blanca and Maria are sisters. Blanca owns and operates a souvenir stand upstairs from the public market, just off the main plaza in Talpa de Allende. She has a young daughter. Maria owns and operates a beauty shop, and is expecting her first child.

Both girls share a love for pretty clothes. Blanca related how she came to learn to sew. She is five years older than Maria and, as in so many cultures in this world, Maria was Blanca’s toy. She combed her hair and tied it with bright ribbons and played “dress up.” Money was not abundant in this household, but Blanca wanted pretty clothes for her doll. She would look in her mother’s closet, and if she found a fabric she thought would look good, she would swipe it, cut it up into pieces and make a new dress for her muñeca. All this was done with just a needle and thread. There was no sewing machine. She says, “They didn’t fall apart either.”

Of course there was no way to keep this big sister’s talents a secret. Once the wise mother calmed down after seeing her own clothes destroyed, she decided to encourage her daughter. She chose the dresses for Blanca to use for new clothes for Maria.

These two sisters visit with each other every day, either in person or by telephone. They discuss mama’s cataracts, daddy’s hearing loss, next week’s family get-together, pregnancy notes, new dresses, and Blanca says as she leaves the beauty shop, “I think I’ll fix ribs and squash for lunch today.”

Theopa and Francesca are sisters, but a bit older than Blanca and Maria. They have grown, married children and, as is common in this society, two or three stragglers still in school. Both of their husbands are brick masons, who begin their day at 7:00 in the morning. This gives these women an opportunity for an early morning sister-moment. I often meet them while out on my river-road walk. I will be just starting out. They’ll have finished their exercise, heading home to get the kids off to school. This early start gives them the chance to discuss Pablo’s missing teeth, Martita’s growing body and what they’ll be preparing to put in those blue enamel pails to take to their husbands’ job site for their breakfast at 10 a.m.

Margarita and Patricia live across the street from each other. Margarita is a retired school teacher, and Patricia’s husband is a medical doctor who owns a drug store. The doctor is never around, so Patricia manages the drugstore. She and sister, Margarita, spent many years along the California-Mexico border where it seems they both studied theatrical makeup. Don’t look for any new prescription drug in that drugstore, but if you want blue eye-shadow, green fingernail polish, maroon hair color, name it – you’ll find it.

La Prieta and La Guera also live on the same street. Although the two girls are in their late sixties, their mama still rules them with that proverbial iron fist. She lives a few weeks with La Guera and then moves over to La Prieta’s house. She is the first one up early in the morning to prepare juice for the family, and is very active in the daily household affairs. Both sisters giggle over Mama’s antics, and share their concerns for her health.

Happy Mothers’ Day. That’s how we get sisters.

Published or Updated on: May 1, 2007 by Jenny McGill © 2007
Share This:
Tagged Jalisco Jenny McGill perspectives 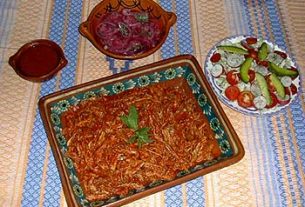 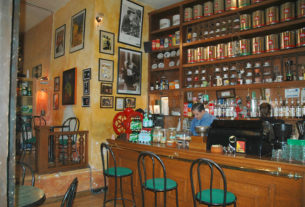 Exvotos To St. Francis Of Assisi