Candelaria is back, with her special logic, folk wisdom and Mexican home-style recipes in the bilingual ‘Las Recetas de Candelaria,’ or ‘Candelaria’s Cookbook.’

Readers of Dane Chandos’ charming ‘Village in the Sun’, about life around Lake Chapala in the ‘40s, will recall Candelaria as the cook who ‘could carry in her head scores and scores of recipes.’ Two score and ten are collected here, compiled by Moreen (Binkie) Chater of the lakeside village of San Antonio Tlayacapan.

Chater reports the manuscript was found after Chandos’ death in his bottom desk drawer, ‘faintly typed and badly eaten by mice.’

Many of the recipes carry Candelaria’s titles: The Eggs of a Señora who Lived in Tuxcueca but Died, Rice as the Señora had it in Spain (which some of us might call paella), Roll of Meat as I Made it the Day You did not Come for Lunch. Others are familiar and traditional: Seviche, Capirotada, Chongos Zamoranos, rompope. With one exception, they’re business-like and easy to follow. The exception? None of them give the number of servings, although experienced cooks will be able to make a good guess. Each carries an anecdote which in some way illuminates life in Mexico.

Here’s the story with ‘The Recipe of that Cook of the Gringo Señor Which I Have Improved’ (Codfish in Egg Sauce):

‘And if the little ducks had put enough eggs,’ said Candelaria, ‘you would have seen how much better this would have come out to me with little eggs of duck.’

Chater and her husband Leslie, natives of England, were long-time friends of Peter Lilley, the Englishman behind the ‘Dane Chandos’ pseudonym, who lived in Mexico for 40 years and died in the early 1970s.

Alfred Jimenez Montano, an architect and painter who had an art supply store in Ajijic, painted the colorful cover and did the black and white drawings which illustrate the spirited text.

The book was produced by Ediciones de la Noche of Guadalajara, and translated by Rosa Maria Casas, a writer who has worked with the BBC in London and the Mexican Foreign Service in Washington, D.C., and Athens.

‘Candelaria’s Cookbook’ is available through Sombrero Books and the Lake Chapala Society of Ajijic.

Author’s note: This article was published in 1999. While the basic subject is still valid. The specific details – people, places, addresses etc. are likely to have changed 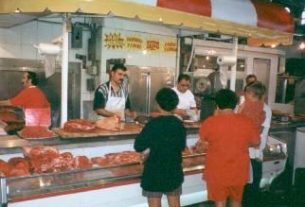