There’s something obscene about spending so much money at Christmastime. It’s not like we’re the Three Wise Men hiking across the desert to gift the baby Jesus. I don’t even know what frankincense is, let alone myrrh. So let’s get down to the most important symbol of all: the Christmas tree itself.

One long-ago year, my Dad was out of work, much as fathers are today, but he was determined we’d have a tree just the same. All four of us, Dad, Mom, my sister and I, went to McNally’s, the local man who sold trees just once a year. We couldn’t afford any of his trees, except the worst looking thing on the entire lot. To call it “scrawny” would’ve been a compliment. It had a skinny trunk an 8-year-old could put her thumb and forefinger completely around and it was not blessed with more than half a dozen nearly bald branches. Besides all that, it tilted like the Tower of Pisa. My sister and I looked at each other in teary dismay.

Undaunted, Dad fished a dime out of his pocket and bought it, and for another nickel, Mr. McNally sold him some loose boughs people used for making wreaths for their doors. One good thing about that tree was that it was the lightest one to carry home. Upon arrival, Dad started to use his imagination, like a person would do in getting a makeover. He found the spot where the tree had started to tilt, and sawed the trunk off just above that spot. When he finished, the tree was much shorter, but at least it was straight. He then drilled holes all over the rest of the trunk, filed down the woody end of the boughs into points, and pushed them into the holes. Mom looked on approvingly, and my sister and I finally began to see Dad’s master plan go into effect. The crookedest tree on McNally’s lot was beginning to look like a real Christmas tree after all.

We couldn’t use tree lights, for the wiring would be too much weight for the rough-hewn branches to bear, so Mom had us get the special box of burnished ornaments from the attic, the same ornaments our paternal grandmother had brought when she emigrated from Germany, and charged us with locating the smallest, lightest ones. She gently and very carefully hung these treasures from the homemade boughs, and we helped her finish the decorating job with several boxes of tinsel, which reflected the light from a nearby floor lamp. Due to the shortened height of our special tree that year, we didn’t need to be hoisted up on Dad’s shoulders to place the traditional angel at the very top. We just stood on tippy toes.

Each year, New York’s Rockefeller Center features a magnificent tree to be seen in person or on television. It’s huge, gloriously resplendent with color, and flashing lights.

But for us on a penniless Christmas Eve, that short, scraggy, slanted little tree was transformed before our very eyes into a beautiful, straight, and shining example of what Christmas is really all about.

The moral of this story is that even though you don’t trek through starry nights to get to Baby Jesus, you can show your love by using the gifts God gave you: creativity, imagination, and a set of Black & Decker. 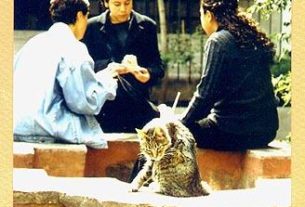