In writing of the Persian Wars, Herodotus, our earliest Greek historian of note, declared that his purpose in writing of the attempts by the Persian kings Darius and Xerxes to invade Greece was to ensure that the great deeds – whether of Greeks or barbarians – should not be forgotten in ages to come. He also asked and attempted to answer the main question: why did they fight each other? The question is still relevant today. But sometimes the supposed causes are not what we might expect. Let us look at two such unlikely parallel examples of warfare, one in ancient Asia Minor, the other in northern Yucatan, Mexico, long before the arrival of the Spaniards. 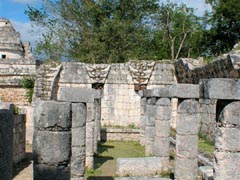 The early history of Yucatan is one of migrations and constant rivalry among independent city-states for dominance. One such conflict involving the cities of Mayapan, Izamal, and Chichen Itza has been aptly described by R. Roys in his 1933 edition of the Chilam Balam of Chumayel as the “Trojan War of Yucatan.” The main source of the story is the account given by Father Fuensalida, who visited the Itza Maya around Lake Peten in 1618 for the purpose of converting the Indians to Christianity. At that time the Itza Maya gave him an account of their migration to the Peten from Chichen Itza.

On a certain date (Katun 8 Ahau in the Mesoamerican calendar, late 12th century) one of the rulers at Chichen Itza apparently stole the bride of another more powerful chieftain during the wedding festivities. The Itza responsible abandoned their city in fear of the consequences and retired to the Lake Peten area, where Father Fuensalida found them.

A more complete story can be reconstructed from documentary and archaeological evidence. Archaeology, for example, helps to establish historical links between the physical evidence of stone monuments and other artifacts and the documentary evidence in the Books of Chilam Balam. In the Chilam Balam of Mani we read that an unspecified person “sinned” against Ah Ulil, ruler of Izamal (“…against the wife of his fellow-ruler”). Another powerful chieftain, Hunac Ceel by name, along with a number of his Mexican mercenaries, avenged the wrong by attacking and sacking Chichen Itza.

Throughout the Maya chronicles we find mysterious references to the “conspiracy” or “plot” of a certain Hunac Ceel. Roys concluded that the offended ruler in question must have been Ah Ulil, ruler of Izamal, whose wife was stolen. At first it seems strange that it was Hunac Ceel and his Mexican captains (all with Nahuatl/Aztec names in the Chronicle) who avenged the wrong. But, as we have seen in recent world events, political ambition knows no bounds.

The famous/infamous cenote at Chichen Itza, the “Well of Sacrifice,” plays an important role in the drama. Our earliest and fullest description of the cenote and the sacrificial rites associated with it comes from the equally famous/infamous Bishop Landa in the 16th century. If you have ever stood near the rim of this deep depression in the earth with its walls of some seventy feet down to the waterline and about one hundred and seventy feet across you may have felt some of the awe and terror the sacred well must have inspired in those involved in the sacrificial rites practiced here.

Bishop Landa and other early Spanish chroniclers have also left us descriptions of the human sacrifices that took place at the sacred well. Certain persons, reportedly young women by preference, were thrown into the cenote in order to prophecy for the rulers. The basic purpose of the sacrificial ritual seems to have been to invoke the rain god to ensure good crops. If the person survived the plunge into the greenish water below, he or she was expected to prophecy for the lords. It was a serious problem if no one survived the ordeal to give a prophecy. One enterprising young woman is said to have saved herself by declaring that if she were thrown into the cenote she would pray to the gods to send no maize that year, nothing at all. The priests quickly released her. However, on this particular occasion (the precise date in the Chronicle is somewhat in doubt) apparently no one survived. Hunac Ceel, who was in attendance at the ritual, took the opportunity to leap voluntarily into the depths of the cenote. He emerged shortly with a prophecy declaring himself the head-chief. The roles were reversed. Formerly Ah Mex Cuc had been the ruler and Hunac Ceel his representative. Now Hunac Ceel, the former representative, became the high ruler.

The story does not end here. From the Chumayel, which contains the main description of Hunac Ceel’s exploit at the cenote, and other Maya chronicles we can piece together a few more parts of the story. Again the archaeological evidence supports the account of the sack of Chichen Itza as given in the Maya chronicles, for the chronological sequence parallels the Maya accounts. It goes something like this. In A.D.1224, Hunac Ceel, ruler of Mayapan conquered Chichen Itza. Although the Itza had been driven out about 1221, they apparently later joined Hunac Ceel and his Mexican mercenaries against Chichen. From this point on, Mayapan’s dominance in the north begins. Under the Cocoms, descendants of Hunac Ceel, Mayapan ruled for several centuries, until its final collapse and destruction in A.D. 1441.

We now return to the “treachery” of Hunac Ceel, which involved Mayapan, Chichen Itza and Izamal. A search of the Maya chronicles reveals another reason for the war, apart from economic or political gain. It seems that at the wedding festivities of the lord of Izamal, the cunning and devious Hunac Ceel used a love potion made from the plumeria flower to inflame Chib-xac-chib, then ruler of Chichen with passion for the bride, whom he carried off by force. The stage was set for war. Izamal was already angry with the people of Chichen for sacrificing its young people to their serpent-god. As Roys suggested, it was most likely Ah Ulil, ruler of Izamal, who was the offended bridegroom. The frequent references to the “treachery” or “plot” of Hunac Ceel indicate that he may have engineered the whole event as an excuse for attacking Chichen, much like president Bush’s “preemptive” strike against Iraq.

Lest this interpretation seem too fanciful, let us turn to the original Trojan War. For those of you who have forgotten your Classics, let me refresh your memory. It all started with the golden apple of Discord. Zeus decided that there were too many people in the world, so he sent Discord to throw a golden apple into the wedding assembly of King Peleus and the sea nymph Thetis, attended by all the gods, marked “for the fairest.” The three chief goddesses, Hera, Aphrodite, and Athena each claimed the prize. Paris decided in favour of Aphrodite in return for her promise of the most beautiful woman in the world. Unfortunately for the world the woman, Helen, was already married to King Menelaus. Nevertheless, Paris abducted Helen, along with much treasure belonging to her husband, who just happened to be away in Crete at the time. Now previously Helen’s father, King Tyndareus, had extracted a promise from her numerous suitors that they would come to Menelaus’s aid if any wrong were done to him. Accordingly, all the chieftains of Greece, led by King Agamemnon, most powerful of all, assembled to win her back. The Iliad tells the story of the tenth and final year of the Trojan War between the Greeks and the people of Ilium (Troy).

Both “Trojan Wars” were caused initially by the acts or misdeeds of one individual. In the Greek version, Paris was tempted by Aphrodite but it was he who started the trouble when he abducted Menelaus’s wife. In the Maya version, Hunac Ceel was not after a woman for himself, but he used a woman to provoke jealousy and provide himself with an excuse for aggression. Golden apples, magic love potions, weapons of mass destruction, the pretext doesn’t really matter, the result is always the same. The main difference between the Greek version and the Maya version is that for the former we have the Iliad, a coherent epic narrative backed up by archaeology, mythology, linguistics, and other evidence; whereas the latter must be reconstructed from scattered references in the Maya chronicles and whatever documentary and archaeological evidence survived the Spanish cultural holocaust. However, in the Maya texts we also have precise dates of events based on the accurate Mesoamerican calendrical system.

Historical fact or poetic fancy? Or a little of both? In both the Greek and the Maya example, myth and history are intermingled, but neither the ancient Greeks nor the ancient Maya would have felt any serious contradictions. The problem lies not so much with the interpretation of events in terms of the cultural context in which people actually experience these events, but with later generations of researchers and scholars who try to interpret these experiences in terms of their own frame of reference, which may or may not be appropriate. This means we should not dismiss out of hand “myth” or “legend” in a historical context simply because it does not fit our notion of historical writing. Evidence from Homeric epic and other epic traditions around the world indicates an underlying basis of historical fact in epic or heroic poems and sagas. For example, the Catalogue of the Ships ( Iliad, Book two) is based on accurate geographical and political knowledge of Mycenaean times many centuries before the composition of the Iliad. The Old French epic Song of Roland commemorates the historical battle of Roncevaux in A.D. 778, the struggle between Christians and Muslims, and the campaigns of Charlemagne. The Indian epic Mahabharata tells of the conflict between two ruling families, the Pandavas and the Kauravas, over the possession of Hastinapura, near modern Delhi. The Quiche Maya Popol Vuh is a combination of Quiche myth and historical accounts of the migrations of the Maya. The historical account of the migration of the Aztecs from Aztlan to the founding of Mexico-Tenochtitlan can be traced through numerous Nahuatl texts of an epic or heroic type. So too the seemingly fanciful story of the magic love potion in the “Trojan War of Yucatan” may have had a basis in historical fact, although political and economic ambition obviously played an important role.

If there is any lesson to be learned from history, it is the ingenuity with which people find reasons or excuses to fight one another. If one were to take an uncharitable view of the continuing problem of warfare, one might conclude that the human animal is inherently greedy and stupid and let it go at that. However, like Herodotus, we are asking the question: why did they fight each other? The reason or pretext for going to war may range from some apparently trivial cause to a mass invasion of a country, but one thing at least is clear; those in positions of the highest power or authority are the least likely to learn anything from history.

A Woman’s Perspective On Living In Mexico