How do we know what we know (or think we know) about the ancient civilizations of Mexico and Guatemala?

A little knowledge can be a dangerous thing, especially when it comes to ancient Mexico. With a little knowledge and a vivid imagination, some popular writers on the subject even become rich and famous. The latest in this crop of imaginative fiction was recently announced in the Guadalajara Reporter. With Daniel Pinchbeck’s best-selling book The Return of Quetzalcoatl, we are once again dragged into the popular pseudoscience surrounding the mystique of the Maya Calendar. No, I haven’t read the book, nor am I likely to. While some of these pseudo-historians on ancient Mexico have done creditable research, their results are largely negated by their bizarre hypotheses and unproved assumptions. Unfortunately they write and market their work in such a way that the public is too often deceived.

I was reminded of this recently at a writer’s meeting when I read an article about Aztec warfare in which I mentioned the role of the Mesoamerican deity Tezcatlipoca as a Toltec war god. A gentleman in the audience objected on the grounds that it was Huitzilopochtli who was the Aztec war god. The gentleman added that he had a degree in Latin American studies, which, presumably, made him an authority on Mesoamerican religion. Now while it is quite true that Huitzilopochtli was the war god who led the Mexica from Aztlán to the founding of Mexico-Tenochtitlan, ancient Mexican gods had multiple personalities. Since the purpose of a critique at a writer’s meeting is to suggest improvements in the form or presentation of the writing rather than to criticize the content, I did not go on to discuss the different aspects of Tezcatlipoca or point out that one deity could even represent another deity. No wonder the gentleman was confused!

Incidentally, the term Mesoamerica refers to a number of cultural features common to certain areas of advanced civilizations in Middle America, such as extreme ritualism, an extensive pantheon of individualized deities, a hierarchically organized formal priesthood, theological and philosophical speculation, etc., etc. Middle America is a geographical term referring to the actual distribution of these cultural features.

How do we know what we know (or think we know) about the ancient civilizations of Mexico and Guatemala? Much of the information that filters down from the dry academic ivory tower arrives second or third hand, and may well be distorted by the time it reaches the ordinary non-specialist reader. This is especially true of Maya and Aztec ideology and religion. Archaeology deals with real concrete physical evidence but it is limited in that it does not tell us much about how the people who built the palaces and pyramids actually thought. The mute stones begin to speak when we have hieroglyphic or written texts to back up the archaeological evidence.

Religion permeated the lives of the ancient Maya, Aztecs and others. We shall therefore examine certain Mesoamerican religious concepts. Not only is religion of great importance in studies of ancient Mexico, but it also provides a clue to the understanding of modern Mexico.

Lowland Maya religion covers Yucatan and the Maya lowlands, including the Lacandon Maya of the Chiapas area. Our main sources include: archaeological monuments and Classical murals, which must be used with caution; the four surviving Maya codices (Dresden, Madrid, Paris, Grolier); Yucatecan Maya documents of the Colonial Period, such as the Books of Chilam Balam (Chumayel, Tizimin, Mani, etc.) and the divinatory and medical Ritual of the Bacabs; Landa’s Relación de las Cosas de Yucatán; recent ethnological investigations in the Maya Highlands and Lowlands; and comparative data on religious practices and beliefs of non-Maya neighbours. Religious beliefs of the Lacandon Maya of Chiapas are of particular importance here.

Highland Maya religion covers Guatemala and adjacent areas. Our main source of information on the Quiche Maya pantheon and Mesoamerican religion in general is the Popol Vuh. Other important sources are the Title of the Lords of Totonicapan and the Annals of the Cakchiquels.

Mixtec religion is represented in the pre-Hispanic pictorial and hieroglyphic documents from the Oaxaca area. Archaeological sites, such as Mitla, also provide further evidence of religious beliefs and practices. Early documentation for other major Mesoamerican religions, such as the Tarascan and Zapotec, is scanty by comparison but not altogether lacking. Although written in Spanish, the Chronicles of Michoacan provides information on pre-Conquest Tarascan religion and a few fragments of the Zapotec religion and mythology survive in the writings of Spanish missionaries.

Most of our information about ancient Mesoamerican religions comes from late pre-Hispanic central Mexico. Major sources include: archaeology, such as the statue of Coatlicue and the Aztec Calendar Stone; pictorial manuscripts; post-Conquest native documents; and Spanish and Mestizo writers, such as Sahagún, Durán, and others. After the Spanish Conquest of Mexico, many secular and religious writers recorded Aztec beliefs and ceremonies from the few survivors of the cultural holocaust of the Spanish invasion.

The Borgia group of codices (Borgia, Cospi, Fejervary-Mayer, Laud, and Vaticanus B) is one of the major sources of information about Mesoamerican religion. The Borgia Codex itself is a pre-Conquest skin manuscript in the form of a long screenfold. Discovered around 1792 to 1797, it is a most important source for the study of central Mexican gods, ritual, divination, calendar, religions, and iconography. The main subject matter is the Tonalpohualli or Count of the Days, a 260-day sacred calendar in 28 sections. The calendar is arranged in columns of five members and runs through the twenty day names of the Maya month. Each day has a name and is accompanied by a number up to thirteen. When the count reaches thirteen the numbers start over again from number one. The result is that the twenty days multiplied by the thirteen numbers give us the 260 day count of the sacred calendar. We do not know exactly why these particular numbers were chosen, although there are theories about it.

Numerous gods and goddesses are associated with the day count and with other time periods. Each day, for example, has the name of an animal or object and a presiding deity. Thus the first day of the month would be designated One Cipactli (alligator), presided over by Tonacatecuhtli, the God of Sustenance and Lord of Procreation. The twentieth day of the month would be Seven Xochitl (flower), presided over by Xochiquetzal, the Goddess of Flowers and Love. An example of another time division is the nine hours of the night, each hour presided over by a particular deity, from Xiuhtecuhtli, the Fire God to Tlaloc, the Rain God.

It is impossible in this article to give a complete overview of the contents of the Codex Borgia. Therefore, we shall focus on Tezcatlipoca, the Toltec-Aztec deity. But in order to reconstruct a reasonably adequate picture of Tezcatlipoca we must draw on other sources besides the Borgia Codex.

The early Toltec origins of Tezcatlipoca are confirmed by archaeology. The first clear representation of this deity is on a Toltec-style sculpture from Early Post-Classic Chichen Itza (A.D.1000-1500). In the Late Post-Classic period, he appears with his characteristic smoking mirror and serpent foot. The jaguar was his animal counterpart. Tepeyollotl (Heart of the Mountain) was his jaguar aspect. In later written accounts, he was known first as Tezcatlipoca-Tezcatlanextia (Smoking Mirror-Mirror That Makes Things Appear), titles originally attributed to Ometéotl, the supreme Concept of Duality in Aztec thought. In his quadripartite form, Tezcatlipoca was one of the four sons of Ometéotl, but in later Aztec times, he appears as one of a number of deities.

In the Florentine Codex, he is an object of worship and sacrifice as in ancient times. Regarded as a true god, he was omnipresent, in the land of the dead, on earth, and in heaven. In prayers and exhortations, he was addressed by many titles, such as Titlacauan, one of the sorcerers who drove Quetzalcoatl out of Tula. All-powerful, invisible, untouchable, he was also known as the night and the wind. As Necoc Yaotl (the enemy from both sides), he brought discord among people and introduced vice, sin, and anguish. He was a double-dealing god who gave people pain, misery, affliction and plagues on the one hand and on the other bestowed prosperity, riches, wealth, heroism, valor, positions of dignity, rulership, nobility, and honour. This versatile deity has no less than 360 distinct phrases or epithets in the Florentine Codex alone.

In general, the various aspects of Tezcatlipoca are defined by the position of the sun: “In the east he is yellow or white, in the south blue (see also Huitzilopochtli), in the west red, and in the north black” (M. Jordan, Encyclopedia of Gods, New York, 1993, p. 258). The Tezcatlipoca Complex was part of what H. B. Nicholson called the Celestial Creativity-Divine Paternalism theme of pre-Hispanic religion in central Mexico. In some sources he is the supreme god of the pantheon, totally powerful, omnipotent, ever-young, and omniscient. On the other hand, his association with sorcery, darkness, night, and the jaguar expresses the pessimistic, fatalistic, later pre-Hispanic world outlook in central Mexico.

One of the most striking images of Tezcatlipoca is his aspect as Yayauhqui Tezcatlipoca, The Black Tezcatlipoca, and bearer of the twenty day signs. The day signs attached to various parts of his body and elaborate paraphernalia mark him as a cycle of time, each sign being a manifestation of his creative being. Similarly, in the Post-Conquest Codex Vaticanus, a nude man is portrayed surrounded by the twenty day signs attached to his body, possibly used in medical divination. Elsewhere in the Borgia Codex, Tezcatlipoca appears in other aspects, such as Tlatlauhqui Tezcatlipoca, the Walking Celestial Being of the South. Here he seems to lack some of his most distinctive characteristics. As a punitive judge his eyes are blindfolded. Apparently justice was just as blind back then as it is now.

Let us return to the question posed by the gentleman at the writer’s meeting. Who or what precisely was the war god that led the Aztecs from their homeland to the founding of their empire? Book Three of the Florentine Codex (The Origin of the Gods) tells of the birth and early exploits of Huitzilopochtli, the tutelary deity and war god of the Aztecs. Like Athena from the head of Zeus, Huitzilopochtli sprang fully armed from the head of his mother Coatlicue, the decapitated earth goddess so graphically represented in the stone statue of Coatlicue in the National Museum in Mexico City.

In dealing with Mesoamerican religious concepts, we must change our usual way of thinking and try to see things through the eyes of the people themselves. If we can divest ourselves of some of our own personal biases and preconceptions, we can begin to see not only the differences but also the similarities in our thought patterns. For example, if we compare the Aztec explanation of origins with that of the ancient Greeks, our spiritual and intellectual precursors, we find some striking parallels. Like Atlas who was condemned by Zeus to hold up the sky, Huitzilopochtli as the southern God of Fire is one of the four supporters of the sky. We even have a kind of Aztec Prometheus. You may remember it was the Greek Prometheus who stole fire from the gods for the benefit of the human race and was severely punished by Zeus for his actions. The Aztec Prometheus was rejuvenated by means of fire, which enabled him to ascend into the heavens as the sun, the source of human existence. Mythology is just a poetical way of describing our deepest thoughts and emotions. But that is another story. 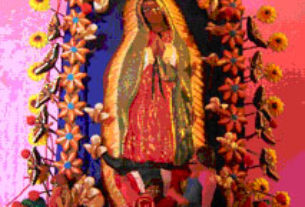