In 2015, Mexico became the North American leader in car assembly and export. 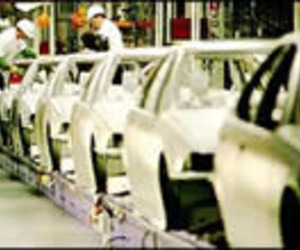 Long, long ago, Aztec and Maya chiefs, visiting Spaniards and Catholic fathers accumulated gold as a status symbol, to enhance riches or to upgrade church ambience.

There was a bowl of nuggets for the tomb, a full chest for the sailing ship and layers of gold for steeples, saintly statues, altars and plaques on church walls.

The new gold comes with four wheels. This time, workers get a share of the loot.

The Mexico auto industry is booming, a stunning development of world significance. Assembly plants that popped up all around are now expanding. Nearby are convenient parts suppliers, tool shops and even tire manufacturers.

Car makers and their supporting cast have invested or committed almost $22 billion to Mexico in just over two years. Thousands of employees are benefitting. You ought to see plant parking lots.
Here is a clue to what is going on: Carlos Lozano de la Torre, governor of Aguascalientes, has business cards printed in 10 languages. The larger stacks are in Japanese, German and English. Of course some are in Chinese.

He has translators on call.

“I only speak Spanish but when it comes to cars, I want to be ready for everybody.”

In Mexico, ‘everybody’ is Ford, General Motors, Nissan, Honda, Volkswagen, Mazda, Mercedes-Benz, BMW, Hyundai-Kia and several others that sound like Fiat and Chrysler. Toyota is little bit behind in Baja but will soon be speeding up elsewhere.

How big is the boom? The Aguascalientes governor says his state has added 44,000 jobs.
It is a logical manufacturing and shipping hub, a railroad crossing, 450 miles southwest of the Texas border, not too many trucking hours from major ports on two oceans.

Nissan has been there for a while and owns more than a fourth of the retail market in the country. It is now bigger and better, 21 million square feet of factory space. Carlos did it. His government sold the land for almost nothing to fire up the economy.

Production of the fourth-generation Nissan Sentra will hit 175,000 the first year. The plant operates 23 hours a day, 6 days a week. Some 3,000 auto jobs were created and another 9,000 emerged at supplier companies.

Daimler and Nissan are or will assemble Mercedes-Benz and Infiniti cars at a nearby site. Nissan has another major operation in Cuernavaca in Morelos.

Honda has a Jalisco assembly plant in El Salto, near Guadalajara. There is a new Honda plant near Celaya in Guanajuato. Ford is big in Hermosillo, in Sonora, and in Cuautitlan, in the state of Mexico.

Kia is building in Pesqueria, near Monterrey. BMW assembles cars in Toluca and is building in San Luis Potosi. Volkswagen has been in Puebla for ages but is expanding. Audi is probably a year away from production in San Jose Chiapa.

Just how serious is Audi about Mexico? Hundreds of Mexican workers have been in Ingolstadt, Germany learning exactly how the company builds cars.

Isaul Lopez Gutierrez, 45, a systems analyst, explains: “We have to make sure the quality is the same in Mexico as it is in Germany. Audi is obsessed with quality.”

Industry giants who live in Detroit and Tokyo have noticed something is going on in Mexico. A few have already figured it out.

Production costs are less.  A Mexico worker, on average, costs car companies $8 an hour, including wages and benefits. General Motors says Michigan labor costs $58 an hour. There the union is very aggressive.

Volkswagen figures $38 at its Tennessee factory. This is the lowest in the U.S. industry.

German auto workers cost about $52. Japan is more and going up. Car construction costs are higher in China than in Mexico.

Mexico is ahead of the game in free trade agreements, 44 countries, making it an ideal export base. Proximity to the United States is relevant. The really big market buys about two-thirds of the Mexico output. The net result is what you’d expect. Eighty percent of the cars built in Mexico are exported.

Mexican auto production has more than doubled in the past 10 years. Mexico will likely pass Brazil in output this year, on its way to No. 6 in the world. The forecast calls for a continuing rise, up another 50 percent by the early 2020s. Mexico has, indeed, struck gold.

For some reason, what is happening in the Mexican auto industry does not match what you see and hear about the drug war, kidnapping and extortion.

Ildefonso Guajardo Villarreal, Mexico’s economic minister, said government did not have to reassure auto builders that the country is livable and open for business.

Guajardo Villarreal said representatives of the big companies traveled extensively and checked conditions for themselves before adding to their investments.

The auto industry supposedly helped inspire the reform agenda which may eventually lead to sweeping changes in law and justice, energy, education and telecommunications. The motivation is money.

Compared to some, the car builders are absolute optimists. They think south of the border is good to go with an even better outlook. We’ll  see. It is their billions turning into Mexico gold.

Published or Updated on: May 23, 2015 by Marvin West © 2015
Share This:
Tagged doing-business finance-economics Marvin West