On a shelf under the glass top of our coffee table sit two singular and beloved pieces of pottery, reminders of a visit to a wildly beautiful region with a distinctive culture. They bring back vivid memories of the Sierra Mixe, a unique part of the state of Oaxaca with an ancient culinary heritage.

One of these rustic pieces is a boot-shaped clay pot, designed for traditional use in cooking beans, broths and sauces. Placed between red hot stones, and containing other hot stones inside, these pots cook the food with remarkable efficiency in the same way that has been used for centuries.

It seems logical that the more isolated a region remains, the more likely that the integrity of its food ways will be preserved. In the case of the Mixe (MEE-hay), the geography alone helps to preserve a great deal of this culinary autonomy.

Visiting some of the Mixe towns and villages — accessible only by rough, winding mountain roads, often unpaved — can seem like time travel. The Mixe name for themselves means “people who speak the mountain language,” and this use of the ancient tongue, rather than Spanish, makes this particular time travel a bit more exotic.

After a two hour drive from the city of Oaxaca, a stop at the Sunday market in Tamazulapan del Espiritu Santo (not to be confused with Santo Tomas Tamazulapan, in the far southern part of the state) yielded a variety of chiles, including the pasilla oaxaqueña, for which the Sierra region is famous. Women in the regional dress of this town, with a long, navy blue skirt, white blouse and red sash, competed for our business, selling the chiles, along with mountains of potatoes, long strips of salted, dried beef called tasajo, and a variety of tamales.

Perhaps the most characteristic dish of Tamazulapan is ma’ach, which is easy to remember because it reminds me of “mash,” which is exactly what it is — corn ground, or “mashed,” into masa and with either potatoes or beans and squash. The version with beans and squash is more traditional, because it brings together the “three sisters” of ancient Mexican cuisine, corn, beans and squash.

This was, and still is, a ritual meal of celebration of the birth of a child, and continues to be prepared before harvest time, to ward off hunger. It is made in the boot shaped cazuelas, like the one under our coffee table, which I’m sure the Mixe would consider a strange place for it.

There was also pulque, a fermented beverage made from the sap of the maguey plant. Dating back at least 1,000 years, pulque was an important element of pre-Hispanic culture. Although its exact origins are not clear, some indigenous mythology has it that pulque was discovered by the tlacuache (opossum) who dug into the maguey root with its claws, which eerily resemble human fingers.

The creature drank the fermenting juice of the plant, and became the first drunk. There are other myths concerning the origin of pulque, but the drunken possum is my favorite. He was said to set the course of rivers and, when he was staggering, the rivers became winding.

Although mescal is far more common in Oaxaca, I have seen pulque at several village markets. It is usually very fresh when offered at the markets, and is a local specialty in Tamazulapan, where a pulque festival is held every spring. There is also flavored pulque, called pulque curado, made with the addition of ground nuts or fruit.

Forty minutes further up the incredibly bumpy, winding road, in Santa Maria Tlahuitoltepec, we were met with the sight of villagers going into church carrying dried corn stalks. Entering the building, we saw that the stalks were being gently brushed over the statues of saints. A symbolic offering? A gesture of tribute? We asked a few of the villagers, but this was one instance where Spanish did not work. Either that or this was not information to be shared with outsiders. (“What happens in Tlahuitoltepec stays in Tlahuitoltepec.”)

As we made our way to the small central square in front of the church, we were approached by a group of four teenage boys, eager to communicate with visitors and to practice their Spanish, studied at the local telesecundaria — a classroom where secondary and high school students in rural communities take classes via pre-recorded programs transmitted by satellite. The kids were fun to talk with, interested in our culture, and made good translators for the market ladies perched along the curb on either side of the plaza.

Although a larger market had been held the day before, this was more like a Sunday social, although a quiet one, given the soft-spoken nature of the Mixe people. The women, some wearing lavishly embroidered blouses and ruffled skirts, in great contrast to the austere garb of Tamazulapan, sat silently, passing around a jug of the local pulque, after which it was refilled and passed around again. This seemed like an extremely mellow way to spend a Sunday afternoon, and we went for it ourselves, all except our Designated Driver. (Mr. Designated would get his turn at home, with a few generous shots of mezcal.)

Hanging out on the periphery of this pleasantly pickled little coffee klatch, we were able, with the help of our young translators, to carry on a bit of a conversation with the ladies. My first question was about the little piles of what looked like lemons that they were possibly trading.

There didn’t seem to be much commerce, so maybe a little montón of fruit was the acceptable reason for sitting around on the curb drinking pulque. And we helped it right along by buying some, because a lemon in Mexico is a treasure to anyone from north of the border. There are limes aplenty, but few lemons.

The pasilla oaxaqueña chiles were here, too, and we were told that they were smoked over oak wood in another village and turned into chintestle, a chile paste with garlic and salt, here in Tlahuitoltepec. This is carried by people walking the many miles between villages, or by farmers going to their fields, to be spread on tortillas for an impromptu meal. The mountainous roads and paths here make walking a real workout, and although the terrain is mountainous, the milpas, or cornfields, are beautifully cared for.

In the milpas, fall is harvest time, and a visit to a milpa in late summer is highly recommended. Some years ago, right before harvest, we visited a family ouside Oaxaca, whose milpa was gorgeous. Red runner beans and squash grew up around the cornstalks, natural trellises for the leafy vines, and chepil and chepiche, the herbs that would be used to flavor these vegetables, grew among them.

A fragrant, herb scented soup, called sopa de guías, is made using the elements of the milpa, including the squash vines, and little corn masa dumplings, called chochoyones, add an earthy texture. This is not just food like Grandma used to make, but food that Great-Great-Great Grandma, and several generations before her, made. 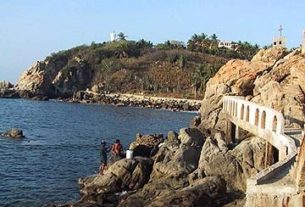 Photographs of Puerto Escondido, Vista Hermosa and pueblos in Oaxaca 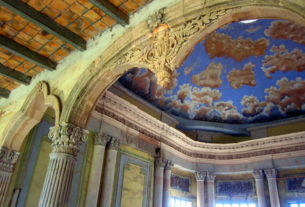 Touring the Yucatan by motorcycle