Photo Gallery: Antiques and collectibles in Central and Southern Mexico 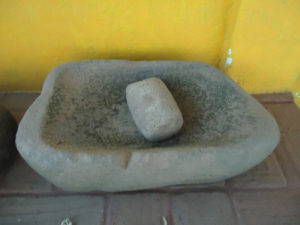 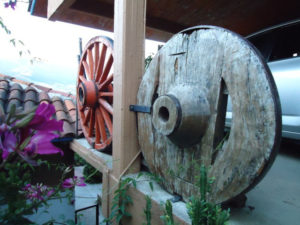 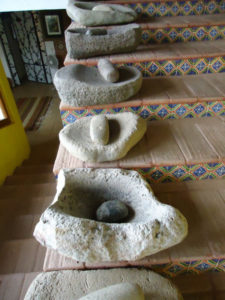 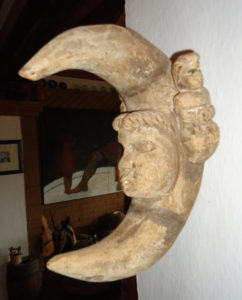 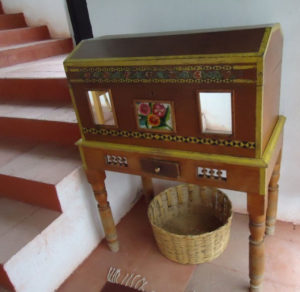 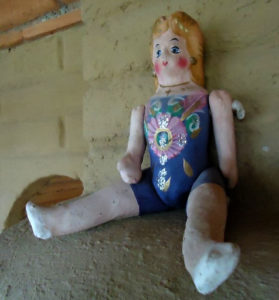 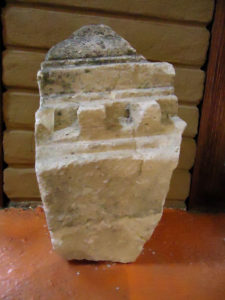 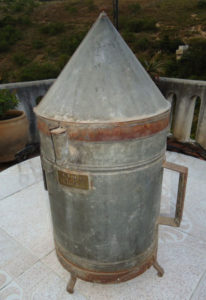 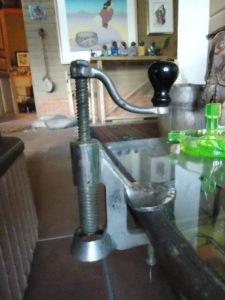 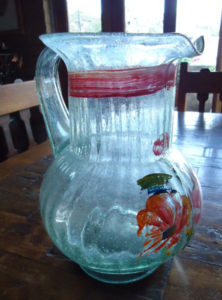 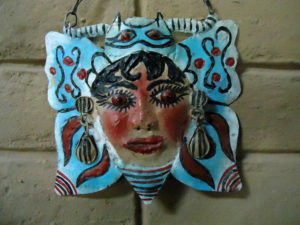 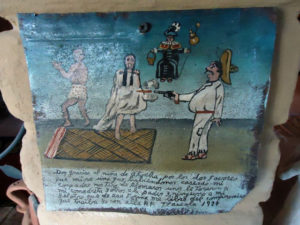 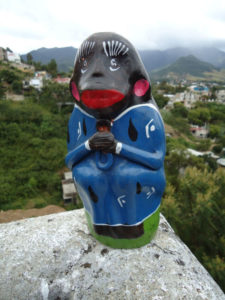 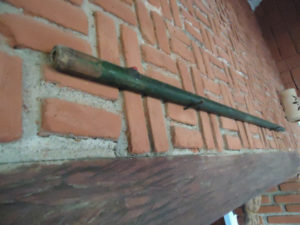 The Sunday open air stalls at the Lagunilla in Mexico City, the expansive roadside shops just north of San Miguel de Allende, the stores and weekend marketplace at Los Sapos in Puebla, and good old fashioned picking in the state of Oaxaca. Each provides a fruitful avenue for acquiring antiques and collectibles in Central and Southern Mexico. Of course there are many more, but over the past two decades this transplanted Canadian has found success pounding the pavement in these four venues, often in the case of Oaxaca, barely passable dirt roads and pathways.

While the selection and quantity of antiques available in Central and Southern Mexico is impressive, those searching for Depression glass and collectible glass from other eras might be in for a surprise. There is very little glass from American, Canadian and European factories available in Mexico, relative to what one finds in Canada and the US. And when one does come across quality antique glass, in most cases it’s very expensive.

Factories of hand-blown glass (known as vidrio soplado) have existed in certain parts of Mexico for ages but it’s a very different quality than the glass one encounters north of the Rio Grande. Mexican-made collectible glass is relatively commonplace, usually in excellent condition in terms of original hand-painted designs and without nicks, chips or cracks — priced to sell.

One encounters a fair bit of military memorabilia, vintage books, tiles and other ceramic pieces, advertising signs for products and cinema, coins, as well as other small items. Naturally, religious artifacts are quite prevalent, including retablos of varying sizes, ex-votos, cherubs, crosses, etc.

Ironwork in Mexico has been produced since the 16th century, and has generally held up well over the decades. In fact, ironworkers and blacksmiths in modern Mexico, at least in the southern half of Mexico, are arguably the best of all the building trades in terms of workmanship. Often highly decorative, locks and keys, railings, gates, fencing and frames, in addition to tools and weapons and a plethora of other iron products, are encountered without difficulty in La Lagunilla, Los Sapos, San Miguel de Allende, and even in the few antique stores in Oaxaca.

Collectible stone pieces are available in virtually all shops and markets, in particular grinding stones (referred to as metates with manos — the hand piece) used for crushing dried corn kernels, and mortar and pestle sets (known as molcajetes) for pulverizing predominantly spices, herbs and chiles. One can often also find hand-hewn limestone cornices which have come off churches, convents and government buildings, dating as far back as to the 16th century.

Both rectangular and dome- topped wooden chests or trunks are easy to come by. The box, referred to as a baul or chest, is generally pine and either painted or stripped. It is often found with its original four-legged base. For Americans and Canadians, these are simply pine blanket boxes.

Old doors from administrative buildings and ex-haciendas are massive in terms of height, width and thickness, frequently found with their original iron hardware in tact. Tables, wagons and wagon wheels and implements round out the other main wooden collectibles one can find throughout this part of Mexico.

Select locales for antiquing in Mexico

In Central and Southern Mexico, there are a number of excellent spots for antiquing.

The Sunday open air Mexico City antiques and collectibles market is known as Lagunilla. It extends for several blocks and is accessible by walking from any of the hotels close to the zócalo (central square), and of course by taxi. There are a few antique stores in the area as well, although the vendors with stalls constitute the main attraction at Lagunilla.

Many travel books and guides caution tourists about venturing to Lagunilla in term of safety and security. Some local antique dealers warn about being in the area approaching dusk. However antique hunters should be fine, provided normal precautions are followed — do not venture off to what would appear to be a somewhat “seedy” area, don’t flash large wads of cash, keep cameras and purses in front and close to the body and, yes, it would be imprudent to wander around the area as night approaches.

The quaint quarters in downtown Puebla known as Los Sapos, about four blocks from Puebla’s zócalo, are also a haven for collectors and dealers.

The weekend market is admittedly small, especially for those accustomed to the Christie Classic Antique Show at Dundas, Ontario, the expansive sales at Brimfield, Massachusetts, and similar large antiques and collectibles outdoor markets in Canada and the US. But one can find gems at Los Sapos, both by scrounging through the Saturday and Sunday stalls (not all the same vendors attend both days), and to a lesser extent in the shops within three or so blocks of the open-air marketplace. Lamps and chandeliers stand out, especially in the stores, at prices hard to resist.

Prices are surprisingly reasonable, given that in San Miguel de Allende there’s a community of ex-patriates, many of whom are of significant means. What is most unusual is that in San Miguel proper, prices are exorbitant; and it’s only a few miles away from the several shops and sprawling outdoor antique yards flecking both sides of the highway. Get out of the city, be it with a rental car or van, or by hiring a taxi, and stop by each and every roadside location.

While Oaxaca does have one extremely large antique store (on Calle Abasolo) with a particularly impressive selection of jewelry — and almost everything else — for its size, Oaxaca is a wasteland for collectors and dealers. Prices are steep relative to what one finds elsewhere in Central and Southern Mexico.

You simply have to get out of the city. But picking is hard work, and as is the case throughout Canada and the US, there’s never a guarantee.

Oaxaca is noted for its craft villages, market towns and colonial churches in the countryside. But these towns and villages have been pretty well picked over since the tourist boom ,which began in the 1960s. Accordingly, for a fruitful day or two, it’s imperative to get off the beaten path beyond the usual tourist stops, towns and villages.

Virtually all of the antiques and collectibles enumerated above can be found in Oaxaca’s hinterland, in addition to the occasional early craft product, such as fanciful wooden alebrijes, clay pieces, textiles, etc.

The central valleys of Oaxaca are purportedly where the chango mezcalero originated. The chango mezcalero is a baked clay receptacle painted as a monkey, used for holding and serving mezcal, the alcoholic beverage derived from the agave plant. The same $20 whimsically painted ceramic bottle produced beginning around the 1930s, fetches $500 or more on a couple of Mexican antiques websites. But like everything else, they’re getting harder to come by.

Mention of pre-Hispanic artifacts is conspicuously absent from the foregoing.

There are two reasons:

Other antique and vintage collectibles which are being reproduced and are sometimes represented as old, include advertising signs, metal pub trays, ex-votos, papier mache “puta” dolls, ceremonial masks and ironwork. Of course well-made reproductions are often quite attractive and suit one’s purpose, but unless you are certain, don’t pay prices that correspond to the value of real antiques and collectibles.

In some cases “contemporary” well-worn implements may appear to be antique, but are not — nor is there an attempt to misrepresent.

Take for example, metates. Some are pre-Hispanic, while others could be only 30 to 50 years old, since some Mexican women today, generally of indigenous origin, still grind corn over a flat river stone or boulder. After decades of use, theirs appears no different than a metate which was worked 1,500 years ago. The best way to score a worn metate while picking in the countryside is to bring along a brand new, three-legged and machine made one, to trade. Cash often won’t cut it, because you might be met with “If I sell this to you, what will I have to grind my corn tomorrow morning?”

Another class of collectible that may or may not be antique, yet without attempt to misrepresent, are tamaleras — galvanized metal containers in a variety of shapes and sizes, for making tamales and for carrying milk, water and other liquids.

Wood is often difficult to bring into the US and Canada. The laws in Australia are even stricter. Pine and other soft wood is susceptible to insect infestation, akin to termites. In Oaxaca the most common pest which can destroy pine, copal and other similar wood, is the powder post beetle. The problem is known as polilla. Tell-tale signs are tiny holes in the wood, or if it’s been sitting in one place for a while, a white powder can be found alongside the piece. If in a shop, look around the base before picking up anything made of wood.

When buying contemporary collectible alebrijes, and other wooden products, ask what precautions have been taken to prevent polilla infestation. In San Martín Tilcajete, Oaxaca, the high end workshop of Jacobo Angeles and María Mendoza soaks wood in a gasoline-insecticide mixture, and leaves in a special oven for a number of hours, so as to enable the workshop to guarantee its work.

Finally, resist the temptation to awake before dawn to get to the markets before anyone else. Antiques and collectibles dealers with stalls at the outdoor marketplaces, in most casesn do not arrive and set up at the crack of dawn, as they do at markets like Christie or Brimfield. If you arrive at 8 a.m. (before virtually all other pickers and collectors), you’ll be there while the vendors are setting up, and if you arrive at 10 a.m. there will still be stalls being arranged.

Having provided this advice, guess who nevertheless awakens at 7 a.m., and gets to the markets as soon as possible thereafter, invariably first succumbing to relaxing at a sidewalk stand for an early breakfast of hot chocolate and tamales, yes, before heading off to the market? 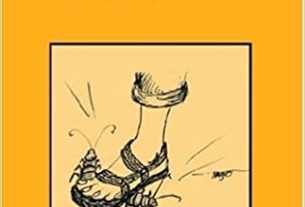