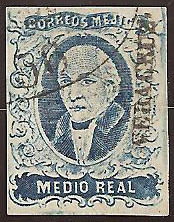 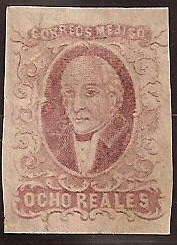 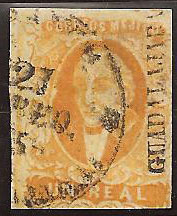 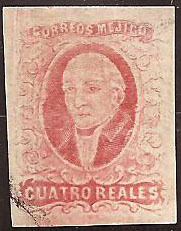 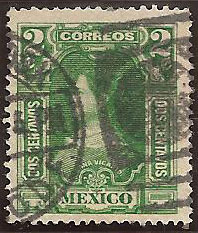 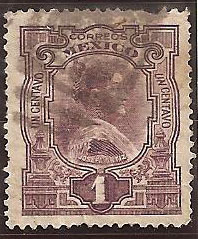 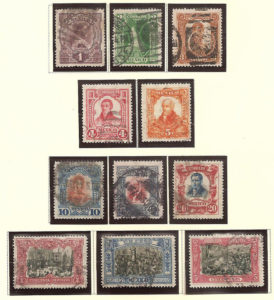 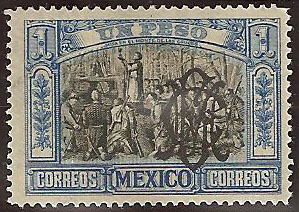 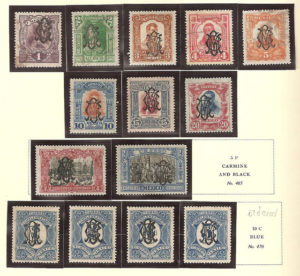 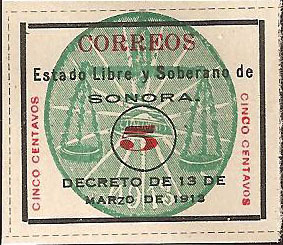 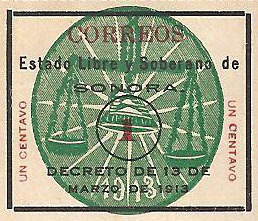 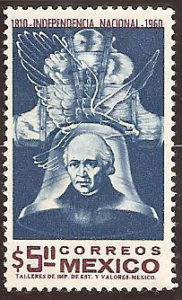 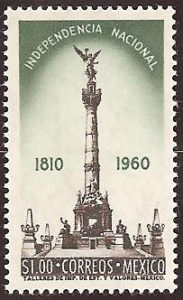 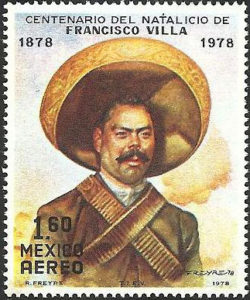 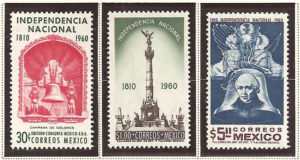 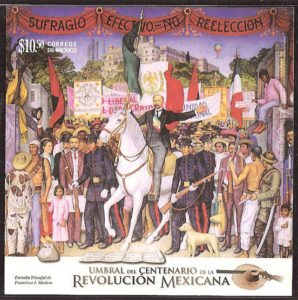 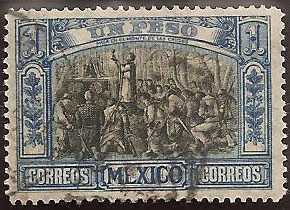 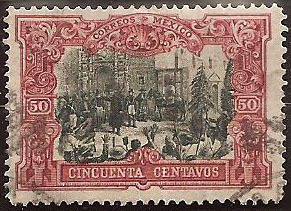 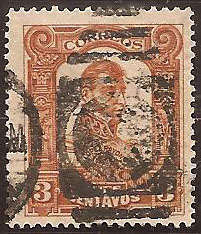 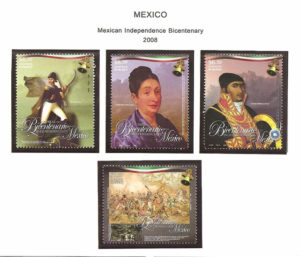 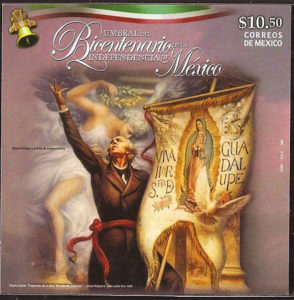 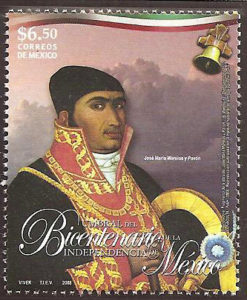 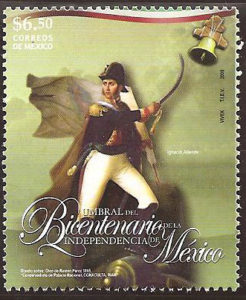 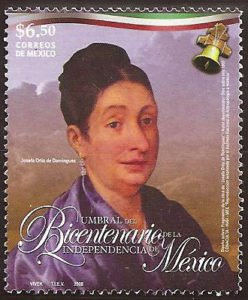 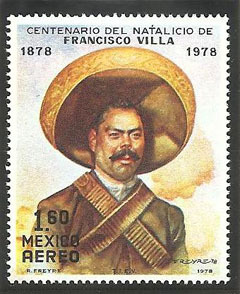 Mexico likes to celebrate, and this year it has two monumental events to celebrate. On the very day (September 16) of the Bicentenario, the Bicentenary celebrating Mexican independence — I leisurely looked over the collection of stamps of Mexico that I have accumulated over the past couple of decades.

Celebrating independence from Spain is nothing new to the Mexican Postal Service. One hundred years ago, in 1910, the Mexican Postal Service issued a set of eleven colorful stamps on the Centenario of independence, a set that included two women important to the rebellion — Josefa Ortiz and Leona Vicario — as well as men like López Rayón, Juan Aldama, Epigmenio González, Mariano Abasolo, Ignacio Allende, and of course the most important of all, Miguel Hidalgo y Costilla.

With this series, Josefa Ortíz and Leona Vicario became the first women depicted on stamps of Mexico. Josefa Ortiz de Dominguez not only provided much-needed financial support to the movement for independence. It was Josefa herself who alerted Miguel Hidalgo that their conspiracy to overthrow Spain had been discovered, which prompted Hildago to declare independence — “El Grito de Independencia” — on September 16 instead of in October as he had planned.

So important was Miguel Hidalgo, the “Father of Mexico,” that from 1856, the year Mexico first began to issue stamps, until more than thirty years later, no other face but Hidalgo’s appeared on a Mexican stamp… except for 1866 when four stamps appeared bearing the imperial profile of the short-lived intruder Emperor Maximillian. (It wasn’t until 1879 that another likeness was used — and that was on stamps issued exclusively for use on foreign-bound mail — and appropriately it was Benito Juárez.)

The Bell of Dolores is, of course, the bell that that fifty-seven-year-old village priest, Miguel Hidalgo, rang with such vigor on the morning of September 16, 1810 (exactly 200 years ago), in the parish of Dolores, in the state of Guanajuato, sounding the cry for independence. The bell is now in the National Palace in Mexico City and every year, on September 16, the President of Mexico rings it and repeats the patriotic cry, the grito, which ends with: Viva Mexico! Viva Mexico! Viva Mexico!

Why from tiny Dolores, one might ask, did this movement begin? It was because its leader, Miguel Hidalgo, had been banished to Dolores for fathering children (he arrived with his two illegitimate daughters) and reading prohibited books. He was three “fathers” — the “Father of Mexico,” father in the Roman Catholic Church, and father of two daughters. In 1953, incidentally, on the bicentenary of his birth, three stamps were issued to honor Miguel Hidalgo. Since 1856, so many stamps have been issued bearing the likeness of Hidalgo that a nice collection might be assembled of those alone. After independence, Dolores officially renamed itself Dolores Hidalgo.

It was also the 75th anniversary of the Mexican Revolution and a separate set of five stamps was issued to honor those heroes as well with stamps featuring Francisco Villa, Emiliano Zapata, Venustiano Carranza, Francisco Madero, and the soldadera, the woman who served (even in battle) at the side of her man.

For the 200th anniversary of independence from Spain, which we celebrate this year, the Servicio Postal Mexicano issued in September of 2008 a very colorful and attractive set of eight stamps and two souvenir sheets, followed in September of 2009 by another set of eight stamps and two souvenir sheets. The 2008 set includes portraits of heroes as well as scenes like the battle of Alhóndiga de Grandaitas, and the meeting of Miguel Hidalgo and Morelos, and a very beautiful souvenir sheet of Miguel Hidalgo crying out for freedom, with one arm raised to the heavens, the other embracing a banner of Guadalupe, while a beautiful and even sensual angel is kissing Hidalgo on the top of his bald head. The 2009 set includes portraits of Leona Vicario and her husband Andrés Quintana Roo as well as scenes like the execution of José María Morelos, the capture of Miguel Hidalgo, and the execution of Hidalgo.

Matching sets were issued in November of 2008 and 2009 to celebrate the forthcoming 100th anniversary of the Mexican Revolution, which we officially celebrate on November 20th, Día de Revolución, the day set by Francisco I. Madero in 1910 for the Revolution to begin. (You can find some amazing video clips of the Revolución Mexicana on YouTube.)

The 2009 set includes Emiliano Zapata, President Francisco I. Madero, Francisco “Pancho” Villa, Venustiano Carranza, and women revolution fighters as well as various scenes including railroads, the taking of Zacatecas, and the proclamation of the Plan of Ayala (the document drafted by Zapata which denounces Madero for what Zapata believed was a betrayal of revolutionary ideals, particularly land reform.

This bicentenary and centenary year is a wonderful time to begin a collection of the stamps of Mexico.

In some ways stamp collecting is the perfect retirement activity: it is intellectually stimulating, it is a pleasure to organize these little pieces of history into a nice collection, it can be adapted to any budget, it gives you a much stronger sense of the unfolding of history, and it becomes a little treasure to pass on to a child or grandchild.

As you might expect, Mexican stamps generally are carefully designed, colorful, often striking, even beautiful. They depict the history of Mexico as well as its geography, its industry, its flora and fauna, its architecture, its arts and crafts, its institutions, its regions, its heroes… its wonderful people.

(A final note: I intended when I moved to Lake Chapala years ago to become a dealer in Mexican stamps to the expatriate community — one more project I never got around to. Albums are easily obtainable… there is even a downloadable album you can print on your own easily obtainable quality paper for less than $10.)

Why I love to dance Mexican style