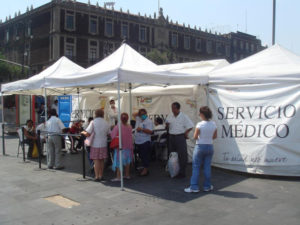 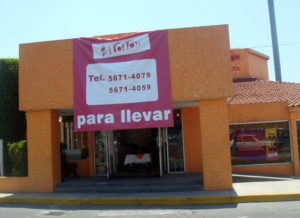 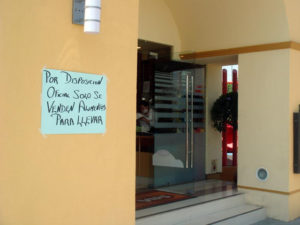 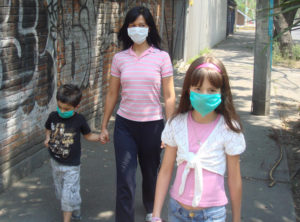 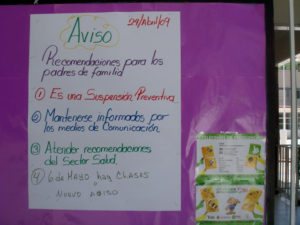 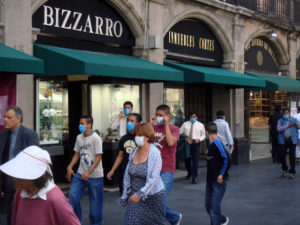 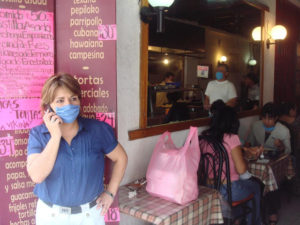 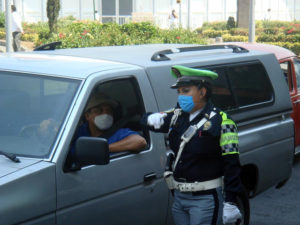 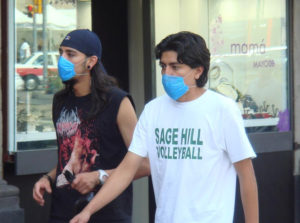 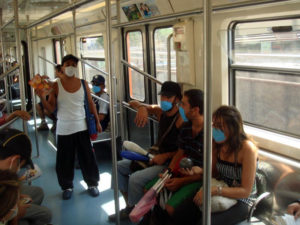 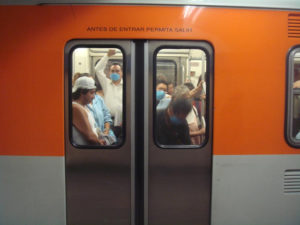 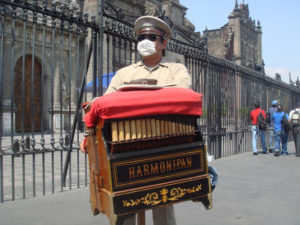 People are still going about their business as usual, only we’re all wearing surgical facemasks. I can’t decide if this whole fear campaign is a massive media beat-up or if it has some credence.

On the subject of the city – and schools, and cinemas, and restaurants, and bars, and churches, and parks, and sporting events, and rock gigs, and museums, and malls, it’s incredibly surreal to be here right now, due to swine flu panic, and the fact that you can’t go to any of these things. Tons of places closed, or otherwise empty, or otherwise “enter at your own risk.” You’ve never seen anything like it; it’s a movie, very apocalyptic.

At this stage all schools and universities remain officially shut until May 6. This sign reads: Notice Recommendations for parents This is a preventive suspension Stay informed through communications media Follow recommendations of the Public Health sector Classes resume May 6th, or there will be new news © Anthony Wright, 2009

Woke up Friday ready to go to the school where I teach, my wife pops her head into the bedroom and says the TV news is going crazy over something called “swine flu.” In classic Mexico fashion, totally out of the blue, no forewarning, just “it’s here” as in right now, and all schools and universities have been closed until further notice and everybody is strongly advised to stay indoors.

My wife’s work at the autism center was cancelled; our kids couldn’t go to school, so what was my deal? I called a colleague around 8 a.m. and she was already at the school. She told me that no students were there, but the office had said that the teachers had to go in. The TV news, however, said that teachers were not to go in. My friend said that only two teachers had shown up anyway – having presumably missed the TV broadcasts – so why should we attend an empty school to just sit there and do nothing? She said she was going to take off. I said no way am I going. I got the government telling me not to and the bosses could take it up with them. I didn’t go… the school never phoned or anything!

On Friday afternoon I went to the supermarket, still basically unaware of the severity of the thing. Well, the supermarket was almost empty and everybody there was wearing a surgical facemask. It was like science fiction! I’m thinking a William Gibson cyber novel.

So we were speculating all Saturday over whether we would have to go in on Monday, then the government announced that schools are suspended till May 6. The senior students are prepping for final exams. What a mess.

On Saturday afternoon, we went to Coyoacan to eat. No Saturday traffic, the square at Coyoacan practically empty, and everyone that was there was wearing a surgical mask – even tall blonde tourists from Germany. My wife bought masks for herself and our two kids from Sanborns for one peso each, but I refused one: the whole thing just seems so stupid… I’m not going to catch swine influenza!

The restaurant we ate in was empty.

Thinking over the reports I’ve read, I begin to wonder if I may have already had this thing. Two weeks ago at the end of our Spring Break vacation in Cuernavaca – after eating out and wandering around among crowds all day – I came down late at night with the most hellacious fever and diarrhea I’ve ever had. I had insane attacks of delirium, and I was thinking at the time that if I could have transcribed the visions rapidly flitting across my brain I’d have a surrealistic masterpiece on my hands. I was totally bedridden for four days then slowly came out of it.

Well, I was reading about this flu and it said that in some cases it consisted of fever and diarrhea.. .and that it’s been around since mid-April. I came down with this thing April 16. No cases reported in Cuernavaca, however. But it was strange; no one else in the family got it. Still, no one else ate five tacos al pastor that day like I did. Of course, yesterday I ate five tacos al pastor as well (and a plateful of bacon for breakfast) – my logic being that the government. didn’t tell people not to eat pork. Today I find that they’re banning pork.** Ah well, I like to live dangerously.

They say it’s only hit young people between ages 20 and 40. Infants and elderly not affected. The report I read said this was exactly the way it went down (initially) with the Spanish Influenza in 1919-20 – before it went on to kill 40 million worldwide! Today the Catholic Church even cancelled Sunday Mass.

What a radical move that is!

So the Chinese proverb of “may one live in interesting times” is yet again being fulfilled here, although the idea of being at Ground Zero of a potential worldwide epidemic is not particularly wonderful. I only hope the whole thing goes the way of the Asian Bird Flu and fizzles out from a media-fuelled panic attack into a non-event very quickly.

I’m wearing a mask now. Even in the car. I took a Metro into the Historic Center to take some photographs, and my one pervasive feeling is that this place has become a masked city. Virtually everyone is sporting them. Nobody looks twice at anybody else. This is now the normality of living here. People are still going about their business as usual, only we’re all wearing surgical facemasks. A few hardy tourists walk around, also with masks donned. But what is the normality now? Many restaurants are closed. Cantinas are closed. There are not nearly so many people on the streets, or riding the Metro. The traffic is way down. People are staying indoors – except when they go to the supermarket to stock up on tinned food and water. Now the supermarkets are full.

I spoke to my school colleague again. She was one of three teachers who showed up at the school on Friday. They were there for a couple hours and left. In that short space of time, with no students at the school, one teacher came down with swine flu once she got home. I don’t know much about her condition except that she is getting though it and will presumably pull through. My colleague’s son’s girlfriend, a university student, also has it.

It’s getting slightly cabin feverish. We try to get out once a day to buy some food or just walk around. But most everything is still shut. Even if the cinemas re-opened I would not be inclined to go: I keep thinking of that scene out of – what was it, Epidemic? The one with Dustin Hoffman, when the infected person sneezes in a crowded cinema and the germ-infected expulsion of tiny globules of spit is rendered in ominous slow motion. No way am I going to the movies. The kids really wanted to see Wolverine, too, but the premier has been cancelled and Hugh Jackman’s not coming.

Now they’re talking about infants and small children catching it so naturally I’m more worried about my kids. Still, is it any worse than a regular flu season? It’s so surreal in this veritable ghost town and the world seems to be freaking out so much that it’s become rather hard to maintain a proper perspective on what’s going on.

I can’t decide if this whole fear campaign associated with this flu business is a massive media beat-up in conjunction with a massive over-reaction by the powers that be, each  inexorably feeding off each other, putting out fire with gasoline, exploding with sound and fury from one crisis to the next, the citizens always their hapless victims – or if it really has some credence (which I feel in the end it most likely won’t, and of course I pray that this latter observation doesn’t turn out to be a case of “famous last words”).

A curious result, personally, is I’ve now had my five minutes of fame (or fifteen, as Andy Warhol once said) – having been, in the space of three days, interviewed on live radio by ABC Radio Melbourne and ABC Radio Perth; had a story about me published in The Herald Sun (Melbourne); and mentioned in The Daily Telegraph (Sydney) – and this is just what I know of. But I reckon we’ll get outta Dodge tomorrow and head to Cuernavaca to escape this madness!

Will we take our masks?

(We’re in close contact with the Centers for Disease Control and Prevention. They are constantly updating their site in English and in Spanish, so please check it frequently.)

**Sergio Esparza, father of Mexconnect photographer Daniel Esparza-Wheeler, said the virus is spread from human to human, and that there is no danger from eating well-cooked pork. Dr. Esparza is head of the Nosocial Infections department in Guadalajara’s Hospital Civil. His specialty is Infectious Diseases, and he holds a Ph.D. in Epidemiology.

MexConnect is in no way minimizing the need to take precautions, as outlined by the World Health Organization. 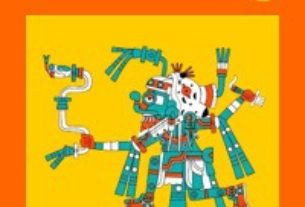 Life for singles in Mexico

Retiring And Living Around Tijuana

Driving across the Mexican border: Regulations and guidelines