M?xico (pronounced MEH-hee-coh by Mexicans) is a land of sharp contrasts. It is bordered on the North by the United States of America, to the south by Guatemala and Belize, to the east by the Gulf of Mexico and to the west by the Pacific Ocean. Towering mountains alternate with broad plateaus, and scenic highlands give way to unexplored jungles in this country that lies in both the Temperate an Torrid Zones. Its 761,603 square miles (1,972,552 sq. Km) are roughly triangular in shape with two jutting peninsulas–Baja (Lower) California and the Yucatan. Its coastline along the Pacific Ocean totals more than 4,400 miles (7,100 kms), as compared to some 1,760 miles (2,830 km) along the Gulf of Mexico and the Caribbean Sea.

Central Mexico is an elevated plateau dominated by high mountains, many of which are of volcanic origin. In the north this plateau drops steeply to the wide valley of the R?o Grande, called the R?o Bravo in Mexico. The east coast is low and flat, but in some localities, notably the state of Veracruz, the lofty mountains are so near the coast that they command the landscape. Another low, sandy shoreline characterizes the northwestern part of the country, with the plateau rising sharply behind it. Rainfall is heavy along the coast of the Gulf of Mexico, but on the northern Pacific slope and its interior region, where precipitation is scant, irrigation is needed.

Peninsular Baja California, although generally arid in character, encompasses a more varied terrain than is commonly believed. The backbone of Baja comprises several westward-sloping mountain ranges. Sierra de San Pedro dominates the north; Sierra la Giganta, the south. In the former, Picacho del Diablo attains an elevation of 10,073 feet (3,070 m), the highest point on the peninsula. Near the center is the parched Desierto Vizca?no, but other areas are more lush, particularly the agricultural north and the tropical south.

The Sierra Madre, extending northward from Nudo de Zempoaltépetl in the state of Oaxaca, is divided into two great mountain ranges: The Sierra Madre Oriental and the Sierra Madre Occidental form the eastern and western edges of the plateau region. The highest peak is the volcano Pico de Orizaba, or Citláltepetl (see-tlAHl-teh-petl), which rises 18,850 feet (5,747 m.). Popocatépetl (po-po-cah-TEH-petl) volcano is 17,883 feet (5,451 m), and Iztaccíhuatl (ees-tahk-SEE-wahtl) is 17,338 feet (5, 285 m). In the same mountain chain Nevado de Toluca rises to 15,032 feet (4,582 m) and Cofre de Perote reaches to 14,018 feet (4,273m).

There are hundreds of other volcanic peaks in Mexico; in the state of Michoacán alone there are more than 80. Mexico also boasts the Western Hemisphere’s youngest volcano: Boquerón, on the island of San Benedicto about 250 miles south of Baja California, was created in 1952. Other recently active volcanoes include Paricutín, now dormant, and the Chichonal. Born in the fall of 1943 when a cornfield suddenly erupted, Paricutín grew more than 1,700 feet in 10 months. As recently as April 1982 the long-dormant volcano El Chichonal spewed as much as a billion tons of ash and rock across a 6.2-square-mile area near Teapa in southern Mexico.

The height of the mountains is accentuated in the interior by deep valleys and canyons, some more than 1,600 feet below the general level of the plateau.In these valleys the luxurious vegetation and climate is tropical. The plateau above is fairly level, sloping gradually up from an elevation of about 3,600 feet at the U.S. border near El Paso to between 8,000 and 9,000 feet in the states of Mexico and Puebla. Mexico City, more than 7,000 above sea level, lies in a great basin completely surrounded by mountains. Some of the many lakes throughout the country’s mountain areas are summer resorts known for their beauty.

With more than 6,000 miles of shoreline, Mexico has four distinct coastal regions. To the northwest, the Sea of Cort?s (Gulf of California) meets desert; to the west the Pacific crashes against the foot of the Sierra Madre Mountains; to the southeast white sand and coral reefs characterize the Caribbean; and to the east the Gulf of Mexico invades the flat coastal terrain, creating many palm-lined lagoons.

Mexico’s river system, neither varied nor extensive, includes few rivers that are navigable for any distance. The main rivers are the Rio Bravo del Norte (Rio Grande), most of which lies in U.S. territory; the Coatzacoalcos, in the isthmus region; the Grijalva and the Usumacinta, whose headwaters are in the mountains of Guatemala and whose currents mix in the state of Tabasco shortly before draining into the Gulf of Mexico; the Balsas, which rises in the state of Puebla and drains into the Pacific between the states of Michoacan and Guerrero; and the Lerma-Santiago, which begins near Toluca and Mexico City and flows into the Pacific in the state of Nayarit.

Rainfall occurs between the months of May and October throughout most of the country. Cloudbursts or prolonged downpours are rare. These summer rains cause little inconvenience and tend to refresh the atmosphere. It seldom rains during the rest of the year, and Mexico has more hours of annual sunshine than many other countries. Major urban centers–particularly Mexico City–can, however, be plagued with smog during the dry winter.

The political system is Federal Democratic as the Republic is comprised of free and sovereign states.

The monetary unit is the Peso, which is a floating currency.

The system of measurement is metric decimal.

The religion of the most of the people who live in Mexico is Roman Catholic, although there are many protestant and other sects.

Typical Mexican food derives from Indian, Spanish, French and even Moorish and Chinese influences. Many dishes are hot and spicy, and even familiar foods taste distinctive when cooked with the Mexican touch. The nation’s favorite festive dish is mole de guajolote. Guajolote is turkey, and mole (MOH-leh) is a rich, thick sauce made from various chiles, ground peanuts, spices, sesame seed and chocolate. More prevalent dishes are those made of either frijoles (beans) cooked in various ways or rice combined with vegetables, chicken livers, plantains or eggs. Guacamole is a salad that consists of mashed avocado seasoned with onion, hot peppers and tomato. It is often served with granada (pomegranate) and totopos (fried tortillas). Corn, is a staple of the Mexican diet. The tortilla, also common in Central America, is a thin pancake made of coarse cornmeal and appears in many guises on a Mexican menu. Tacos, tortas, pozole, quesadillas, enchiladas and others. Typical Mexican desserts are fruit pastes called ates (AH-tehs); cajetas (kah-HEH-tahs), chongos and jamoncillos, cocadas. Mexican beers are appreciated throughout the worlsd, and the domestic wines are becoming quite good. From the several varieties of the maguey (mah-GAY) plant, a cactus-like jack-of-all-trades, are produced aguamiel and pulque (central Mexico), mezcal (Oaxaca), tequila (Jalisco), comiteco (Chiapas), charanda (Michoac?n), zotol (Chihuahua) and bacamora (Sonora).

This article is electronically reproduced with permission from the Mexico 2000 Business Directory. Your Passport to Mexican Business. 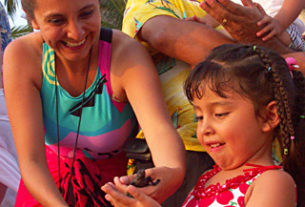