A striking Associated Press photo appeared in the El Paso Times on April 30th. It showed a skinny, dusty, Mexico City boy, maybe 10 or so, hunkered down by the weight of a dozen bricks, supported by a strap from his forehead down his back. (These same backstraps were used by children and adults on virtually the same spot 600 years ago). The caption read, “April 30th, Day of the Child in Mexico.”

No child should be working like that, but this piece is not a denunciation of child labor. Rather, in light of the Columbine High School shootings in Colorado and other such incidents in the United States over the course of the last few years, I would like to present a typical youngster of Mata Ortíz:

He’s a slender drink of water, this Samuel López, much taller now than when I first knew him eight years ago, when he was only eight. Even then, he was wiry and a helluva lot stronger than he looked. I watched him one day handling the tractor under the guiding eye of his father, Inocente. It was March 1996 (Samuel was 13) and the boy was turning the dry soil of the field into dusty furrows. Soon, con favor a Díos, it would be time to plant.

Samuel had quit school after the sixth grade and with his father, he works their labor, a hectare of ejido land outside of town. Below the cemetery and near the Río Palanganas, the labor is divided into sections where the López’ grow corn, beans, alfalfa and some squash. It is a hard life, made even more difficult in recent years due to a five-year drought that has laid siege to Chihuahua and the neighboring states. Crops shrivel, cattle die and their selling prices dive while gasoline and electricity tariffs continue to leap dramatically.

Like most children in Mata Ortíz, the rest of rural Mexico, and much of the third World I have visited, Samuel has been given much responsibility at an early age. The first time I ever saw him, he was wielding a machete, chopping the husks from the bamboo-like stakes of sorghum. If he were a girl, he probably would have been carrying for the baby of the family–minding her, changing her, feeding her. There is no gender discrimination–all the youngsters work.

How politically incorrect from our society’s point of view! We give our children less and less responsibility–often because of the mandates of law. In many states, it is a crime to leave children 12 or younger unattended at home. In North Carolina a government official saw a 14-year old batboy working at a professional baseball game after 9 p.m. He had the kid fired–violation of child labor laws. In his view, the boy was being abused. (The politico later rescinded his position. Amazing, the power of the press).

By denying responsibility to our children, we are saying we don’t trust them. They can’t do things right–they are too young, too immature. Many of our kids end up with little feeling of self-worth. A few rebel in awful ways. Then, we as a society must find exterior sources of blame. Often we turn to the entertainment industry. It must be the fault of Hollywood or, (shudder) the Internet!

The movies and videos of Mexico and Thailand (another good third World example) are a dozen times more violent than ours, yet the adolescent boys in those countries aren’t blowing away their classmates. The fault for the horrendous events at the American schools over the last few years lies not with the media, but within the family.

Extremes are usually not good. The little Mexican boy struggling with a load of bricks illustrates one extreme. Our kids, who aren’t given responsibility for anything and left to fend for themselves without guidance, are at the other extreme end of the pendulum. Both are forms of child abuse. . . . 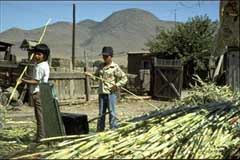 A few years ago, the labores (tillable fields) of Mata Ortíz were lush and rich. But, as a worried young Samuel told me in 1996, “Last year we only harvested about 50% of our crop.” His mother, Aurelia, has gone back to making simple black pottery to help make ends meet. There was stress in his family and throughout the community because of the drought. Samuel didn’t resort to guns or drugs, he just worked harder. And he was no different than thousands of other kids throughout the region.

Ever since I have known Samuel–and before–he has enjoyed working the fields and tending their few cattle. Many days, he would rush home from school, mount his horse Ruben, and trot down past the cemetery to the labor. Now, it is his full time job. The last few years have been rough, but Samuel is confident things will turn around. Somedays he staggers home after a 12-14 hour day, but he loves it. He is considered a man of the family. Life may be hard, but it is also fulfilling. He may not have a color TV and Nintendo, but he does have a wealth of self-worth.

Samuel turned 16 in May of 1999. One day the labor will be his. Let’s hope all his harvests are fruitful. 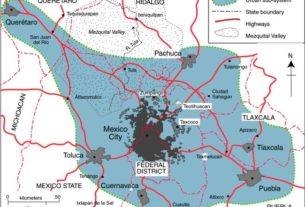