This article is Part 5 of Tony Burton’s series:
“Can Mexico’s Largest Lake be Saved?” .

This seminal work is the first major book-length scientific publication in English about the lake.

As James Leckie writes in the foreword, “Although many public and private institutions, universities and research centers have conducted studies on the Lerma-Chapala Basin over the last two decades, the need for a comprehensive summary of the findings of those studies has become increasingly obvious and important for this critical water resource.” This collection of articles includes contributions from researchers in such universities and research centers as the University of Guadalajara, Mexican Institute of Water Technology, Autonomous University of Guadalajara, Baylor University, the Harvard School of Public Health and Environment Canada.

Comprehensive bibliographic references at the end of each chapter show just how many scientific papers have been published about the lake (in Spanish and in English) in academic journals. An index at the end of the book makes it relatively easy to cross-reference important topics from one author to another.

Section I, “Natural Resources and Management in the Basin” (pages 1 – 92), contains three chapters. The first is a straightforward overview of the basic hydrology of the basin. The second chapter deals with geology, sediments and soils in a systematic manner. This chapter introduces the idea of the changing morphology of the lake over the past 200 years as a result of natural climatic variability and of human activity. It would have been nice to see an extended discussion of the “geological hazards” in the region, rather than this simple listing (with references to articles elsewhere) of fissures, mass movements, debris- and mud-slides preceded by waterspouts, floodings, droughts, differential movement of clay soils, volcanic eruptions and earthquakes. Sedimentation rates are examined in some detail and found to vary from about 5 mm/year in the eastern part of the lake to less than 2 mm/year in the western part. The final chapter in Section I covers some aspects of natural resources management in the basin, with an interesting discussion of the relative costs and efficiency of different techniques of irrigation, a key consideration in the basin.

Section II, “Pollution and Health” (pages 93 – 136), includes two very timely chapters. The first, by the editors of the volume, provides an excellent overview of the sources, accumulation and dynamics of toxic substances, including an analysis of the changes in contamination level that result from decreasing water levels. The second chapter in this section examines the complex chemistry associated with the concentrations of heavy metals in the lake’s water, sediments and biota, and concludes that there is an urgent need for the regular monitoring of arsenic, cadmium and lead levels in drinking water extracted from the lake, and of mercury, lead and copper levels in fish. One interesting finding was that, “in general, fried fish contained lower concentrations of metals than did fresh fish; this difference was significant for cadmium, nickel, zinc and mercury. Possible contributing factors include dilution from the batter, loss of metals to the frying oils or volatilization.” (p. 132)

The five chapters in Section III, “Lake Chapala” (pages 137 – 242), discuss the “physical” aspects of the lake. The opening chapter introduces the lake’s limnology, and emphasizes that the lake is “among the shallowest of the world’s large lakes”. A useful table on page 142 links the precise elevation of the lake surface at any particular moment in time to changes in its volume, area and depth. This table helps to explain why even the “average depth” of the lake apparently differs from one page to another in this volume, ranging from 4 to 7 meters (page ix) to 7.2 meters (footnote 10 on page xvi). The second chapter in this section explores the physics of the lake’s hydro-meteorology and of its variability over time and space.

The next chapter looks at the data for water quality for three time periods: 1974-79, 1980-89 and 1990-98, and tries to establish the nutrient balance of the lake. According to their analysis, the lake has maintained a consistent eutrophic status during the last 30 years. The fourth chapter in Section III examines phytoplankton and bacterioplankton production variations and concludes with a look at the trophic levels in the lake. The final chapter discusses the fish fauna “past and present”, ending with some well-founded suggestions for how to arrive at meaningful conservation and management strategies. One of the many interesting observations made in this chapter is that most of the fish taxa presently found in the lake are “considered to be tolerant to polluted waters”, while “some sensitive species… have not been captured recently”. Another is that the reported commercial fish catch fell from 13,711 metric tons in 1990 to 3,484 tons in 1998 (figures rounded to the nearest whole number).

The discussion of fish and fishermen leads naturally into the five chapters of Section IV, “Social and Economic Aspects” (pages 243 – 370). The first chapter is an empirical study looking at social awareness regarding the Lake and its environment by examining attitudes in three different lakeside communities: Jocotepec (on the northern shore), Tizapán el Alto (on the southern shore) and Scorpion Island (or Isla de los Alacranes). Some significant differences emerged which should be taken into account in any project requiring active social participation. For example, most residents of Tizapán el Alto do not consider that the lake has any role to play in their future.

While the second chapter is a somewhat disjointed examination of the “social characterization” of the Lerma-Chapala basin, the third chapter looks closely at the competition for water within the basin, primarily from an economics standpoint, and discusses the economic and policy implications of water transfers from agricultural uses to urban areas. This discussion gets to the heart of one of the major issues connected with preserving Lake Chapala – the economic costs involved in any re-allocations of water usage within the Lerma-Chapala Basin. For example, the authors found that the “bulk transfer of 240 million cubic meters of water from agriculture to Lake Chapala for subsequent urban uses in Guadalajara city in November 1999 resulted in an estimated US $14.1 million in foregone agricultural benefits, equivalent to US $0.06/cubic meter. Given that estimated urban water values are at least four (and up to 20) times greater than this loss, compensation of the benefits foregone by farmers appears to be economically feasible for urban water users. An option contract arrangement in which urban users agree to compensate farmers for foregone benefits appears to be a possible approach to inter-sectoral allocation in the basin.” (p. 292)

The next chapter appears to sit uneasily in this collection. Entitled “ProEstado-Maua”, and subtitled “A systems dynamics approach for the design of a sustainable water-use strategy in the middle Lerma-Chapala Basin”, it evaluates the application of complex mathematical modeling (involving 2,500 equations and 800 variables) to water-use in the state of Guanajuato, concluding thatthis approach does provide a satisfactory conceptual framework for both natural and socioeconomic systems to be considered simultaneously.

The last chapter in Section IV is a straightforward but useful account of the development of institutional arrangements for water management in the basin. A table on page 353 reminds us that “from a water perspective, the basin is in crisis, with demand exceeding supply in all but the wettest years.” The graph and table on the next page should, perhaps, have been used earlier in this volume. They summarize several key variables and how they have changed in the basin decade by decade since 1930. Over the past sixty or seventy years, rainfall has varied by 17%, population has risen 340%, the storage capacity of dams has increased by 390%, the area under irrigation has risen by 290%, the lake inflow from the Lerma river has decreased by 79% and the amount of water extracted from the lake (excluding evaporation) has decreased (Yes! decreased) by 89%.

Section V, “Summary and Conclusions” (pages 373 – 378) consists of a single, short chapter by the editors, ending with a list of conclusions from an overview of the papers presented in this volume. “It is clear that something has to be done to preserve Lake Chapala, which generates significant tourism revenues, represents a unique ecosystem, generates fishing revenue, and supplies over two million inhabitants of Guadalajara with domestic water and last, but not least, has an elevated symbolic value as it is still Mexico’s largest lake.” Indeed it is. The question is, for how much longer?

Some repetition between chapters is probably inevitable in a work of this kind, but too many irritating minor errors have survived the editing and publication process. For instance, on page 140, the botanical name for the water hyacinth is given as “Eichornia crassipes”; the correct spelling is “Eichhornia crassipes”, as used on page 210. In Chapter 2, both the text and a photograph list one particular map as the “Grasshopper (1998)” map of Chapala. The photograph (p. 43) depicts a version of José Narvaéz’s 1816-17 map of the lake (which incidentally is the earliest known bathymetric survey of the lake) that was actually first published in 1909 in Terry’s Mexican Handbook. Why anyone would ascribe this map to a website, even if it does make a good screensaver, is beyond me! But, what makes this error particularly glaring is the fact that even on the photograph, the legend “Made specially for Terry’s Mexico” is clearly legible near the bottom of the map. Another inaccurate reference is to the origin of the figures for mercury levels in the bulrushes (page 130). While I’m sincerely flattered that anyone would ascribe these figures to me, they actually come from an article in El Financiero newspaper (September 30, 1996), written by José de Anda and C. J. Uribe Hernández.

And, while I am still in nit-picking mode, the cyclical nature of Lake Chapala’s fluctuating levels, referred to several times in the text, may well be more a function of the time scales employed on the graphs (pages 28 and 354 ) in this volume, rather than being indicative of any genuine cyclical behavior. Both graphs of lake level fluctuations begin in the 1930s. The cyclical behavior of lake levels is far less obvious if the data record is extended back to, for instance, 1900, as is done in Lago de Chapala Investigación Actualizada 1983, published by the Universidad de Guadalajara.

For the most part, the book is clearly written with very helpful maps and diagrams. The binding is stout and likely to withstand constant mishandling, as sources are sought and references checked. It is perhaps debatable if it was worth including the (small) color photographs scattered through the text. They may have been one of the factors contributing to the volume’s high price, which will inevitably restrict its sales and circulation.

So, in conclusion, would I recommend this book? Absolutely! Despite its numerous minor flaws, some of which are probably inevitable when producing a book from papers presented in a symposium, the editors are to be congratulated on producing a landmark publication in the history of efforts to understand and help preserve the lake. Even though it is only available in English, this book should definitely be available in every public library in the area as a reference resource for all. What’s more, anyone genuinely interested in trying to “save the lake” should start by giving this a good read – it provides an excellent academic background to understanding the lake and the issues connected with its future.

The reassuring thing that emerges from this weighty tome is that much of the basic background science is definitely in place and well established. Now, we need some visionary politicians to “grasp the nettle” and make some real commitments to all the eleven million inhabitants of the Lerma-Chapala Basin. 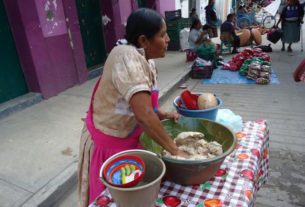 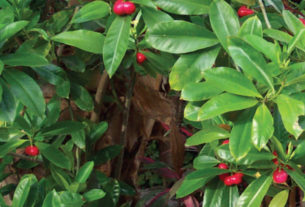 Diego, Frida and the Mexican School