A chance remark recently by Mexico Connect publisher David McLaughlin has prompted me to examine the statistics on Mexican beauty.

As a single, footloose and fancy-free, 20-something-year-old in Mexico City in the 1980s, I often heard that the most beautiful women in Mexico came from the state of Sinaloa. While I’m not confessing to having definitive proof one way or the other (to do otherwise would jeopardize the essential impartiality of this report, and might even threaten my marriage!), it appears that the rumors must have been true.

The first Señorita México (Miss Mexico) national beauty pageant was held in 1952 and won by Señorita Chihuahua. The contest was held annually (with a couple of exceptions) until 1993. In 1994 it was replaced by Nuestra Belleza México (Our Mexico Beauty). The winner of Mexico’s national beauty pageant represents Mexico in the Miss Universe competition and Nuestra Belleza México was founded by Lupita Jones (Miss Mexico 1990) who went on to become Mexico’s first Miss Universe. 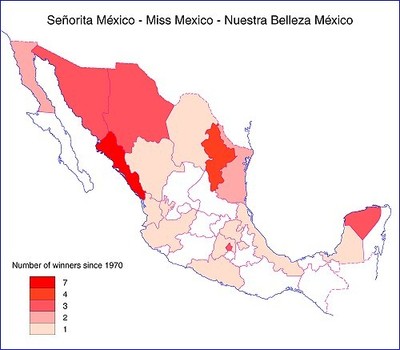 Where does Mexican beauty reside?

Prior to 1970, Miss Mexico was a relatively small event, less than truly national, and young ladies from Mexico D.F. won 9 times in the first 14 occasions the competition was held. Despite the event’s low-profile, some years were marred by controversy. For instance, accusations of favoritism were levelled at the organizers of the 1957 event since the winner apparently held Spanish citizenship. In these early years, no other state besides Mexico D.F. won more than once.

Since 1970, the results reveal a clear domination by señoritas from Mexico’s northern states. Sinaloa has won no fewer than 7 times. The other winners (number of times in parentheses) have come from Nuevo León (4), Sonora, Chihuahua, Yucatan and Mexico D.F. (3 each), Baja California and Tamaulipas (2 each) with a single winner each from Coahuila, Durango, Jalisco, Nayarit, Guerrero, Veracruz, Tlaxcala, Hidalgo, Edo. de México and Campeche. For the geographically-challenged, the map shows the pattern that is revealed.

The dominance of northern Mexico is clear. My Mexico City friends all those years ago were right – the most beautiful women in Mexico definitely come from northern Mexico in general, and from Sinaloa in particular!

To avoid accusations of sexism, let’s also take a quick look at where the winners of the nation’s male beauty pageant equivalent, El Modelo México (Male Model Mexico), come from. This event, also run by the Nuestra Belleza México organization, has been held six times since it was started in 1996. Jalisco and Mexico D.F. have supplied two winners each, and Nuevo León and San Luis Potosí one each.

Published or Updated on: February 1, 2008 by Tony Burton © 2009
Share This:
Tagged did you know Sinaloa Tony Burton 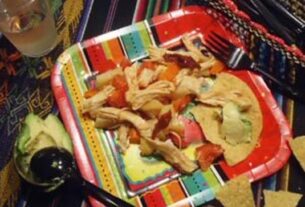 Mexico’s grain of the gods: Cooking with amaranth

1 thought on “Did You Know? Sinaloa has the most beautiful women in Mexico”