For some, illegal immigration is a simple equation, what you risk for what you get.

Luis Alberto Martinez Gomez became an illegal immigrant four years ago. He was 16.

“Everybody was on their way to the U.S.”

He had shallow roots in Tepic, four years until his parents divorced. After that, his mother moved around. That was fun for a little while. Ninth grade was a problem.

The family concluded Luis might be better off in the United States. There was a potential destination, Rialto, California, and an uncle who delivered appliances for Lowe’s. He had once made a promise to help the nephew if ever needed. He came through with cash for a border coyote.

Going north sounded so simple. Just follow the leader. Find Los Angeles. Hitch a ride to Rialto on historic Route 66. It would be just like the movies — without subtitles.

Luis and a cousin took a bus to Altar, Sonora, launch pad for breaking into Arizona. Tour guides were waiting, each offering a better deal for advance payment. Nuestra Señora de Guadalupe was the place to say your prayers. Cheap hotel nearby.

What is safe? Who can you trust? Business, now down in Altar, was then flourishing. It was a tough town. You might get mugged. Or kidnapped. Or killed. Keep one hand on your wallet but get food and water at the little store. Don’t buy more than you can carry.

There were 17 in the travel group, some excited, some scared, some desperate. Luis remembers the actual crossing as much to do about nothing, just a step over a single wire. Others had been cut.

The four-day walk in the desert was tougher.

“I had food and water for two days.”

What Luis saw and heard was sobering. Stick crosses. Rock graves. Buzzards on alert. The guide said June temperatures were 116 in the shade. Sleep in daytime if you can. Move at night.

“We got caught in a terrible thunderstorm. Some who were superstitious thought it was the end of the world. They screamed and cried. It was June 6, 2006, 6-6-6.”

There was another crisis. The cousin stole Luis’ last bottle of water. “When we came to a farm pond, I drank with the cows. I dipped the dirty water with my cap and filtered it through my shirt.”

No food was no problem. Luis didn’t have much of an appetite.

Some struggled. The coyote offered encouragement.

“He kept saying Tucson was just beyond that next mountain.”

Luis developed blisters on his feet. His lips were parched and cracked. He had two sores inside his mouth. He worried about infection.

“The coyote gave me aspirin and a can of Red Bull from his backpack.”

Luis remembers his thoughts when he finally saw city lights.

“We really are in America. I was so happy but the joy was tempered. I knew I was doing wrong, breaking the law, but I was not a bad person. I was not carrying drugs into the United States. I was not going to hurt anybody.”

The migrants were met by a blue Ford pickup truck, an F150. They were given water and slices of watermelon.

“They stacked all of us in the back, two or three layers, and covered us with blankets and spare tires. They said it was camouflage against helicopters.”

Tension? There was only one report of a Border Patrol SUV, off in the distance.

“We went to a garage in Tucson. It was full of Mexicans. Some were going to California, some to North Carolina, some to Illinois. They gave us chicken soup, clean clothes and put some of us in another truck headed for Phoenix. It was not so crowded.”

The third shuttle was a Ford Explorer. Inside seating. Luis traded pesos for three dollars to buy snacks and water at a gas station. He was surprised by how fast people were driving on the four-lane highway and that there were no toll booths.

“At one stop, I got to look inside a casino. I couldn’t believe it.”

The man managing the illegals went a few miles beyond his obligation. He knew Rialto. He delivered Luis to his uncle. There was dinner and a small celebration. The very next day, the uncle got Luis going on English.

“I went to school in August. They put me in sophomore classes, bilingual. They gave me a test and said I was a junior, regular classes. I didn’t know enough English. School was very hard.”

It was shocking. There were young people from Honduras, El Salvador, Guatemala and Colombia in a California high school. Luis was surprised by the appearance and conversation of blacks.

“I had never seen or heard anything like that. They called me ugly names. One said I was a beaner. I said everybody eats bean. I don’t think that was very smart.”

Math was easy. He became a tutor. He was quick to pick up English. He helped others with history. His senior year was a snap. His academic performance was stunning. His grade-point average was 3.6. He graduated with some level of honors.

His uncle sent him back to relatives in Tepic. Luis considered college. A school official helped him conclude he had no money. How about a job? He tested well and was hired as a beginning elementary teacher, rural community, little school, bottom rung of the educational ladder.

By the grace of God, Luis Alberto Martinez Gomez was assigned to San Quintin, the school recently adopted by an old gringo, Edd Bissell, and his generous American friends. They were on a do-good upgrade crusade, buying books and desks and floor tile and water dispenser and better lights overhead.

Teaching was still a poor man’s job. Luis slept on the school floor. Community parents provided food. Pay was 800 pesos per month plus eventual free college tuition if he survived, a year and a quarter bonus for a year of work.

Because Luis was a willing worker, could speak English and had a positive personality, Bissell adopted him. Luis became a partner in school improvements. Bissell introduced him to friends from the high-rent district. He offered weekend escapes, social events, cultural experiences, dinners in restaurants with cloth napkins.

The retired pharmacist gave the young teacher the growth plan he had once used as a student: live within your means, always say thank you for favors, listen and learn something every day, introduce yourself, my name is Luis, shake hands firmly, look people in the eye, establish contacts, open your mind to a variety of interests, put all agreements in writing, ask questions of old people, they have already made all the mistakes.

Bissell’s bottom line: Don’t dare disappoint me! Don’t even think about it.

Luis was an outstanding first-year teacher. The little school zoomed upward in academic ratings. State officials noticed. Luis had a better job this year. He is saving pesos and taking preliminary college courses. He talked about becoming a doctor. He now wants to be a lawyer, assisting Americans in the Mexico legal maze. By this time next year, his goal may be merchant chief. 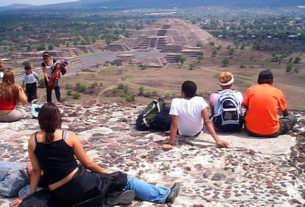