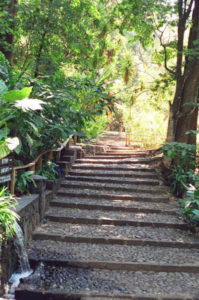 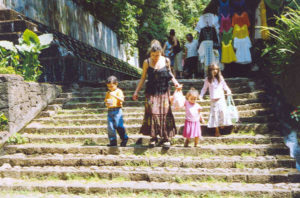 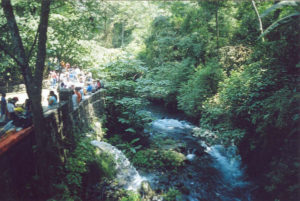 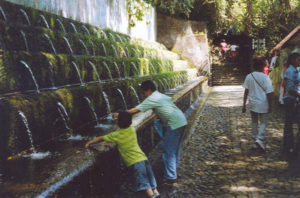 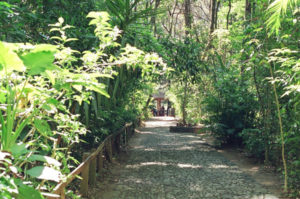 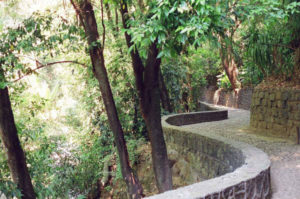 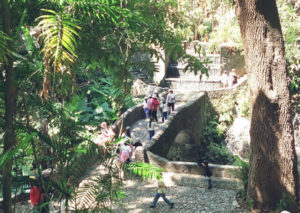 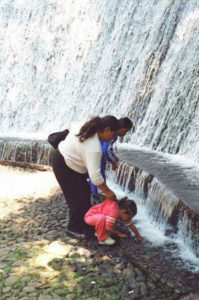 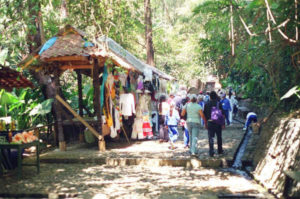 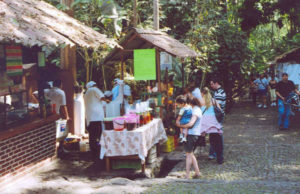 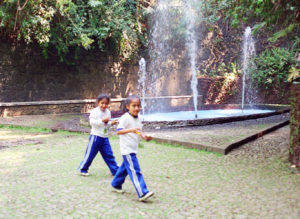 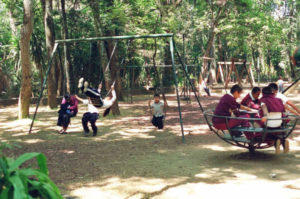 The paths are riddled with streams of water that exhale their sweet musty breath as they descend toward the river; the forest is bathed in a powerful mist, emboldened by its fragility where the thunder of rushing water courses through the consciousness of an eternal dawn.

The moment you enter Cupatitzio Gorge National Park in Uruapan, you see a stream of water rushing from the ground through a fountain where it then descends, bounces, crawls its way back to earth before coming to rest in a quiet pool. An African tulip tree, dotted with flaming orange blossoms and glitters of sunlight, leans over the terracotta roof of an office building; blooms the color of resplendent sunsets on a thick vine seem to hover around a palm as if contemplating strangulation, but the palm tree shows no sign of resignation, instead standing high in the tall forest that dwarfs the visitors passing below.

Broad stone pathways, lined by a green wall of ferns, palms, and spindly coffee bushes heavy with dark red fruit, wind their way through the forest. Splashes of purple blooms covering the trees fall to earth, visual manifestations of the water beneath their clown-like gaze. Elephant ears open wide as if appealing for handouts. The trails are frequently perforated by gazebos selling coffee, hot chocolate, cups of fruit, quesadillas with pumpkin flowers, chicken enchiladas, tortas, and cold drinks – raspadas flavored with tamarind, pineapple, mango or jamaica. Signs indicate where the tour begins and advise you to keep your ticket in the event someone asks to see it, though no one has ever asked me.

The paths are riddled with streams of water that exhale their sweet musty breath as they descend toward the river; the forest is bathed in a powerful mist, emboldened by its fragility where the thunder of rushing water courses through the consciousness of an eternal dawn.

The people who constructed the elaborate stone walls and pathways were true artists, harnessing the water into a series of exhibitions: water shoots in tiny loops through a wide series of steps, crashes over rocks, pours gently down walls, rises into elegant fans, rushes, screams, gallivants down narrow corridors.

At an area called Arcoiris, three plumes of water spew into the air, creating a portal for a wandering rainbow to make its appearance in the thin vapor; shimmering colors reach in a slow arch toward a tangle of blackberry vines hanging over a stone wall. A little girl stops and gazes at the spectacle and then leans forward, hands open in frantic delight, her jet black ponytail whipping about her face as she rushes to the other side, her wondering nervous black eyes wide and quivering for a moment as she assimilates the vision into her growing palette of experiences. Spent with the fatigue of thunderous excitement, her delight seems to creep into an approaching family that crowds around the event and then takes a picture.

Nothing is more appealing than the work of nature – she’s shown a beautiful side of herself, carving the gorge through this timeless forest. Plunging now into the river, the water boils up in balls of white foam charging toward the bottom before turning a delicious blue. On a good day you might find a few restless, daring souls willing to challenge the river by diving from a gazebo. Take a little time to ponder the river, and you might notice the gaunt fingers of a tree caressing a framed picture of the Virgin Mary someone has entrusted to its care.

Nature has entrusted a fragment of herself in this very spiritual place, where a deepening of consciousness is made possible by the laughter and hidden virtues of life and purity and the will to dream.

Facing the Huatapera in Plaza Morelos, turn left onto Calle Emilio Carranza. Keep walking until you can’t go any further, then turn right. You’ll see the park across the street. 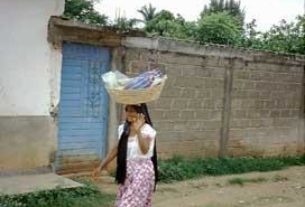