Bordering on the Pacific Ocean, and nestled up against against Jalisco and Michoacan, the small state of Colima enjoys the best of both culinary worlds: the ocean’s bounty of fresh seafood, and the typical ranch dishes of Western Mexico. In addition, it boasts a legacy of over 3,000 years of continuous civilization, and the attendant deeply-rooted food traditions that go with this heritage.

First inhabited by a group of Olmec people, it was also home to Nahuatl, Toltec and Chichimec cultures before being dominated by Tarascans, the principal culture when the Spaniards arrived during Cortes’ Pacific campaign, beginning in 1522. The shaft tombs and artistically crafted pottery, known as Colima ceramics, are evidence of a rich and flourishing culture. The famous perros cebados, the ancient, round little clay dogs which were discovered in abundance in the area, are said by some to have been a food source.

Whether or not that is true, there is certainly enough variety of regional food in Colima that these canines are not missed at meal time.

The Fuego Volcano, currently going through a period of intense activity, was an important factor in the settlement of the region, since ancient people found a supply of fresh water running down its slopes. The Spaniards also took advantage of the proximity of the volcano, planting sugar cane, which thrives in volcanic soil.

In addition to sugar plantations, much of largely rural Colima is covered with plantations of coffee, bananas, avocado, limes, tomatoes and tropical varieties of fruit such as mango, mamey, tamarind and coconut. Many of these are used to make the typical Colima beverages and candies.

Cocada, a coconut candy, dulce de tamarindo, dried candied bananas and alfajores de piña are some of the most well-known regional sweets. Tuba, a mildly alcoholic drink made from palm sap, and tejuino, a fermented corn drink, are popular beverages, along with bate, a thick drink made with chia-like seeds, and the ponches of fermented maguey that come in fruit flavors. Ponche de grenada, pomegranate punch, is the most well-known, but tamarind and guava are also used.

Vendors of these drinks and candies are easy to find in the shady parks of the capital city, also called Colima. An inland, tropical town of small squares and gardens, Colima has a lovely central plaza surrounded by restaurants offering regional favorites such as tatemado, a dish made with pork which has been marinated in coconut vinegar and stewed; cuachala, a corn-based dish with ancient origins, and chilayo, a pork and vegetable stew. The Western Mexican staples of birria, a spicy goat stew, and pozole, a pork and hominy stew, reflect the proximity of Jalisco.

The coastal city of Manzanillo, on the other hand, features fish and shellfish, and is a seafood lover’s paradise. Once, after a particularly long, hot journey, we went right to a dockside restaurant and nearly inhaled a couple of the large, refreshing shrimp cocktails, followed by grilled red snapper. The food was so fresh and good, we were tempted to order ceviche for dessert, but waited until the next day to try the ceviche de pescado ahumado, the smoked fish ceviche that is a local specialty. The largest port on the west coast of Mexico is also known for it’s sailfish and swordfish, with fishing tournaments held in February and November attracting sportfishermen and tourists alike. Perhaps because of this, its restaurants are of particularly high quality, offering a selection to suit various budgets and tastes, from five-course dinners to tasty street snacks.

Best known for street snacks is the town of Comalá, the ancient settlement once called Ajuchitán, but now named after the Mexican cooking utensil on which most of the corn-based botanas are prepared, the comal. Derived from the Nahuatl comalli, the town’s name literally means “place of the comal“, and it does a wonderful job of living up to it. The sopitos, small tortillas covered with tender, tasty shredded meat, are delicious, as are the local fresh cheeses that top them. Visitors to the capital city of Colima, only six miles away, are well advised to make the short side trip to Comalá and enjoy some delicious examples of the area’s cuisine.

The following recipes are for dishes not found in many other parts of Mexico, and reflect a simple, yet creative use of local ingredients. They are surprisingly easy to duplicate at home, even if your home is a city apartment rather than a tropical fruit plantation. 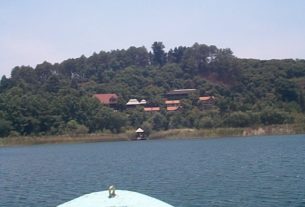 Ajijic: the way we were