HURDLE THE LANGUAGE BARRIER – by learning Latin American hand and voice signals. These vary from one culture to another. The following are distinctly LATINO:

THE WAGGING FINGER – is the way to say no, definitely and finally. No one questions this dignified and simple way of saying “NO”. Just move the index finger of either hand from right to left.

The wig-wag of the finger is an important part of Latino every day life. The Latino women have developed it into a fine art as they move their index finger independently from the rest of the hand.

Everywhere you go, on the street, in stores and markets, you will see the wig-wag. Stopped at a red light, the lady behind the car window wig-wags at an approaching salesman. Through the street window at home, on the plaza….anywhere that supersalesmen abound…you will find wig-wagging. Have you wig-wagged today? If you haven’t tried it yet, do so! You’ll like it!

PSST! – On the American stage and class B movies, in by-gone days, the villain identified himself when he surreptitiously summoned the heroine thusly.

The “Pssst!” is a polite way of saying, “Come here, please.” You can use it at football games to summon the torta (sandwich) man, or, from your window to bring the scissor grinder to your door. “Pssst!” always gets the attention of the person wanted and no one else pays attention.

ARM SIGNALS – to hail a bus or taxi to stop, raise your arm straight out at a 45 degree angle from your body. You can stand on your head, or do the funky chicken until you’re blue in the face, but this is the only signal they respond to.

THUMPING SIGNALS – One thump means “GO!”; two thumps means “Whoa!”. Thumping is used in many ways to help drivers of trucks and busses as they maneuver, in, out, back and through traffic and tight places. The thumping may be done by the driver’s helper from a runway on the back of the truck, to guide him in backing. Or, on a crowded passenger bus, when people are getting on and off the bus from the rear door, passengers in the rear may guide the driver in the same way, to let him know that everyone is safely on (or off) the bus.

If no bell is available to ring for your stop, two thumps also lets the driver know that someone wants to get off. If he doesn’t stop, one must revert to yelling ” Bajan!” (pronounced BA-han), literally meaning “they are getting off”), This is a crude, but the most polite and effective manner to call his attention; yelling in public is not considered polite, but in this case, since you are putting the blame for having to yell in public on a third person (they), it is acceptable.

AHORITA – means right now! It is the smallest length of time in which anything can be done and usually accompanied by a hand signal. This is done by holding the thumb and forefinger with a space of about one inch between them. The space may vary as the shortest length of time expands and contracts.

The ahorita hand signal is widely used by drivers in situations on narrow streets. The driver in front of you will stop and give the ahorita sign to the car behind him. The space between the thumb and forefinger depends on how long he intends to hold traffic while he goes about his business of unloading passengers or cargo.

The driver’s ahorita may last from one to five minutes, and meantime, he turns a deaf ear to the wild horn-blowing behind him. While the policia understands his ahorita signal, other drivers toot and toot, and the tooting has a meaning all its own. Depending on the consecutive number of toots, a whole dictionary of swear words can be recited. A five-toot is the worst of all Spanish oaths. Where in the world can you find cursing more colorful?

MAÑANA – a courteous way of never saying no without committing oneself to say “yes.” “When will you finish cleaning the tinaco (water tank), Hilarioso?”

Hilarioso shows up a week later. He works a couple of hours and promises to return mañana por la mañana (tomorrow in the morning), or, if that proves impossible, pasado mañana (the day after tomorrow).

His reasons of dalliance are many. Half of the Latino calendar is marked with fiestas. And, fiestas come first. There are holidays, saint’s days, national holidays, pueblo holidays. Lots of fiestas and they always come first!

MI CASA ES SU CASA – (my house is your house) is the ultimate in Latin courtesy. it should not be taken literally and you must not pack your suitcase and expect to move in.

This expression is used so automatically it is practically devoid of meaning except to convey a feeling that you are welcome. Latin courtesy is a highly refined art, of which exaggeration is a part.

For example, shaking hands involves a few nice exchanges: buenos días in the morning, buenas tardes until dark, buenas noches after dark. Cómo está usted? How are you? and other concerns about your health starts off even business conversations. There is no hurry in Latin America.

The Latin abrazo embrace is performed every time you meet. The ladies touch cheeks while giving a small abrazo. Men, however, give a hearty abrazo and thump each other with great gusto every time they meet. This act between men is not considered effeminate; it shows real feeling.

SMILES – The face of Mexico is a happy one. The best way to show your good-will is to smile. You’ll always get one back.

GRACIAS – This Spanish word for thank you comes from the heart. “Muchas gracias”, or, many thanks comes first. “Muchísimas gracias“, or, thanks a great deal is next. Finally, “Mil gracias”, or a thousand thanks. When it is spoken, notice the warm light in the Mexican’s eyes…you have a friendship that will last forever.

ADIOS! means more than good-bye. This customary Spanish word for “good-bye” means “Go with God”…don’t journey on by yourself…walk with God. The original Spanish phrase, “Vaya con Dios” was shortened to “Adios”. You will hear Mexicans using it in passing on the street, instead of “Hola”, hello. It is a sincere wish that all goes well with you until you meet again. Adios!

This article originally appeared in “Mexico Living and Travel Update”, Summer 1995,
and is presented here with their kind permission. 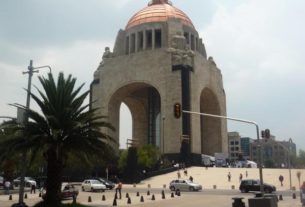