At this time of year, when the weather turns cool and the holidays approach, the kitchen seems to beckon more strongly than ever, and those of us who love to cook begin to think of ingredients to incorporate into the season’s festive fare. One of my favorites is the pear, whose iconic shape, subtle sweetness and beguiling aroma make it one of the world’s most beloved fruits.

There may not be any partridges in Mexican pear trees, but their fruit is perfect for a variety of celebratory dishes, and gets put to excellent culinary use in myriad regional specialties, from main dishes to desserts and even wine.

My trusty Larousse de la Cocina Mexicana, an invaluable reference book of Mexican ingredients, assures me, in its month-by-month produce chart, that good quality pears are abundant now. Good, because I plan on using them in several ways, including a winter fruit version of the mole called manchamanteles, with pears and apples instead of pineapples, and sweet potatoes in place of plantains. A pear flan and pear empanadas are also on my list, and maybe a version of tamales dulces that incorporates diced pears right into the masa.

A member of the rose family, along with apples, apricots, peaches, plums and several other fruits, the pear has been cultivated since around 5,000 BC in China. In Europe, references to pear cultivation are found in Greek and Roman writing. In the 1st century AD, Roman naturalist Pliny the Elder referred to the grafting of pears, and in the Odyssey, the Greek poet Homer called the pear a “gift of the gods.”

Brought to Mexico by the Spanish missionaries, pears were grown in the mission orchards of the cooler regions. Needing a dormant period of cold weather during winter months in order to blossom, pear trees do best in Chihuahua and in the Sierra Norte of Puebla, where they are grown in the Bocasierra region, with its cool winter climate. The town of Jicolapa, part of the municipality of Zacatlán, produces pear wine, popular with visitors to the region.

The demand for pears in Mexico has grown steadily, to far outweigh its production, and Mexico is the number one consumer of US exported pears. The total market for pears in Mexico reaches about 107,000 tons per year on average. That’s a lot of pears, less than half of what is produced domestically. However, I prefer the flavor of Mexican pears, especially the less cosmetically perfect ones from the Sierra Norte.

Pears are a good source of dietary fiber and vitamin C, as well as the antioxidants beta-carotene and lutein. They are rich in anti-inflammatory flavonoids, less allergenic than most other fruits, and one of the most easily digested. An ongoing Nurses Health Study has shown pears to help lower the risk of type 2 diabetes.

When buying, look for pears that are firm but not too hard, free of bruises or mold, with no punctures or dark soft spots. They can be bought hard and ripened at room temperature. After ripening, pears can be stored in the refrigerator for a few days. For maximum fiber benefits, leave them unpeeled if eating them raw, but peel them if they are to be cooked, since the skin has a tendency to turn leathery when cooked.

Pears are good in salads, and can be poached, baked, incorporated into a variety of desserts, or used in savory dishes such as chiles en nogada, the Central Mexican style meat stew called puchero, or braised meat dishes. Try using pears in fruit salsa, a good accompaniment to the season’s roasted meats, or in fruit empanadas. When I taught at the downtown Puebla campus of the state university, one of my favorite stops on the way home was a bakery that made specialties of Zacatlán, a fruit growing region in the Sierra, where pears, apples, and blueberries are used to fill fruit empanadas.

The following recipes represent the versatility of this fragrant fruit. Try one or two during this holiday season. 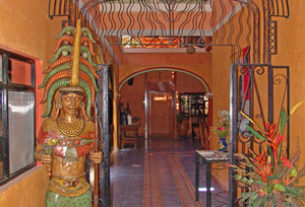 2 thoughts on “Mexican pears: A seasonal favorite for holiday dishes”