Here’s a key phrase to memorize before heading to Mexico.

Whenever a waiter answers this question with, “Sí señora,” I’m forewarned. In the first bite, my mouth will erupt with the combustible spices and chiles on which Mexicans flourish.

“To us, food has to be spicy to be good,” says Lula Bertran, Mexico’s leading food consultant, author, and food writer. “Our palates don’t taste bland food.”

Although Mexican rivals Italian as the most popular ethnic cuisine in the United States, most of what is served north of the border is a popularized version of Mexican “street” food: tacos, tamales and burritos.

Actually, Mexican cuisine includes dozens of regional styles, from complex flavors of the seven different Oaxacan mole sauces (blended from as many as 25 different herbs and spices) to the robust carne asada (grilled steaks) of the northern haciendas.

Despite the rich heritage of mexican foods, Bertran observed that “until the mid-1700’s, hostesses always served French or perhaps Spanish food when they really wanted to entertain.”

“As for dining out,” she says, “you literally couldn’t find a sophisticated restaurant anywhere in the capital that served anything except French foods or ‘international’ cuisine, which means nothing. Even today, only three or four top restaurants in Mexico City serve a few local dishes.”

In this decade the situation has begun to change, in part because imported ingredients have become so expensive, as editor and editorial advisor to the country’s two leading food magazines.

In a country where Diet Cokes are still not readily available, it should be no surprise that “nouvelle” or “spa” cuisine hasn’t begun to make inroads.

“Very few Mexicans are worried about cholesterol,” admits Bertran. “Our cooking is based on pork lard. That’s what I prefer. There’s absolutely no interest in cooking with less grease.”

What then about Tex-Mex food?

“It should be called ‘Texan’.” says Bertran emphatically. “It bears no resemblance to Mexican cooking in its presentation, combinations, or even its flavor.”

Bertran’s recommendations for Mexican cook-books are:

This article originally appeared in “Mexico Living and Travel Update”, Summer 1994,
and is presented here with their kind permission. 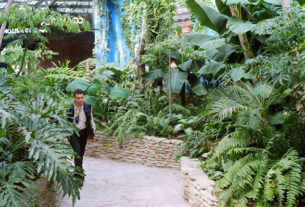