Photo Gallery: Morelos' Exotic Foods For The Brave At Heart 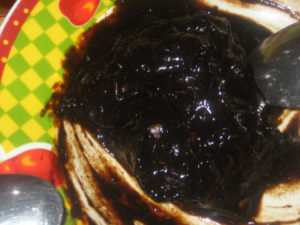 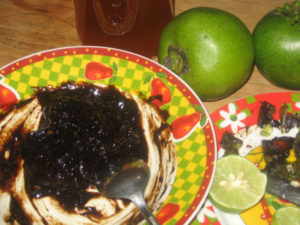 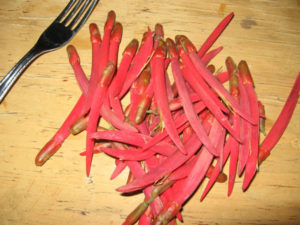 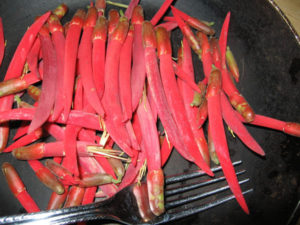 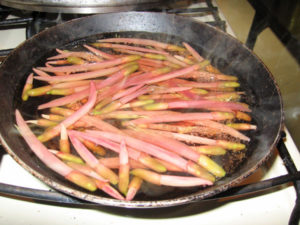 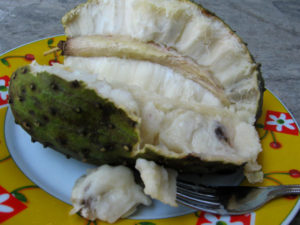 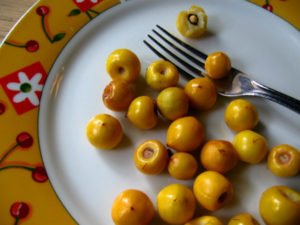 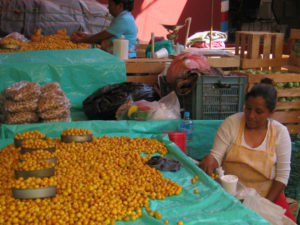 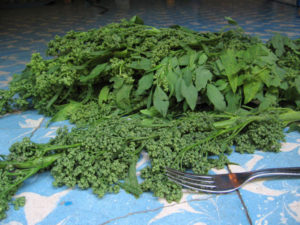 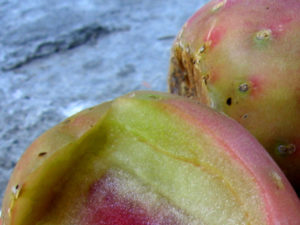 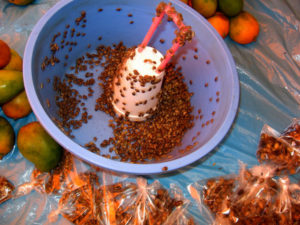 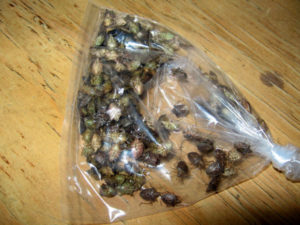 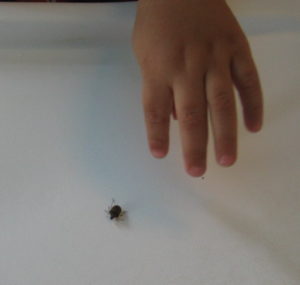 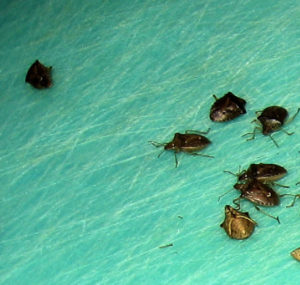 A variety of traditional foods that formed part of the pre-Hispanic palette are still available in Morelos today. Adventurous tasting makes traveling more fun so I encourage you to sample them as part of any trip to Morelos. Most of the foods are easier to eat than pronounce so don’t be scared off by their names.

Zapote Negro with Honey and Lemon

Let’s start with a bowl of zapote negro (pronounced “sap-o-tay neg-ro”) with honey and lemon. It looks like hot tar, but tastes refreshing. You can purchase it at most fruit stands and markets that sell a variety of fruits. Choose one that is green and barely soft to the touch, almost like the way you would choose an avocado.

For best results, place zapote negro on a shelf to finish ripening. Wait about a day and the skin will become slightly wrinkly. Gently peel the paper-thin skin off of the flesh. This is a messy job so be armed with plenty of paper towels. Some of the spongy green layer under the skin will also be removed, but don’t worry about that, just try to be as soft-handed as possible. Place your peeled zapote into a bowl and gently “chop” it with a spoon. You will notice seeds inside the flesh, but just leave them there. Drip about a tablespoon of lemon juice and a teaspoon of honey over the fruit and stir until it is well mixed. Don’t overdo the honey, or the refreshing flavor will be masked. Eat with a spoon, sucking the seeds clean and spitting them out. Have plenty of spoons on hand because everyone will fall in love with the flavor. It will be gone in a flash.

The prehistoric looking guanabana (pronounced “oo-a-nah-bah-nah”) is fun to pick at with your fingers. You can purchase it at most fruit stands and markets that sell a variety of fruits. Choose one that is still firm and not cracked open. It should be slightly flexible when you squeeze it gently. To eat, break the fruit open using two hands, exposing the moist, fibrous, white flesh. Use your fingers to grab chunks and pull them away from the skin. Put bite-sized “chunks” into your mouth and separate the smooth seeds from the flesh with your tongue. Spit out the seed and enjoy the flesh.

Guanabana is often used in one of Mexico’s delectable sorbets, called nieve. When buying hand-made ice cream, ask for a taste of guanabana. Be prepared to fall in love, but watch out for ice-cream-headache. Guanabana ice cream always seems to be ten degrees colder than others.

Nanches Taste better than they Smell

Nanches (pronounced “nan-cheeze”) are small, very smelly, yellow fruits. It takes a little practice to get past the strong fermented odor they give off.

You can buy nanches in larger markets where fruits are sold. They are usually heaped onto a table-like display near other fruit stands. They are measured by heaping them into a sardine can. You buy them by the sardina, so decide if you want one or two sardinas.

To eat, just rinse in clean water or soak in water with disinfecting drops and pop one in your mouth. Use your teeth to remove the flesh from the pit and spit out the pit.

Nanches are also used in making ice cream. Even if you don’t like plain nanches, you still might like them in ice cream so give it a try.

Xoconostle (pronounced “cho-co-noh-s-tle”) is a cactus fruit that is so sour it is sometimes prepared more like a vegetable. In fact, in Náhuatl, xoconostle means tuna agria or sour cactus fruit. The best xoconostle I’ve ever tried was in a bean dish with chorizo (a spicy sausage), a little like north American chili. It is also prepared in jellies and traditional candies.

Trying these fruits will be a challenge because they aren’t commonly used in restaurants. One way to get to taste them is to make friends with someone who runs a small restaurant, called a fonda. Ask the cook if she knows any recipes that call for xoconostle. If she has a good one, you can tell her that you would like to try this traditional food and ask her if she would be willing to prepare a special dish for you. You can agree on a price (she may want the money up front to purchase the ingredients) and a day for your taste sensation.

Colorines Add a Splash of Red to Your Eggs

Colorines (pronounced “co-lo-reen-ays”) are red flowers that bloom during the dry season (March) on trees in Morelos. They look astounding, like bloody claws on the tips of the tree’s bare branches. People use bags on the end of long poles to collect the flowers. They are sold – usually by native women – by the sardina in larger markets. They might be hard to spot because they are sold in small quantities and the people who sell them are often set up with a small display on the ground.

To prepare these, first you boil or steam them. Once cooked, they taste like asparagus. Then you chop them and use them in scrambled eggs. It’s easy, fun and delicious.

Huauzontle (pronounced “oo-auh-so-n-tle”) is a traditional Mexican crop found throughout Mexico, but is most commonly enjoyed in central Mexico. According to Wikipedia, before the arrival of the Spanish, it was one of the most important agricultural products. In fact some tribes paid their tribute to the Aztec empire in the form of huauzontle. When the Spanish took control, they outlawed its consumption and cultivation and it survived in remote pockets of Mexico. Huauzontle is a super-food because it has a high nutritional content and is resistant to cold, dry climates.

The leaves, branches, flowers, and seeds are all edible. Generally, huauzontle is steamed or boiled. It combines well with salty cheeses. The recipe commonly used for it in Cuernavaca is similar to the one for chiles rellenos. Small huauzontle branches are bunched together and tied around a hunk of salty cheese. Next, they are covered in beaten egg and fried. Finally, they are simmered in a spicy tomato sauce. They are a little on the messy side to eat, but the flavor makes them worth it. Huauzontle may look a little like broccoli, but it doesn’t taste like it. It has a likeable taste all its own, pleasing to almost everyone.

If you look at the menus of various fondas and restaurants, you are sure to find huauzontle on the menu. Don’t pass it up.

Jumiles – Definitely for the Brave at Heart

Jumiles (pronounced “who-meel-ays”) are edible insects that live in the forests of Morelos and Guerrero. You can purchase them in larger markets, usually in the area where native people sell their products. They are displayed climbing on a tower in a bowl created by inverting a Styrofoam cup in a bowl. When you purchase them they will come in a plastic bag with air holes in it.

You can eat them plain (meaning live), but they might knock your socks off with their strong acidic flavor. (No, you can’t feel them crawling around in your stomach.) You should try them “plain” just once in your life so that you’ll know in your heart that you’ve done it all. You can eat them toasted, but then they lose their flavor and are just crunchy. They add a wonderful flare to salsas, so I recommend that you try them that way. (See the references below for some recipes and a story about finding jumiles in the forest.)

Then, when you are telling others about your wonderful trip to Morelos, you can mention that you’ve eaten stinkbugs. Now that’ll be something to be proud of. 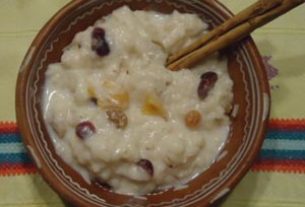