The Anglos of San Miguel remind me of the frog that happily swims round and round in a pot of cold water, brought so slowly to a boil, that he doesn’t recognize his demise until it’s too late. They still live in “cool” San Miguel, and fail to register the rising destruction of their paradise.
Journal, June 11

Is it because Americans must have an idyllic place to go? Is this why we persist in describing San Miguel as “picturesque, colonial and tranquil?” Not that it isn’t these things on some days in some places. (A back alley at 3:00 a.m.?) But as someone who has traveled many years, had many sojourns throughout Mexico and Central America, this hardly tells the San Miguel de Allende story. Her story might better begin as a once quaint little town, declared a National Monument in 1926, now grown to a population of around 50,000 people. One fifth of whom are Americans.

My fresh eyes witnessed a San Miguel that is a setting for international arts, a playground for those who seek creative haven amidst stunning ancient architecture. Very narrow streets and steep hills are her charm. Sidewalks so narrow that to meet someone is to have to step into the street. What SMA isn’t, is a community sculpted and defined by its natives. Witness the Plaza. Here I am, off-season. Temps are moderate, sporadic rains have arrived. Every bench around the good-sized square is filled with gringos. It is as if I’ve stepped into “Mexico-land” at Disney World. Folks lazing, reading English newspapers. Sipping lattes. Gringo chic.

Meanwhile, the charming, narrow cobblestone streets become choked with fumes. Commonplace Lincoln Navigators appear around corners like escapees from a 50’s Japanese monster flick. Sidewalks are not filled with smiles and native families holding hands. They are filled with buzz and chatter and high-heeled art dealers.

Whether or not you like San Miguel de Allende depends on why you come to Mexico. If you seek a place filled with visiting American dancers and painters where U.S. citizens and conveniences abound, you will like SMA. Like Santa Fe in Nuevo Mexico, SMA is Old Mexico’s art community. Two weeks of chamber music in mid-summer. Instituto Allende for Spanish classes or literature. Belles Artes enchants … ballerinas and printmakers wind through her gardens. National Institute of Fine Arts offers classes in painting, dance and music. Colorful murals wrap walls.

Besides the moderate mountain weather, there is endless shopping to delight. Restaurants, bars and coffee shops flourish, but aren’t cheap. Neither is real estate: we found houses two and three times more expensive than comparable properties on other ex-pat stops. As in other ex-pat towns, oldsters who could no longer negotiate the hills and streets were opting to leave town. Our realtor, in his search for his own piece of property, sent out a Mexican man to do his looking and bargaining. I suggest anyone else do the same. He knew how to find a bargain and to how gain access to otherwise not-for-sale-properties.

The food? It was great! One just-off-the-plaza bistro served up scrumptious calamari, shrimp, margaritas and wine, as a middle-aged gringo woman bemoaned the exit of her lover. We did not witness any of the myriad fiestas of San Miguel. Celtic Week, Holy Week (Easter), Sanmiguelada (running of the bulls). I think I’d really enjoy Fiesta de San Antonia de Padua, when “Los Locos” parade through the streets amidst music and floats. SMA loves her celebrations. She has many. No doubt these are the times when she births new life.

Should the plaza become, you know, a little “old”, you can travel ten minutes north of town to the Las Puertas development, where soon you can tee off on the Jack Nicklaus golf course, soak in the world class spa or spread your thighs and climb upon a horse at the equestrian center. Our realtor was hot to show us this one. In other words, SMA makes it easy to be in Mexico, and not be OF Mexico.

Ironic. I had done more research on SMA than any other destination on this trip. I was prepared to be charmed. Grabbed by the scruff of the neck with a “move here!” shake. It didn’t happen.

The delightful old woman who ran our Bed and Breakfast, from one of the oldest families in SMA, asked me one day how I liked “her city.” A sadness came over her, as she described her scenic streets, arteries originally sculpted for burros and horses as thoroughfares for the markets, now noisily clogged with modernity. “It’s changed,” she said, as she lowered her head. “We don’t know what to do.”

The water gets hotter and some frogs notice. Like Santa Fe to the north, SMA is a victim of its own charm. Once a quiet Mexican haven for American artists, now she plays host to rich retirees. Several people I met who have lived here for years recently put their houses on the market in search of quieter, more authentic Mexican domains. Where the air is not toxic and eyes don’t water. They will move to places that resemble SMA when they first moved there. Other Americans will buy their houses and believe their choice to be the adventure of their lives. 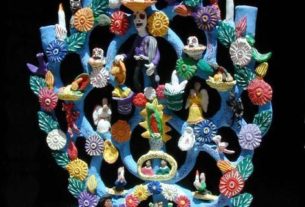