“Inventory of housing” were words I didn’t understand very well – until a friend from the U.S. asked me to find him an inexpensive old “fixer-upper” in this colonial city. He’s an environmentalist so I knew he would want something simple – and I knew he would be thrilled with Mexico’s low cost of repairs. 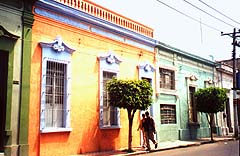 The cheapest old housing is in the city center. These homes have no lawns. They don’t even have so much as a flowerpot in a window. Unless they’ve been painted they’re just plain ugly. Their front walls come out to the sidewalk and their side walls are shared with the neighbors’ walls on each side.

But for hundreds of years this was the house of choice for Mexicans. It’s a modification of the Arab-Andalusian design, brought over from Spain, which is perhaps the most successful home design in the last millennium. They’re still being built in small towns. With care they can last many generations.

But holy smokes! they aren’t very cheap! and they aren’t very small! They are deep, reaching lengthwise to the middle of the block and even the smallest and narrowest of them have three or four bedrooms, kitchen, dining room, and two enclosed patios.

This design is famous for its “great houses” which are now often turned into museums. About five of these 18th century beauties take up the frontage of a whole city block, lined up side by side. Few are now used for homes, but their tall windows with heavily barred grates give away their original use. They can cost a dineral – big bucks – to fix up.

Since a “great house” which has been converted into a small museum is the architectural example that visitors are most likely to see, we’ll try to capture some of their elegance: A doorway on the street leads to a rather dark passageway, called the zaguan. Its darkness is relative to the brilliant light perceived through the cancel, an elaborately wrought interior iron door. Entering, you find yourself at the principal patio and discover the light that floods the interior comes from a large roof opening directly over the patio. 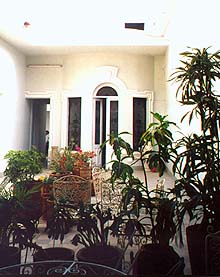 Great arches catch your eye, made of rose sandstone trimmed with smooth gray limestone and highlighted by cartouches of white plaster. They support the upper structures, including a short roof to protect from rain the walkway around the patio.

The rooms used by the family are spotted around the patio – the bedrooms, sitting rooms, studies, sewing rooms, libraries, formal reception rooms and perhaps two dining rooms in a really large house. The kitchen is always directly at the back of the house in this ancient design. Beside the kitchen a short walkway connects to a smaller patio, the traspatio, and more light and air enter through it. The work of the house is done here and servants’ quarters are at two sides.

There are few “great houses” from the 1700’s like these in the city’s “inventory.” Their reconstruction and painting has to be in strict compliance with the wishes of the city’s historical commission – and their requirements border on fanaticism.

But the home my friend chose, although it may be as old, is in a completely different category. There are hundreds – perhaps a thousand – like it, making the “inventory” of them very large and therefore less strictly regulated.

It’s a smaller version of the “great house” design. Mainly, it’s just narrower. The neighbor’s wall appropriates all the rooms a “great house” would ordinarily have on the East side of the patio. The patio is therefore smaller, but still very attractive. He has four rooms around the patio, one in the servants’ area, plus dining room and kitchen. Of course, since the design never changed over hundreds of years, it’s impossible to tell how old it is and the best guess he has been given is 150 years.

These homes are normally about seventeen feet high, probably to achieve an optimum roof opening above the patio to allow the most sunlight. As in the United States at the same period, long narrow windows were the vogue.

My friend replaced the roof timbers. As a precaution, he tore out the clay roof drains than are buried in the wall on either side of the door. If they break, the adobe wall gets soaked, turns to mud, and collapses. He used PVC pipe for the replacement.

He’s pleased with adobe construction for its soundproofing qualities – but admits that sharing walls with neighbors makes for dark rooms. The only English-speakers he’s encountered in the neighborhood are Mexican couples who worked for years in the United States. They’ve translated for him, invited him to parties, and like to gossip about their experiences in the States with him.

His neighbors, he finds, have very nice furniture and they even own one appliance he rejects: a clothes-washing machine (wasteful of energy and water, he tells me). Since nobody can look into his house – and since he’s a devoted environmentalist – he’s devising a way to dump his used bath water and dish water on the patio (environmentally sound, he tells me).

My friend located his dream house by asking at tiendas – little stores – in the neighborhood, if anything was for sale. He has since checked in the pueblos and finds they are much cheaper.

Taking the “waters” in Mexico