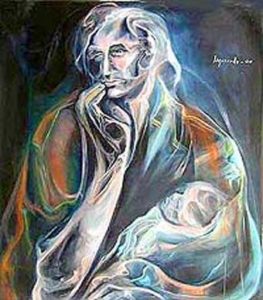 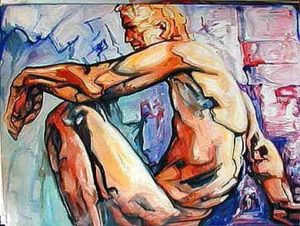 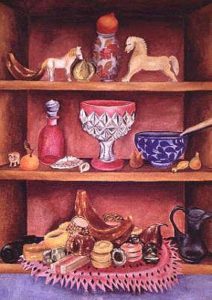 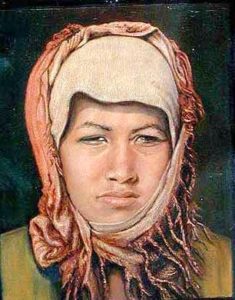 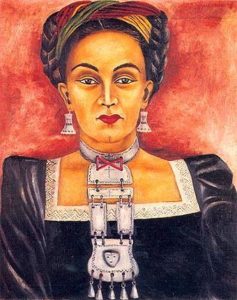 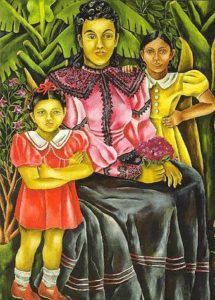 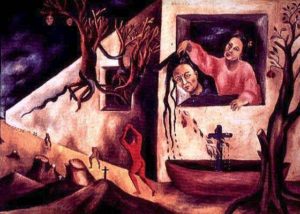 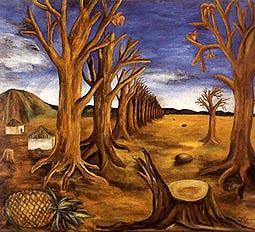 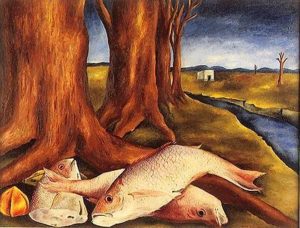 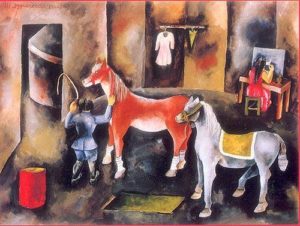 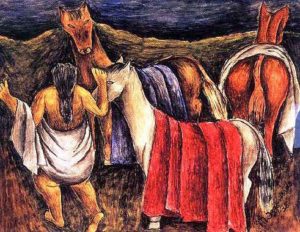 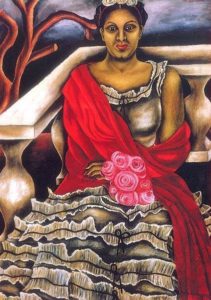 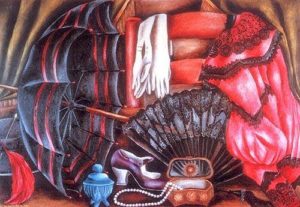 On October 25, 2002, one hundred years after her birth , the Mexican painter Maria Izquierdo was declared a Monumento Artistico de la Nación by Mexico City’s National Commission for Arts and Culture. This guarantees that her work will be protected, catalogued, studied, and conserved to ensure that her legacy will be there for future generations. With this honor she takes her rightful place among other great painters of her time – Jose Clemente Orozco, David Alfaro Siquieros, Dr. Atl, and Frida Kahlo.

The Mexican poet, Octavio Paz, wrote that the day one writes the real history of Mexican painting of the twentieth century, the name of Maria Izquierdo will be a small but powerful center of magnetic radiation. Vigorous strokes, strong color and texture, and a world of primitivism and dreams – so typically Mexican, yet so universal in expression – are Izquierdo’s strengths.

Her skillful handling of rich, luscious color and the masterful control she has of her personal vision were evident in an exhibition I saw recently at the Instituto Cultural Cabanas in Guadalajara. The show celebrated her new status as a national treasure and included a selection of watercolors, oils, and gouaches. Sad to say, many of her well-known works were not there because of a boycott by disgruntled collectors unhappy about the fact that her artwork can no longer leave the country without government approval.

Even with the 27 pieces that were there, you could feel the hypnotic sensuality of her visionary world. Her work creates an intimacy that pulls you into the paintings and leaves you with a dreamy nostalgia and a subtle feeling of unrest. Her people and still lifes appear bold and up front. But behind the obvious is something undefined – haunting, ephemeral. The strong colors have disquieting shadows. The figures of the children are odd, the shoulders exaggerated – just a bit.

Maria Cenobia Izquierdo was born in 1902 in San Juan de Los Lagos, which was then a small village in the state of Jalisco. She was raised by an aunt and grandmother who saw to it that little Maria would never miss a day of church . The strong influence of the church and her early perception of provincial life are evident in many of her paintings.

When Izquierdo was 14 years old, she was married off to an army colonel and produced 3 children in rapid succession. She did not enter the marriage willingly, and the role of wife and mother did nothing to alleviate the boredom she felt with her life. A family move to Mexico City in 1923 gave Izquierdo her first opportunity to attend a school of painting and sculpture.

In 1927 at the age of 25 she left her husband to study art full time at the Academy of San Carlos in Mexico City. During her brief stay at the Academy, she met Rufino Tamayo who was to become her lover and Diego Rivera who became her mentor. Both men had a profound influence on her life. Under Tamayo she studied watercolor and gouache, and through Rivera’s support, she was given her first important exhibition at the Galeria de Art Moderno in Mexico City in 1929.

In 1928, one year after she entered the Academy, her studies ended. Students were infuriated at the special attention Rivera gave her work at a student showing, and she was obliged to leave the school. Rivera was fired shortly after over the incident.

Izquierdo moved in with Tamayo the next year and lived with him for four years. Within those years, she discovered her style. Her work became imbued with the nuance of intimacy – a feeling of quiet personal communion between herself and the viewer. She claimed that art was a language that brought to light the hidden, and she strived for this in her paintings.

Her 20’s were years of rapid advancement in her flowering as an artist, and the public was not blind to this exceptional woman. She was the first Mexican woman to have a solo exhibition at the New York Art center in 1929. In 1930 she was included in an exhibition of Mexican painters at the Metropolitan Museum of Art in New York City and in 1931 at the Museum of Modern Art.

Around this same time, she became active in an avant-garde group that opposed the Muralists. The group proffered her work in opposition to the Muralists as the true representative of cultural nationalism, and they criticized the Muralists’ use of male dominance and power as a structural framework for defining national identity. Her involvement with the group may have sewn the seeds of a later altercation with her old mentor, Diego Rivera.

In 1936 Izquierdo attained international fame. She met the surrealist French poet, Antonin Artaud, who was captivated by her work. Thanks to his influence she obtained a showing in Paris. Artaud wrote in a Paris monthly review that the paintings of Maria Izquierdo were from the original Mexican soul that is without shame. “All of her paintings,” he said, ” are in this color of cold lava, as if in the semidarkness of a volcano.” The show was an outstanding success.

Later that year she showed in San Francisco and once more at the Museum of Modern Art in New York in a group show. When she showed again at the Palacio de Bellas Artes in Mexico City, the critics eulogized her as the best contemporary Mexican painter.

In 1944 she married a Chilean diplomat and undertook a trip to Chile as ambassador of Mexican arts. She was received by her old friend, Pablo Neruda, who wrote a touching tribute for the exhibition she had there. She was at the summit of her career as a Mexican woman painter.

Izquierdo’s paintings touched the sensibilities of poets and critics alike. In body and temperament she seemed like an extension of her work. The Mexican poet, Octavio Paz, captured this connection between woman and work when he wrote:. “Maria looked like a prehistoric goddess. Her face like mud dried by the sun…and smoky like copal incense. … but that woman with the terrible air of a prehistoric goddess was at the same time sweetness, shy, intimate.”

Friends described her as a woman of warmth and generosity, her home always open to the poets, painters, philosophers, writers, photographers, and intellectuals of the time – men and women who forged the culture of Mexico during the twentieth-century.

Her good friend, Ermilo Arbreu Gomez, enjoyed watching her paint. He and her daughters would stand in front of her latest work passing the colors she mixed on the canvas – colors such as toad green, shadow, burnt red or ochre – the colors of the earth. The daughters admired her and made sure there were no distractions while she painted.

In 1945, at the height of her career, the government commissioned Izquierdo to do a mural for a building in Mexico City. Rivera and Siquieros, two of Mexico’s great muralist painters, blocked her from getting the job. When she dared to denounce them in public, she received little help and a lot of strong criticism. She lost a lot of money, and her heart was broken.

Izquierdo began to experience nightmares that left her sleepless. One day, she arose and drew what she remembered… a clear vision of herself, in a window of metaphysical dimension, holding her own decapitated head as her body, still walking, becomes lost in the distance of steps leading to a void. That year, 1947, she painted Sueños y Pensamento, a premonitory painting that heralded great pain for her future. It was the last of her great works. (Recently, Sueños y Pensamento sold at Sotheby’s for $450,000.00 US)

The following year, 1948, Maria Izquierdo suffered a paralysis of the right side. She trained her left hand with enormous difficulty and painted her last 20 works, but she was never again able to produce the same caliber of work as before. She died in Mexico City in 1955.

In recent years there has been a resurgence of interest in her art. A new generation of Mexican painters such as Elena Climent owe a debt to her work which they gladly acknowledge. In a recent interview Climent said that although of a different time, Izquierdo dealt with things that are relevant and meaningful today. She talked about a freshness in Izquierdo’s work that isn’t found in many living painters today and a Mexican reality that is very much alive and regenerating.

In 1997 there was the first ever retrospective of her work in New York City, and since then her paintings have appeared in a number of shows in the U.S.A. and Canada. Thanks to the honor the Mexican government has bestowed on Maria Izquierdo, she will be restored to her rightful place in the history of Mexican art, and each succeeding generation will discover anew the extraordinary talent of this seemingly ordinary Tarascan Indian from a provincial Mexican village in the heart of Mexico.

Recommended reading: The True Poetry: The Art of Maria Izquierdo. By Elizabeth Ferrer, 1997 Available at Amazon in paperback.

Entered the Academia de San Carlos. Studied under Germán Gedovius and Manuel Toussaint, but her most profound influence was from Rufino Tamayo.

Exhibited for the first time at Galeria de Arte Moderno in Mexico City.

The French surrealist poet, Antonin Artaud, arrived in Mexico City. He was captivated by Maria’s paintings, calling them sincere, spontaneous, primitive and disquieting. Thanks to his influence Maria was able to have a Show in Paris.

Her work was included in the exhibition – “20 Centuries of Mexican Art.” Museum of Modern Art in New York.

Diego Rivera and David Alfáro Siquieros, prevent her from completing her project of a mural in National Palacio arguing that she did not have enough experience.

Maria suffers a heart attack that paralyzes the left side of her body. After much effort she is able to paint again, but without reaching the same level of skill.

Maria Izquierdo’s name is included in the list of 17 Mexican artists enscribed on the wall beside the monument to José Clemente Orozco. She is the only woman to be included. Año de las Artes Plásticas de Jalisco, Guadalajara.